There was a time where you couldn’t miss The Footy Show, but that hasn't been the case for a while.

And so on Thursday, as a new talent line up was finishing its seventh episode of a refreshed format, the Nine Network put The Footy Show to bed forever. 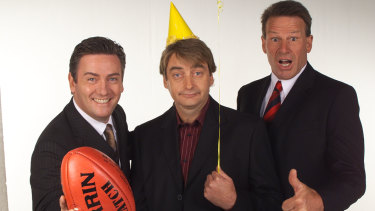 Eddie McGuire, Trevor Marmalade and Sam Newman were the The Footy Show’s original panel line up.

That it lasted as an hour-and-a-half-plus, live television program for more than 26 years is remarkable, but like its long run on our screens its demise spanned across decades.

It’s too simplistic to say there was one moment in time where the show lost its way because even during the nineties and early 2000s, a period considered to be the program’s “glory days”, controversy was never far away.

That was part of its charm. The Footy Show always lived on the edge, thanks to its original line up of host Eddie McGuire, Sam Newman, and comedian Trevor Marmalade, plus the fact it was live.

Sometimes even the greatest bands when they re-form aren’t quite the same.

Harvey Silver, the man who came up with the show's concept and its producer from 1993 to 1999 (before he returned for one year in 2018) described it as "revolutionary".

“Bringing in the current players on the panel was unheard of. For them to come in and show their personalities and show they were more than just robots was genuinely revolutionary," Silver told The Age.

“Sometimes even the greatest bands when they re-form aren’t quite the same," Silver said of the 2018 return to the show of McGuire and other former backroom staff. "I just think people’s tastes have moved on a little bit and The Front Bar is a very good show.

“In a lot of ways the 2018 Grand Final Footy Show was the swansong. The show that was on air this year was The Footy Show in name only."

Controversy was constant. In 1999, Newman appeared in blackface when legendary indigenous player Nicky Winmar cancelled an appearance, for example.

In 2008, Newman dressed a mannequin in lingerie and attached a picture of The Age’s former chief football writer Caroline Wilson to it before groping it.

The Nine Network stood Newman down briefly after the stunt. But he soon returned despite offering his resignation, and up until his last appearance on the show in 2018, Newman came under constant attack for inappropriate comments, usually involving accusations of sexism.

Around the outrage there was also gold. The time Marmalade couldn’t get a robotic, singing fish to stop dancing, for example. When Shane Crawford raised nearly $500,000 for breast cancer by running across Australia. The episode where Newman slapped a cake in David Schwarz’s face and the moment in 1995 when McGuire announced on air that Ted Whitten had passed away, moving Dougie Hawkins to tears.

Glenn Manton, a 1995 premiership player at Carlton, was a regular panellist on the show during the nineties and early 2000s "glory days".

"The great aspect of The Footy Show in its glory days was that you had to be able to respond and interact with the other panellists, hosts and content instantaneously, in what was an unpredictable and most often fun environment," Manton told The Age.

"The sad thing is that it didn’t evolve and maintain a clever element of wit, it became cheap and predictable instead of involving people who had thoughtful, diverse and challenging opinions it relied too heavily on the mainstream sludge.

"It was such an important part of Australian television. Live television is a gift. It was a privilege. I saw it as a privilege to be involved in that live space.

McGuire stepped down as host in 2006 when he became Nine Network’s chief executive. New hosts Garry Lyon and James Brayshaw kept the steady for a while but some see the axing of Marmalade in 2009 as a watershed moment. 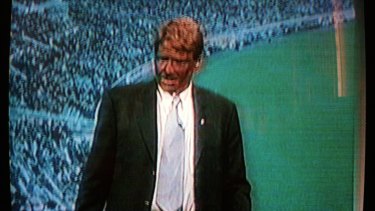 Sam Newman in blackface after Nicky Winmar didn’t appear on The Footy Show in 1999.

“I do think the people who made that decision didn’t understand what he brought,” Silver said.

“He gave the show a pace and a meter than it needed when at times the show may have been flagging or dragging and he would come up with a pearler and the show would be right back on track.”

Rebecca Maddern joined the hosting line up in 2016, which was welcome. Craig Hutchison’s hosting debut in 2017 less so, eventually replaced by the returning McGuire. But not even his intervention could save The Footy Show.

“There’s a lot of people, maybe in the media, who will death ride the show and maybe enjoy giving it the last kick," McGuire said on Triple M on Friday. "I hope they don’t do that because it’s put a lot of kids through school and put meals on tables.

“All things must pass, 26 years it’s been the longest running show in the history of sports entertainment.

''It was the first sports entertainment show that went on prime time."