About a decade ago, Welsh-born Dylan Williams joined a group of 40-something Swedish men in a synchronised swimming group. 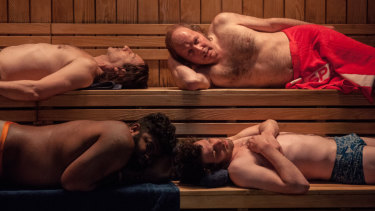 A group of down-on-their-luck 40-something men become synchronised swimmers in Gilles Lellouche’s Sink or Swim.

Williams had left a well-paid job in the British media to marry; in Sweden, he worked as a bin man. The relocation, the language difficulty, the loss of self, left him feeling bereft. The other men had a similar purposelessness. In Men Who Swim, the documentary Williams made, one of them describes it as the moment you realise you are never going to become a rock star. They chose to become synchronised swimmers instead, said one of the founders, "as a protest against the meaninglessness of life".

That film played in France and Britain in 2010. Nine years later, two films based on the documentary have washed up here in the space of a few months. The English film Swimming with Men opened in Australia first, with a distinguished cast (Rob Brydon, Jane Horrocks, Rupert Graves) and Dylan Williams as executive producer.

Arriving later, but completed before, is this French comedy with almost the same plot and a similarly solid cast, at least in French circles: Mathieu Amalric, Jean-Hugues Anglade and Guillaume Canet. The films are alike in many ways, borrowing freely from the documentary, but the ways in which they differ are also instructive. 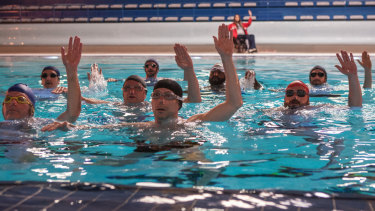 The movie was a hit in France and lands in Australian cinemas this week.

The French film, screened out of competition at Cannes last year, was an enormous hit in France, with more than three million admissions. The English film died a death in its home market. Both were made as feel-good movies, the story of a bunch of sad losers who find fulfilment and purpose in a ridiculous but joyful pastime.

The feel-good genre is an English specialty: indeed, the producers of SWM labelled their film "The Full Monty in Speedos". French cinema has no direct equivalent. French comedies may be broad, slapstick and full of exaggeration (like the Asterix series) but they have a different style – less stridently directorial, less packaged.

What do I mean? In an English feel-good movie, the style becomes part of the joke. Almost inevitably, we get the slow-motion walking shot, four or five men abreast, marching into whatever calamity they face, with heavy musical accompaniment and a lethal dose of irony. French directors almost never do that kind of shot – but that's exactly what Gilles Lellouche does here, in his bare-faced borrowing from his British cousins.

This is basically a French version of a British film – a sentence I never expected to write, given French pride and 1000 years of cross-Channel rivalry. Perhaps that is why the French audience embraced it. The blokes-in-trouble style has been done to death in Britain, but it's relatively new to French audiences.

Sink or Swim (original title, Le Grand Bain) is set in Grenoble and makes good use of dramatic alpine backdrops. Mathieu Amalric's Bertrand has been depressed for two years, after losing his job. In the swimming group, he finds many kindred spirits: an executive whose wife has left him (Canet), a failed rock star with 17 self-issued albums and no hits (Anglade), a salesman slipping into his fourth bankruptcy (Benoit Poelvoorde) and a couple of other misfits.

Their coach Claire (Marina Fois) is an alcoholic former champion who's as lost as they are. Various women gloat and jeer as the men waggle their legs in the air; they push on regardless towards the World Championships in Norway.

You can guess the rest but I was surprised by the film's deep-seated concerns about the lives of these men of a certain age. That's its real reason for being and it's as dangerous as the idea of men doing sync-swimming. In the era of #MeToo, a film that demands sympathy for the psychological plight of men in their 40s is likely to cop a certain amount of derision.

No matter: the film boldly goes where no French film has gone before and with enough humour and heart to defuse such ungenerous thinking. Yes, it's a bit wet, but what else could it be?