Outside of 2020 being known as the year of the pandemic, it could also go down as the year events finally embraced the virtual. Virtual film festivals and conventions have existed prior to our current global health crisis, but this new normal marks the first time major events like San Diego Comic-Con have moved the physical experience of being in the room where it happens to the online sphere.

Comic-Con 2020 At Home was a gamble, and it’s one that had to come together quickly. The resulting event this week should receive some credit for existing at all — it would have been far easier to postpone or cancel the entire convention. But what transpired over the past few days can serve as a lesson to other organizations facing similar real-world restrictions. A key takeaway: putting pre-recorded panels online and closing off the comment section on YouTube does not equal true interactivity — and without an robust interactive component to entice fans, it is hard to keep them absorbed in the action. It winds up being a loss for both the consumer and the studios and networks marketing their offerings.

According to Comic-Con Spokesperson/Chief Communications and Strategy Officer David Glanzer, the process of transitioning the event to an online forum held out as long as possible. As stay-at-home orders were implemented across the country, the event was hopeful they’d have to make some modifications but could still hold a physical Comic-Con. This explains why, to fans and others who go to Comic-Con, they seemed slower to announce a virtual event in comparison to other big comic conventions like Wizard World.

“The thought of an online version began shortly after the governor of California said something to the effect that he couldn’t imagine concerts or large gatherings at least until August,” Glanzer said. “It was a heartbreaking realization and it took a little time to digest that. But almost immediately we thought two things, a) is an online version possible? and b) if so, how do we make it happen?”

Comic-Con isn’t just a place to indulge in genre fare like comic books. In the last decade it’s become a major marketing tool for films and television shows to showcase their upcoming features. It’s one element fans are certainly missing with this festival. The majority of the panels are pre-recorded via Zoom, leaving no audience Q&As or a way for fans and talent to come together. Much of the online experience people are seeing this weekend is the result of working in uncharted territory in a short amount of time, according to Glanzer.

Fans online were certainly interested to see how SDCC, which draws a reported 135,000 people yearly to the sunny climes of San Diego, would deal with the ongoing fallout of COVID-19. Terence Johnson, a blogger and cosplayer who would have marked his sixth Comic-Con this year, tells IndieWire he was definitely still thinking of going as far back as March or April because “I still love being amongst that community.” But he says he knew “in the back of my mind” they would have to modify the event considering Comic-Con’s well-known lines and crowds being inhospitable to social distancing.

For Tony B. Kim, a Comic-Con vendor who works with the fashion brand Hero Within, says he was at another convention — the equally popular C2E2 in Chicago in March — right as COVID-19 was tearing through the Pacific Northwest. “There was a general anxiety among the exhibitors,” he said. The added lack of crowds and the fact the event wasn’t sold out left many thinking that even if SDCC put on the event in-person, fans might not want to risk exposure.

And it’s not surprising. Nearly all the people interviewed for this story talked about “con crud” or “fest flu,” the illness that usually develops as the result of four days running around a crowded convention center on little sleep and no food. For Kim, prior to the pandemic, he had a strict regimen he’d engage in prior to attending to Comic-Con. “Seven days out [I’d] start on Vitamin C supplements, preparing my immune system to go into a con,” he said. He also made a point of increasing his handwashing upon arriving at the event. 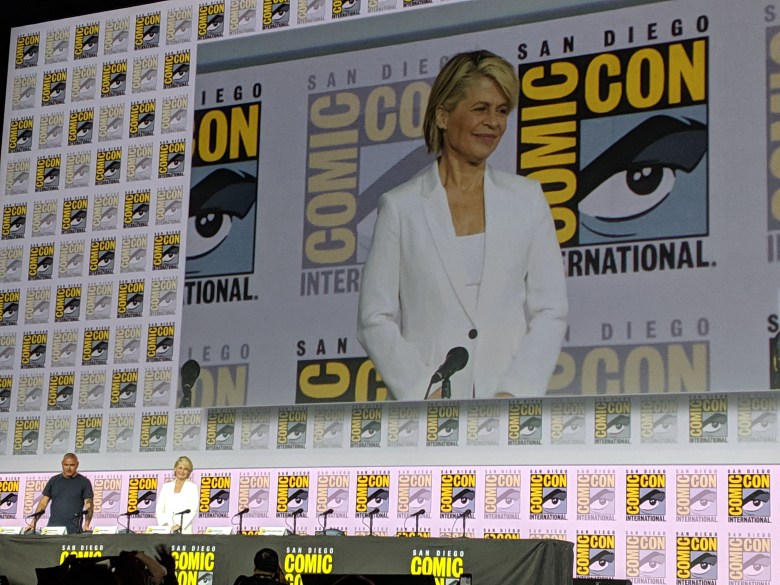 Linda Hamilton appears at the “Terminator: Dark Fate” panel at SDCC in 2019.

“There are things you just don’t think about prior to a plague,” joked Johnson, who says he certainly made a point of washing his hands and reminding himself to eat. But he notes that in a situation like Comic-Con, where people are shoulder-to-shoulder for large swaths of time, it’s all but impossible to keep yourself completely safe. More often than not, most attendees didn’t really think about it; blogger Allison Hazlett says she’d often provide cough drops to people who were sick, but says she never really thought about her own health in years past.

For merchants and bloggers, though, there’s a double-edged sword to attending a convention virtually. In Kim’s case, he knew his company would suffer a financial hardship in January when overseas factories that produce his clothing line started to shut down. And being a clothing vendor, it’s hard to get people to buy things sight unseen. He couldn’t give specifics but says the company is tracking 40% behind where they usually are by this point in the year, and they and anticipate losing half their income for the year because of the lack of a physical event.

“Our business is a clothing business so that means a lot of high contact, a lot of people coming in [and] trying on clothes that other people tried on,” he said. Kim explained that Comic-Con is one of the company’s highest performing shows of the year, both in terms of sales and brand promotion. He said that while virtual Comic-Con has been great to bring fans access to film and television, there’s been little to mimic the experience of making sales for vendors. “Right now it doesn’t feel like anyone’s figured out how to make a replacement for the live event,” he said.

But there is certainly an upside to a virtual component. Disabled fans, long shut out of conventions due to crowds and accessibility concerns, are finally able to engage in the Comic-Con world. “While we knew this would be a difficult year…we still wanted a place for the community to gather,” said Glanzer, so this meant eliminating the pay wall and making the event free to everyone.

For Tatiana El-Khouri, who’s been attending Comic-Con for 15 years, the lack of interaction with friends — many she might only see during the event — is sad but the virtual festival allows for the event to go back to basics. “As Comic-Con has grown there has been a shift [toward] this is the main pop culture event,” she said. “And now with virtual Comic-Con people who are actually interested in the community and are diehard fans are showing up.”

And while SDCC is, at the moment, set to return in its physical form next year many questions remain. As Glanzer says, “No in-depth discussions have taken place regarding during an entire online event next year” but he is open to the possibility of doing more with an online component in some form going forward. He says they will be looking at social media response and emails to judge the success of this year’s event and where things could turn going forward. 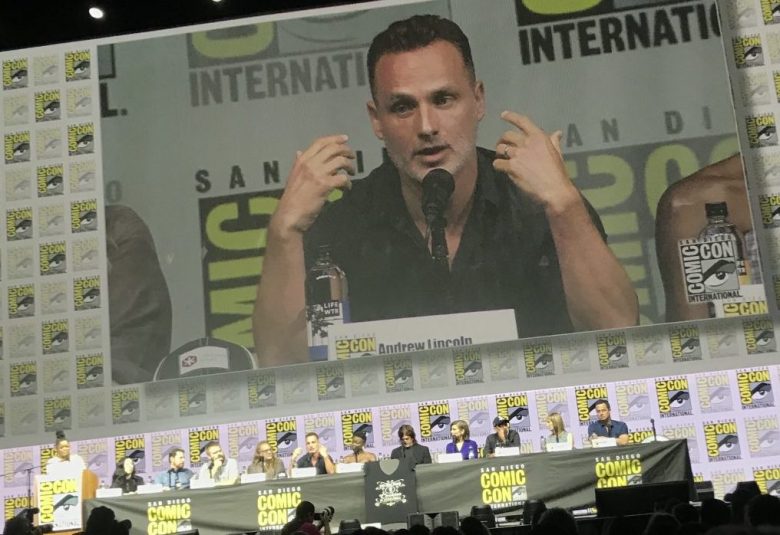 Publicist Lana Walker says she believes Comic-Con 2021 will go on “whether America has it under control or not.” Considering what big business Comic-Con does for marketing, it benefits them more to have a physical show. The difference, Walker foresees, is that who will be asked to participate might change. While stars are making themselves accessible for virtual events, that might change if they feel unsafe attending. Hazlett sees a similar downsizing of press and talent, with it becoming harder for smaller outlets to get press credentials or access to the talent so as to limit transmission.

Walker hopes this doesn’t happen, as a key element of the event is the tactile quality of touching items or brushing elbows with people. She hopes it doesn’t become a strictly transactional experience moving forward. Johnson says a physical Comic-Con in 2021 might force the organizers to utilize the beauty of San Diego itself. “This moment has exposed what works and what doesn’t,” he said. “They’ll be paying more attention to the flow of people…they’ve got the baseball park right there in the marina, so they’ll probably open up a bit more.” Johnson also sees the possibility of Comic-Con charging for a virtual component to limit crowds, possibly charging for virtual 1:1s or seeing panels unavailable to everyone at home.

As far as attendees, there’s a mixed opinion as to whether a physical festival will return and, if it does, whether they feel comfortable going. Kim and Hazlett don’t see the ability to pull off a show with that many people unless there’s an active COVID-19 vaccine available. “No one wants to be the first show to take on the coronavirus,” Kim said.