I wish I could fully convey how happy the news that Sarah Drew is returning to Grey’s Anatomy makes me. April Kepner was done an injustice when she was (prematurely!) written out of the series. *sigh* Thankfully, Dr. Kepner will make another appearance on the long-running medical show’s 17th season. Before you get too excited, it’s for a guest appearance. But, still! It’s better than nothing, right? I’ll answer for you: RIGHT.

Deadline broke the news that Sarah Drew will reprise her fan-favorite role as the smart, kind, and complicated trauma surgeon. As a passionate Japril fan, I’m obvs wondering what will happen when Jackson Avery sees his ex-wife again. I know she’s married to who shall not be named and all, but Japril has chemistry and I want to see it one… last… time. 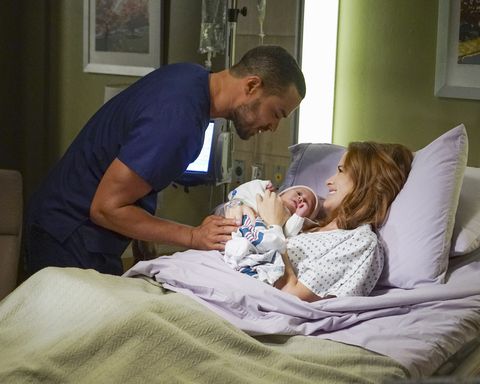 Am I being a tad dramatic? Maybe. But, I have good reason to be. Showrunner Krista Vernoff pretty much admitted that Grey’s doesn’t have a lot of life left. (Time of death: To be determined.)

“I’m planning a season and a finale that could function as either a season finale or a series finale,” Krista told The Hollywood Reporter regarding the future of Grey’s. “I’m planning for both contingencies and it’s hard and it’s not ideal. It’s not where I wish we were.”

She continued, “I’ve told them that I have to know before I’m making the finale what we’re making. Because there are a couple of character threads that will change. I’ve got plans for both contingencies. Either there will be closure or I will build something in that allows me to have a bit of a cliffhanger and a thread for next season.”

Ugh, who am I kidding? This is Grey’s Anatomy.

You love all the deets on Grey’s Anatomy. So do we. Let’s overanalyze them together.