How would you like to find yourself living inside a classic movie musical? Your answer to that may very well determine how much you’ll enjoy Apple TV+’s new comedy Schmigadoon! (premiering Friday, July 16). It’s a very affectionate, very specific parody of Golden Age musicals, and theater nerds will undoubtedly adore it… but others might be put off by all the excessive cheer. (The exclamation point in the title is there for a reason.) After watching all six episodes, though, I can say that it fully won me over: The cast is top-to-bottom fantastic, the enthusiasm is infectious, and the sharp jabs it takes at the genre’s wheezy old clichés give it a distinctly meta edge.

Sketch comedy veterans Cecily Strong (SNL) and Keegan-Michael Key (Key & Peele) star as Melissa and Josh, a pair of doctors who fell in love but have since drifted into an unhappy rut. They go on a couples’ retreat to revive their romance, and while they’re backpacking in the woods, they stumble upon a magical land where the peppy citizens greet them with an elaborate song-and-dance number. She’s a musical fan, so she’s charmed… but he’s not. And there’s a creepy, Twilight Zone-y twist, too: They can’t leave the town and get back to their lives without finding true love. (And they haven’t found it with each other, apparently.) 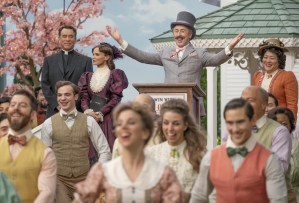 Inspired by the likes of Brigadoon, Oklahoma! and The Music Man, the town of Schmigadoon is a triumph of imagination — and of production design. Its citizens are familiar types, from the mustached mayor (Alan Cumming) and the whip-smart schoolmarm (Ariana DeBose) to the bad-boy bachelor who can’t be tamed (Aaron Tveit) and the little kid with an adorable lisp (Liam Quiring-Nkindi). The colorfully elaborate sets and costumes are worth the price of admission alone; they’re an absolute feast for the eyes. (The sets are both wonderfully immersive and slightly artificial, with a faint whiff of theatricality to them; we can almost see the seams.) The original songs mimic beloved showtunes, and the townsfolk happily perform them in zesty, full-scale dance numbers. So for fans of classic musicals, it’s a delight just taken at face value.

This town has decidedly old-fashioned values, though… which is a nice way of saying they’re all painfully regressive. (They can’t believe Melissa is actually a doctor: “But you’re a girl.”) Kristin Chenoweth plays town scold Mildred Layton, who won’t even allow Melissa and Josh to stay in the same room at the local inn, since they’re (gasp!) unmarried. Luckily, Melissa is a musical expert, so she knows what to expect, and through her eyes, the show gleefully takes aim at the musical genre’s problematic clichés, with lots of knowing winks to the audience. (“Women were so underwritten in early musicals,” she sighs.) Schmigadoon! manages to dissect the genre and celebrate it at the same time, pointing out its glaring flaws while still embracing its virtues. 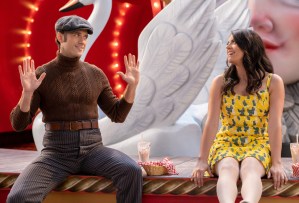 The actors are clearly having a ball, too. Strong is great and goofy here, in one of her best roles yet. (The Sound of Music-esque tune that Melissa sings to teach the locals about a woman’s reproductive anatomy is a hilariously naughty highlight.) We know Key is a tremendously gifted comedian, so it’s frustrating to watch him mostly play the humorless straight man here, but he does have a few zany moments. And the supporting cast is almost embarrassingly stacked: Tveit and Cumming are especially good, as are Jane the Virgin‘s Jaime Camil as the dashing town doctor and 30 Rock‘s Jane Krakowski as the glamorous Countess. Most of them only get a scant few minutes of screen time, though, unfortunately. I almost wanted the show to be longer than six episodes, just so we could see more of these great actors inhabiting this weird world.

The story does get a little cutesy and simplistic at times, almost like a kids’ movie. (Co-creators Cinco Paul and Ken Daurio are best known for their work on the Despicable Me franchise, which makes a lot of sense.) Most of the songs end up being too faithful to the genre: They could fit right into a classic musical soundtrack, but they lack an inspired comedic spin. I found myself wishing the show would go further, hit harder, follow through on its more savage instincts. But it does build to a satisfying finish, echoing Pleasantville as the two outsiders kick off a chain reaction of chaos in town with their new-fangled ways. It just goes to show you: Even old stories can always be rewritten.

THE TVLINE BOTTOM LINE: Apple TV+’s Schmigadoon! is a colorful treat for fans of classic musicals, with enough satirical bite to cut through the sweetness.