UPDATED with winners: Still I Rise Films has set 11 recipients for its inaugural Still I Rise Films Fellowship, a program that will offer financial and mentorship support to complete winners’ 15- to 30-minute short films. The list came from more than 90 submissions, with a total of $55,000 in support to be donated.

Fellows will also participate in an online rough-cut lab with peer feedback and one-on-one mentorship with Mimi Chakarova, founder and creative director of Still I Rise Films, and Hélène Goupil, 2020-2021 SIR fellow and series producer; and a MasterClass on Distribution and Impact led by Liz Manashil, former manager at Sundance Institute’s Creative Distribution Initiative, and Kristen Fitzpatrick, managing director at Field of Vision and a former director at Women Make Movies.

“Still I Rise Films exists to provide a platform and support for visual storytellers who take risks and challenge the norm. Each of the 11 women filmmakers chosen for this year’s fellowship understood how important it is to create documentary work that changes perceptions through personal, intimate narratives,” said Chakarova. 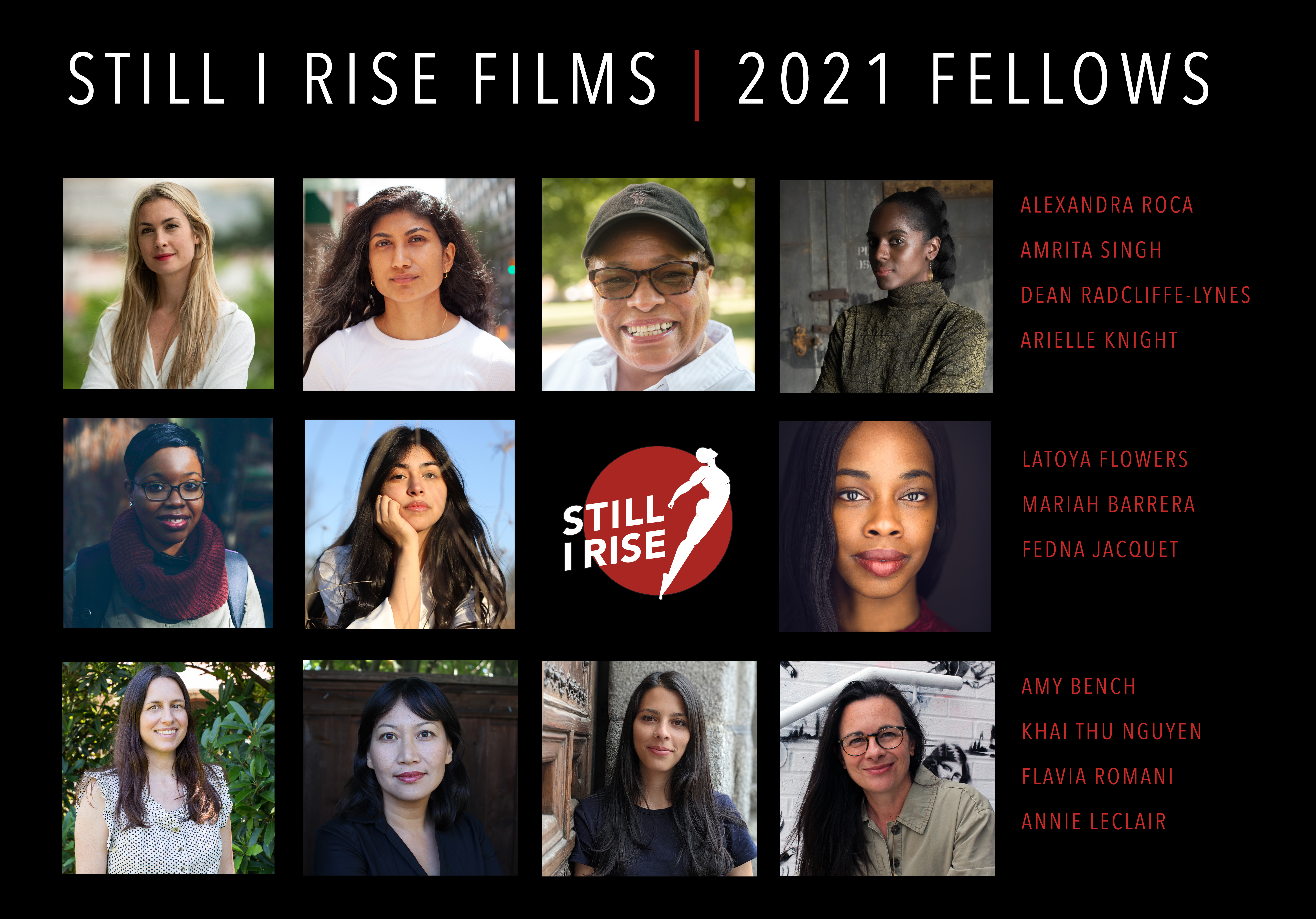 CHANTE MANMAN MWEN (MY MOTHER’S SONG) (Dir. Fedna Jacquet)
Chante Manman Mwen (My Mother’s Song) follows the journey of Raymonde Jacquet, a Haitian woman who survived being born into the poorest class of the Haitian social system and reinvented herself as an essential medical worker in Boston, Mass. We hear her harrowing story of strength and survival intermixed with a powerful musical performance sung by the heroine herself.

FREED (Dir. Annie Leclair)
As women with a disability, their lives have been indelibly impacted by circumstances beyond their control, but for them, motherhood has spurred the desire to rewrite their own narrative. Documented over several years, FREED is a rare and deeply moving immersion where strength and vulnerability lock horns, and where these women strive for healing and fulfillment.

IF YOU DON’T ACT AS ADULTS, WE WILL (Dir. Flavia Romani)
Grit, persistence, and tenacity drive activists to change the world, with kids in Latin America leading the way.

LIFE HAPPENS (Dir. Dean Radcliffe-Lynes)
Nicole made a decision that resulted in her being arrested and taken away from her family, however, it awakened a desire and lifetime commitment to advocate for individuals directly impacted by an unjust criminal justice system.

MEMOIRS OF MAY (Dir. Khai Thu Nguyen)
After living her whole life in the shadow of her famous painter husband in Saigon, at 66 years old, May takes life into her own creative hands by writing a memoir.

MY BROTHER’S KEEPER (Dir. Mariah Barrera)
A lyrical meditation on Barrera’s father’s and uncle’s experiences with brotherhood, incarceration, and the relationship between the two.

QUIET AS SHE IS (Dir. Arielle Knight)
Filmmaker Arielle Knight interviews members of her family matriarchy around the themes of loss, motherhood, and silence in an effort to shed light on the invisible trials that immigrant women bear.

STILL SEARCHING (Dir. Latoya Flowers)
In 2020 Damon Lamar Reed, a Chicago hip-hop artist and muralist, started painting a vivid series of portraits titled “The Still Searching Project” of missing Black women and girls in the Chicagoland area for the past two decades. Due to their lack of local, national, and global media coverage, he is utilizing his artistry as social justice.

TAMGLISH LORE (Dir. Amrita Singh)
A mixed-media character portrait of Shanti Nelson, a grandmother with a special sense of humor and inspiring resilience that speaks to her unique perspective as a woman shaped by her experiences living in Nagercoil, India.

UNTITLED (Dir. Alexandra Roca)
Hope is what Diane has been holding on to since addiction took over her son’s life but how much is too much?

UNTITLED MUGENI FILM (Dir. Amy Bench)
One night at her home in southeastern Congo, 14-year-old Mugeni awakes to the sounds of bombs. As her family scatters to the surrounding forests to save themselves, Mugeni finds herself completely alone. From there, she sets out on a remarkable solo journey across the globe, determined to reunite with her lost loved ones and lift up the Banyamulenge people.

PREVIOUSLY, April 8, 2021: Still I Rise, a documentary film series and distribution platform that aims to amplify female voices, is launching its inaugural Still I Rise Fellowship. The $50,000 grant, designed to provide monetary support to complete a 15- to 30-minute short film within six months, will offer $1,000-$5,000 depending on the needs of the project.

Along with the cash award, fellows will be able to utilize an online rough-cut lab with peer feedback, workshops and one-on-one mentorship with Still I Rise Films founder and creative director Mimi Chakarova and Hélène Goupil, the 2020-2021 SIR Fellow and producer for the series. Also available will be a MasterClass on distribution and impact led by Liz Manashil, former manager at Sundance Institute’s Creative Distribution Initiative, and Kristen Fitzpatrick, Managing Director at Field of Vision and former director of acquisition and exhibition at Women Make Movies.

Filmmakers are encouraged to explore mixed media, innovative sound design and fresh ways of telling stories much like the SIR film series, where the focus is on race and migration, exploring the personal experiences of individuals who have overcome adversity and are inspiring others to do the same.

“Since the beginning of my career, the lack of support for women in film has remained evident and fulfilling this need became the very foundation of Still I Rise,” Chakarova said. “Through the fellowship, we are honored to be able to foster talented women through mentorship programs and grants that will inspire the next generation of women filmmakers to make work that matters.

Applications are open now here. The deadline to apply is May 15, 2021.