Bradley Walsh welcomed four new contestants on The Chase this evening as they battled it out against the Chaser to win the jackpot prize. Ernie, Anita, Amy and Matt all tried their luck against Chaser Shaun ‘The Dark Destroyer’ Wallace but the quizmaster wasn’t impressed when one head-to-head didn’t go in his favour despite the player admitting she wasn’t feeling confident.

First to face the Chaser was Ernie, who earned an impressive £9,000 in his cash-builder round.

Despite encouragement from his teammates, Ernie decided to stick with what he earned.

Luckily, he made the right decision and made it through to the final after a one-question shoot-out.

Anita was next to face Shaun and followed in her teammate’s footsteps by adding £7,000 to the jackpot. 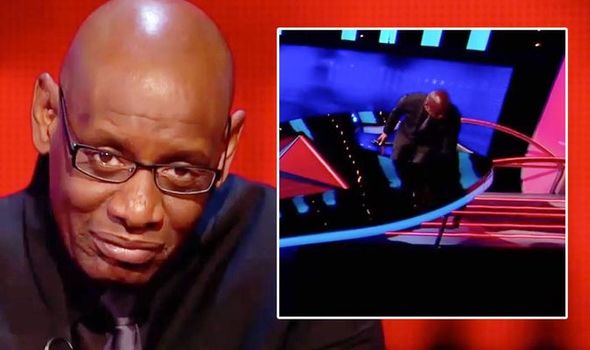 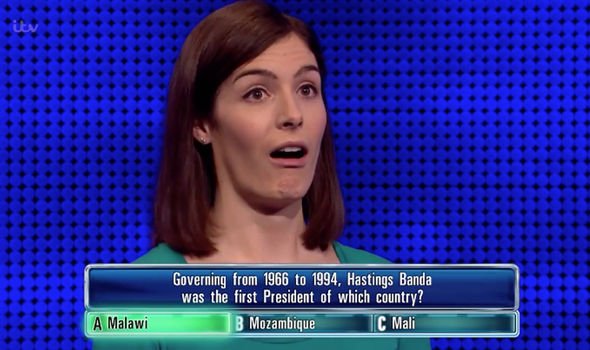 Amy didn’t perform as well in her cash-builder round as she answered four questions correctly.

The languages teacher admitted she didn’t feel confident but got off to a great start by guessing the first question correctly.

Bradley then asked: “Governing from 1966 to 1994, Hastings Banda was the first President of which country?”

The possible answers were: A) Malawi, B) Mozambique and C) Mali with Amy choosing the first option. 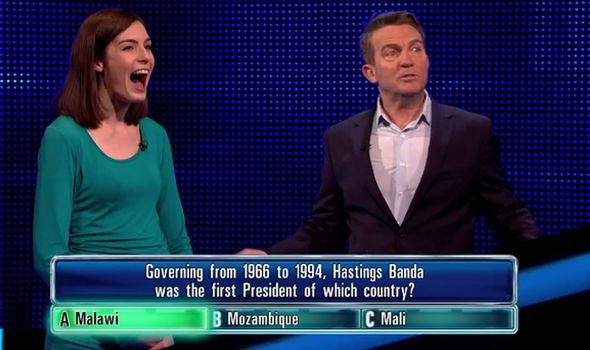 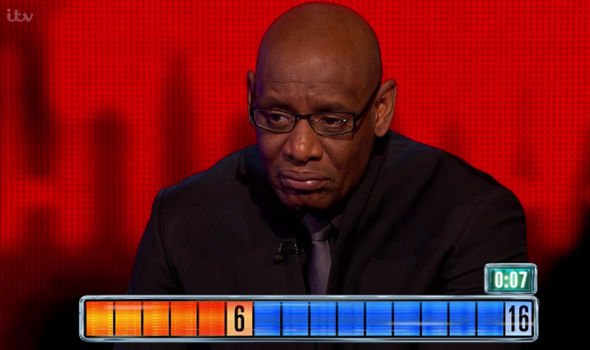 Bradley asked: “This I guess this would be another guess?”

“Well if it would be C or B, I would expect almost a French-sounding name and it’s not so I’ve gone for A because of that.”

“That’s a great answer if it’s right,” Bradley commented before confirming she was correct.

Realising the head-to-head wasn’t going in his favour, Shaun furiously shook his head, got up from his chair and jokingly said: ‘I’m off!”

“Get in!” Bradley remarked. “Well, to be fair, you’re right if it had been Mozambique or Mali you’d expect a French-sounding name.”

“Of course you would because you’re a languages student. See what I mean, bonnet de douche,” Bradley joked.

“Except Mozambique was a Portuguese colony,” he noted.

“Yes, but Portugal is very close to France. If you go through Spain it’s there,” Bradley added.

Amy made it through to the final and would have had two chances at securing her higher offer if she’d taken the risk.

Unfortunately, Matt didn’t make it through to the final and was stopped from adding £3,000 to the jackpot by Shaun.

In the final, the three contestants worked as a team and each won a share of £20,000.