Richard Hammond’s brand new survival series The Great Escapists lands on Amazon Prime on Friday as The Grand Tour host and Mythbusters’ Tory Belleci are left stranded on a desert island. The pair have to work together to build their way to safety but the former Top Gear presenter has revealed there was a point during filming where he feared he was a “goner”.

Speaking on Good Morning Britain, Richard said: “We did a scene where to try and get off the island we built a raft.

“We decided to power it with a steam engine which we took off the wreck of the boat that was shipwrecked.

“That was a good idea. We went out to sea with it, this is me and Tory Belleci from Mythbusters, he’s just brilliant.

“The only way to power it is with this steam engine burning wood but we ran out of wood so we had to burn the raft to power the raft.”

Read more: The Grand Tour Scotland special release date: When is series back? 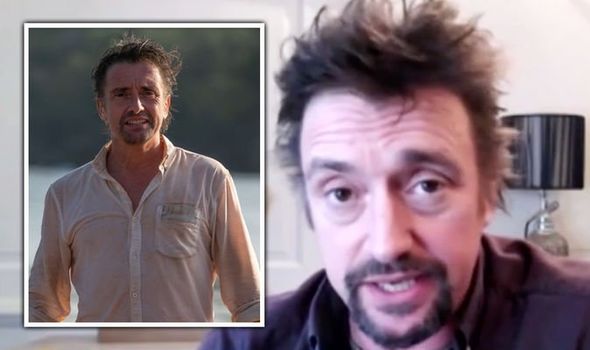 “That went wrong so we jumped off and as we were swimming somebody on the boat they were filming from pointed and said ‘Oh no,’” Richard continued.

“I heard it was a shocking creature the size of a school bus, was your first thought, ‘Clarkson?’” Piers Morgan joked.

“No, the first thought was shark. Tory shot off out the water like a missile leaving a submarine,” Richard replied.

“I had time to look down and see this thing curve around and think, ‘That’s that.’

“And then somebody shouted, ‘Whale shark they don’t eat people’ and I thought but what if he hasn’t got the message?

“I’m only small I could be like a piece of krill, I could have gone.”