Jeremy Clarkson, James May and Richard Hammond head to Madagascar for A Massive Hunt in the latest The Grand Tour instalment. After navigating the Mekong, the intrepid trio find themselves back on four wheels for their latest adventure on the exotic islands of Reunion and Madagascar. The presenters are given three sports cars and think they’re set for a nice holiday but things quickly spiral out of control.

The Grand Tour producer Andy Wilman has a surprise in store for the trio as he sends them across the ocean for another action-packed trip.

They must tackle the toughest road in the world, in some of the most extremely modded cars they have ever built, in order to complete one of their toughest quests to date – they have to find “pirate treasure”.

James is heard warning his co-stars “the roads are terrible in Madagascar” prompting them to to quickly adapt their cars.

Richard gets rid of his wheels, replacing them with digger-like tread and he’s certain this is the best idea. 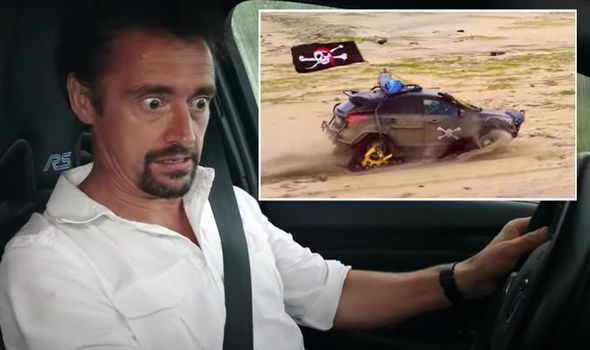 As he races along a stretch of muddy terrain, he declares: “This thing is unstoppable!”

Of course this is when chaos ensues as his car breaks down and Richard finds himself stuck in the mud.

But he’s not the only one facing car trouble as Jeremy struggles to get his modified Bentley over rocky terrain on the side of a hill.

He’s also seen racing along a beach as explosions appear to go off behind him.

Meanwhile, James is heard screaming: “Give me strength,” as he gets stuck in a muddy puddle.

It seems it all gets a bit too much for him as he’s later seen falling into a pool, exhausted.

Finally, Richard ends up almost burning himself in his car as he a mysterious bag full of steam.

The Grand Tour: A Massive Hunt is set to launch on Amazon Prime on December 18.

One posted: “Of all the injuries Hammond has suffered, burned balls sounds the worst.”

“It’s about time. And it’s time to make another one. Somewhere in Canada or maybe in the Desert in Arizona,” a third tweeted.

Someone else replied: “Really Happy to hear. But i hope you are able to raise the frequency between new episodes.”

A fifth continued: “That’s it, I won’t get a better Christmas present than that this year. Thank you!!”