“Icon” is the most overused word in film journalism, but there’s no other word to use when describing Charlie Chaplin. So famous that he all but created the idea of the movie star, he was the first person ever to conquer the entire world with simply a mass-produced image of himself — as his creation, the Little Tramp. See that bowler hat, those charcoal-lined eyes, that too-tight coat, baggy points, wobbly cane, and toothbrush mustache, and you know you’re seeing Charlie Chaplin. You may have never seen a Mickey Mouse cartoon all the way through, but you know Mickey Mouse. You may have never seen a Chaplin film either, and yet you’ll know Charlie Chaplin when you see him. There are many contrasting artistic renderings of Jesus. There is only one singular image of the Little Tramp.

From the title of their new documentary, you may think Peter Middleton and James Spinney have set out to achieve with “The Real Charlie Chaplin” what most other film history documentaries earnestly attempt: to look beyond the surface of their subject, whatever or whoever it may be, and capture its “real” essence. But from the opening frames, and an epigraph of a quote from Chaplin’s friend Max Eastman, they acknowledge that with Chaplin that’s impossible, and the title is a little bit of a joke. “Enjoy any Charlie Chaplin you have the good luck to encounter,” Eastman wrote. “But don’t try to link them up to anything you can grasp. There are too many of them.”

Directors of the inventive “Notes on Blindness,” about the blind theologian James Hull, Middleton and Spinney avoid an expansive, linear catalog of Chaplin’s life to deliver their own personal impressions about him instead. Clocking under two hours, “The Real Charlie Chaplin” is less concerned with being an exhaustive biography than trying to pinpoint what Chaplin’s life means to film history and how we might think of him today. It’s an approach that, while not entirely successful here, could help introduce newcomers to classic film rather than preach to the already converted.

That means entire films in Chaplin’s body of work — “A Woman of Paris,” “The Circus” — go without mention. Middleton and Spinney don’t give a damn that you know the difference between the shorts he made for Keystone, or for Essanay, or for Mutual, or for First National. Those are the kind of encyclopedic details that have bogged down other Chaplin documentaries.

It does feel like some of his greatest cinematic moments deserve a little more exploration, though. There’s only the slightest glimpse of “the dance of the rolls” from “The Gold Rush” or the dictator Hynkel dancing with an inflatable globe. No mention of his work as a composer, writing the theme music for all of his features (in addition to starring in them, directing them, writing them, and editing them), an act that in itself made Chaplin the most complete film artist to that point. If this is meant to be an introductory approach to Chaplin, for everyone who knows who Chaplin is but wants to learn more about him, those seem like important beats to cover.

Lingering a tad longer on Chaplin’s artistry would have helped helped answer why Chaplin was famous rather than just how he became famous. That in creating The Tramp, Chaplin embodied cinema’s original underdog, a member of the oppressed whose very costume — worn and cobbled together, but the attire of a gentleman nonetheless — conveys both the tatty reality he lives in and the dreams he aspires to. He is dignity personified in the face of societal indifference so absurd it can only be laughed at.

And while narrator Pearl Mackie declares upfront that Chaplin was “more famous than any king, queen, or emperor, more famous than any philosopher, artist, or religious figure” who had ever lived before, some of the more unprecedented expressions of that fame are left out of this documentary. That Chaplin was a pioneer of merchandising, and an inspiration to Walt Disney and George Lucas to come in that regard, isn’t addressed. Perhaps most understandable that it wasn’t mentioned, but the fact his body was stolen and held for ransom after his death — the kind of extremity that speaks to the almost-religious nature of his fame, his bones becoming a secular relic — would have spoken to that as well. 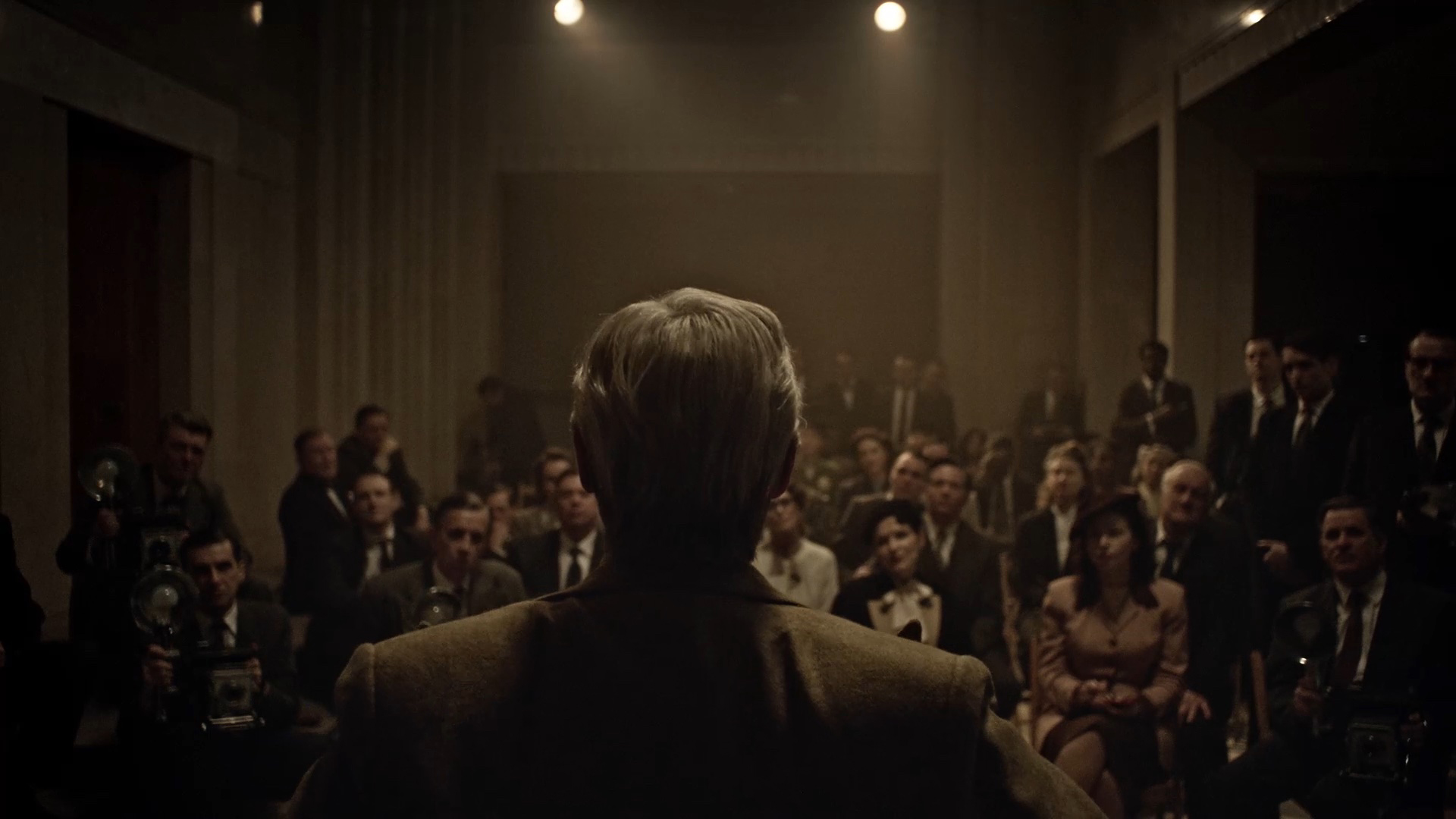 Chaplin confronts a hostile press corps in 1947, in one of the film’s reenactments

Instead the documentary focuses on the human drama in his life, drawing on rarely heard recordings made by Chaplin in his later years, as well as new interviews with his children Geraldine and Michael, and a stunning, never-before-heard audio recording of a childhood friend, Effie Wisdom, who grew up with him off Kennington Road on London’s South Bank. (Kevin Brownlow recently rediscovered the interview in his archive.) To novel effect, Middleton and Spinney use some of these interviews to stage reenactments, with actors lip-syncing precisely to the audio. Those who were appalled by Morgan Neville using AI to recreate Anthony Bourdain’s voice will probably hate this, as it allows the actors to add gestures and expressions denied the original speakers. But, more precise than just reenactments alone and more vivid than an audio-only voiceover, it feels like an expansion of the cinematic tools available to documentarians.

You never see the face of the actor playing Chaplin, however. Not even during the film’s most riveting scene, a reenactment of the notorious 1947 press conference (with the complete audio heard here for the first time ever) in which reporters harangued the actor about his alleged communist sympathies following the debut of his disastrously received “Monsieur Verdoux.” That press conference and the circumstances that resulted in Chaplin being barred from reentering the U.S. a few years later are brought to life with a viciousness few would have recognized at the time.

“The Real Charlie Chaplin” ultimately lingers on that point: Chaplin himself has never changed but our perceptions of him have. We may now think that him being run out of the country on spurious grounds is appalling. At the same time, we’re now disturbed and depressed by his treatment of women, something that barely made the news in his heyday, aside from the most salacious allegations and a “Maury”-worthy paternity case. The documentary gives substantial time to actual interview footage (not reenacted) of his second wife, Lita Grey, who he met when she was 12 years old. He cast her in his film “The Kid.” They married when she was 16 and he was 35. Speaking on camera in her 80s (she died in 1995 at 87), Grey talks about the maltreatment and retaliation she suffered at Chaplin’s hands, something that’s clearly haunted her entire life. Middleton and Spinney make the point that Grey was barely able to tell her story throughout her life, because interviewers would always bring their questions back to Chaplin’s genius.

This is a reframing that’s long overdue, and it’s a credit to the filmmakers, and the BFI, which underwrote much of the project, for undertaking this. There have been many excellent Chaplin documentaries in the past, including Richard Patterson’s “The Gentleman Tramp,” Kevin Brownlow’s “The Tramp and the Dictator” — probably the best one of all — and Richard Schickel’s “Charlie: The Life and Art of Charles Chaplin.” But none of them have told Grey’s story the way it is in “The Real Charlie Chaplin.”

No, it doesn’t mean we need to throw out Chaplin’s life and work altogether. It means that we have a more nuanced understanding of it. And that’s where, flawed though the film is, “The Real Charlie Chaplin” can serve as a step forward for documentaries about film history and an exemplar for those to come: that you can appreciate art without ignoring the faults of the artist, as so many have tried to do in the past. We still don’t know “the real Charlie Chaplin.” We never can, because, as Eastman alluded, there simply isn’t one Charlie Chaplin — he was many people, some good, some bad. And a human life can’t be reduced to just one thing. But that doesn’t mean we need to turn away from reality either.

“The Real Charlie Chaplin” premiered at the 2021 Telluride Film Festival. It will be released in theaters later this fall, then air on Showtime.