Movies theaters may be reopening their doors for a summer of superhero flicks and franchise tentpoles, but streamers — our cinematic saviors this past year — won’t be left out of the blockbuster game: Take The Tomorrow War, Amazon’s big alien invasion action flick now streaming on Prime Video. The movie concerns a war happening 30 years in the future, with humanity on the brink of extinction after a species of not-so-peaceful extraterrestrials arrive on Earth. A group of time travelers return to our present day to recruit soldiers and everyday civilians alike to be transported to 2051 and join the fight, with Chris Pratt starring as a high school teacher and veteran plucked from the past to save the world.

Betty Gilpin, meanwhile, plays his wife. Unlike The Tomorrow War‘s other supporting players — including J.K. Simmons, Yvonne Strahovski, Jasmine Mathews, Edwin Hodge and Sam Richardson — the GLOW alum and Hilary Swank-sparring star of The Hunt does not time travel into the action, nor does she get to flex her badassery as alien carnage rains down around her. As a devoted member of Gilpin Nation, this doesn’t do.

Which is just what I told director Chris McKay, who also chatted with ET about casting Pratt, the movie’s big twist and his hopes of bringing a certain Batman sidekick to the big screen soon.

I’d seen the trailer so maybe I shouldn’t have gotten my hopes up. But I have to say, I’m a bit angry at you, only because I wanted to see Betty Gilpin kick an alien’s ass.

Chris McKay: Yeah, I would love to have seen that, too. Betty is amazing, and I really hope that if we get to do a sequel, that we get to use more of Betty. Because there’s a scene that Betty did between her and Chris that was really great, and Betty was amazing. There are some takes with her that just anybody who watches her immediately tears up. Because she’s so good and so real. But it’s a scene, unfortunately for timing reasons, we had to cut. But it’s my greatest regret, honestly, on this movie, is not being able to find a way to make that scene work. But I’m hoping in the sequel, we’ll get the whole band back together: Betty, Sam, Chris obviously, everybody.

What was that tragically cut scene?

It was exploring Chris and Betty’s relationship a little bit more. It was early on in the movie, and it explored their relationship from her perspective. It gave you a little bit of color of how she felt when Chris, being disappointed with some of the things going on his life, disappears in his work and things like that. Her intensity and her vulnerability and her rawness were really on display in a really beautiful way. And I hope someday I can share it with people, because she is one of a kind.

Chris Pratt has established himself as part of this new class of action heroes. What did he have that you knew was perfect for this part?

Obviously, Chris can play a lot of different things — he’s Star-Lord, [he’s in] Jurassic World, as well as Zero Dark Thirty, as well as Her, and Parks and Rec, obviously — he can do so many different things. And yet, this kind of grounded character study was something that he really wanted to throw himself into. And I was game to do it, because I like a loose improvisational style. So, I want us to try different things in different takes. I don’t want to see the same thing over and over again. I want to keep trying to make it more and more real, make it more and more honest. And Chris is really amazing and open with his vulnerability. He’s willing to put himself out there emotionally, in every way. So, I got really lucky that Chris wanted to do this movie and was that giving. I mean, he’s just a really generous guy, as a human being, as well as an actor.

These are different characters, but how mindful do you have to be of making sure you’re giving a different flavor from Star-Lord or Owen from Jurassic World?

You try to be very mindful of that, whether it’s costuming choices, whether it’s the way you’re shooting stuff. We had Larry Fong as a DP, and there’s a realness to the thing. I mean, it’s a heightened realness, but there’s a realness. So, part of it’s the way you’re shooting Chris in these scenes. It’s surrounding him with other actors and production designing it in a way that feels real. It’s the kids in the classroom. It’s the way we decorated the classroom. It’s his house. I’m always mindful of how can we make this different than the last? Because you’ve got a movie star. It’s different when it’s a character actor, it’s a different part or something like that. When you’ve got a movie star that’s a brand, you want to make sure the audience gets a little bit of what they’re expecting from that guy, but also gets a little bit of something new. A little bit of something that’s a little different. I think we struck a really great balance with Chris on this movie. 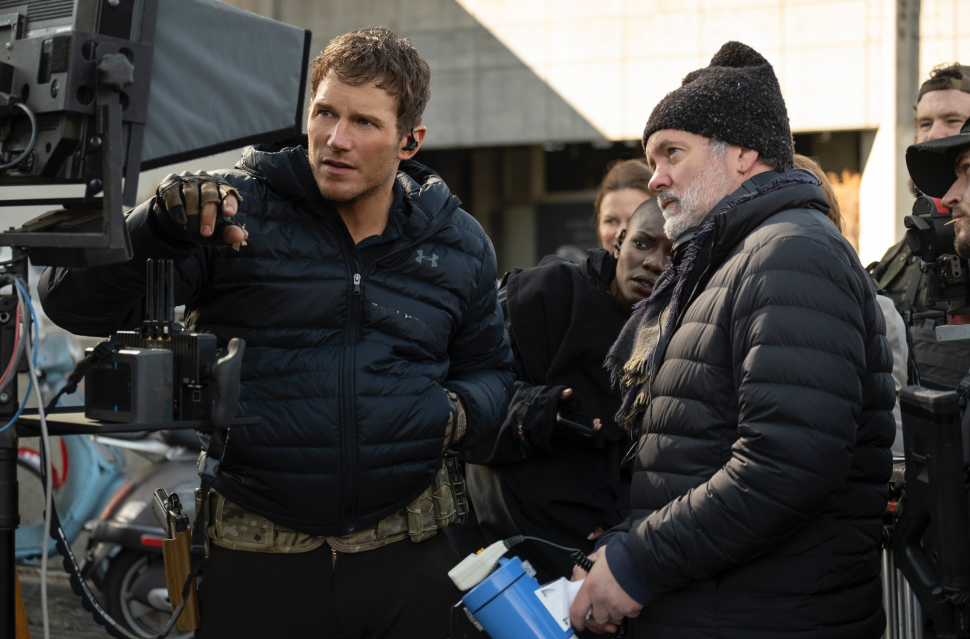 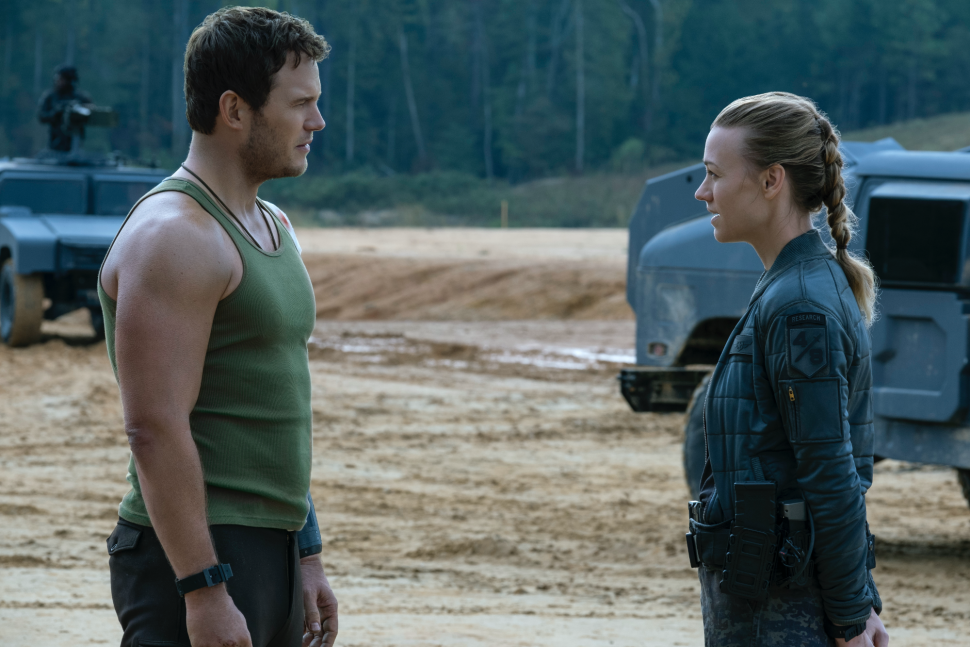 A lot of your supporting cast are actors known for comedy who are getting these heroic death scenes and big action set pieces. Who was having the most fun getting to live that action-hero fantasy?

Definitely Mary Lynn [Rajskub] was probably having the most fun. I think she was sending images to her kid from the set, so she was getting immediate feedback of how cool his mom looked. But having Mike Mitchell and Sam Richardson run around with a gun and rip off mags and stuff like that, everyone was having a good time. I also put everyone through military training. I wanted everyone, even the army of the ordinary, I wanted them to go through it, so they would know, like, “Oh, this is the right way to hold your gun. So, do it like this which is the wrong way to do it,” to show what a person who’s thrown into this might act and be like. Plus, I just really wanted to be responsible with the guns and that sort of thing. And get to bond — I think those things are fun bonding exercises. So, for three or four days, we had everyone do a whole military training, and they were gone all day long with Harry Humphries and his team.

Major spoilers for The Tomorrow War’s big twist below.

Story-wise, we get this reveal that yes, Yvonne is playing Muri. How conscious did you have to be about calibrating that, that some people may guess it right away and for some it would be the big twist of the movie?

Twists are such a tricky thing nowadays. We’ve [seen] a lot of movies that do that sort of thing, so we’re all very conscious of that when we watch trailers. The audience that saw the movie in test screenings really loved the movie, and they went in with as little information as possible. I think you can still have a really good time if you think you know what it is. It’s one thing if people guess it and they guess it right, that’s good. That shows that people are already actively engaging in the movie at some level. But I think we shouldn’t confirm it. Let’s at least let them go and enjoy the ride.

Because I think even if you know some of these twists are coming, you’re still going to go through the emotional experience of a father and daughter and Chris and [J.K. Simmons] — a father and son story — and what those things mean to each other, and how Chris changes as a result of what he goes through and what he sees. I think that you’re still going to have a satisfying experience, even if you guess what [the twist] is. I just don’t want it coming from the filmmakers or Amazon. Let’s not have that in the trailer. That’s where I draw the line. We should let people have the best, purist experience humanly possible, and then if they’ve already guessed it, I mean, they’re very observant. There’s a lot of movie tropes out there and whole websites and YouTube channels that are literally about tropes. [Laughs] I think we have to get smarter from a marketing standpoint of how we do stuff like that.

Before I let you go, you’ve been attached to a number of very cool sounding projects in recent years: A Nightwing movie, Johnny Quest, you mentioned wanting to do a sequel to Tomorrow War. What’s the state of your union of what’s still in the works and what you’re still excited about?

They’re all still in the works. In fact, we just turned in a script for Johnny Quest last week. So, they’re still stuff that we’re developing. Nightwing is a movie that I really want to do. I really hope that DC and Warner Brothers are buoyed by their recent successes, and they still look at a character like Nightwing — Dick Grayson — as a potential big movie. Part of that is also me showing them. If I can show them this movie and hopefully they’ll see, “Oh yeah, we can do a really great Nightwing movie together.” It’s been on the back burner, because they’ve got a lot of other things that have been on their minds. I’m hoping that maybe in success with Tomorrow War, they’ll want to do it.