What’s that sound you hear? Likely the entire audience of The Walking Dead saying in unison “Finally!” because a certain character that we’ve loathed since the moment they were introduced at last was turned into Walker Chow. But let’s not rush to that happiest of endings — happy for us, anyway. Let’s first set the table, so to speak, for the main course.


Early on in “A New Deal,” Daryl’s standoff with Lance’s troopers was concluded by Carol’s timely arrival with Pamela and Mercer. Carol, as hinted at last week, had struck a deal with the Commonwealth’s governor that would allow her and her friends to skedaddle with supplies to rebuild their communities while Lance replaced Sebastian on the hot seat. Which was all well and good for Maggie, Negan & Co. but not so hot for the denizens of the Commonwealth. So Max took matters into her own hands, tricking Pamela’s son into being his usual D-baggy self… and secretly recording his rant about how the CW’s citizens are too stupid to realize that the game is rigged so that the poor would always stay poor, and the rich would only get richer. 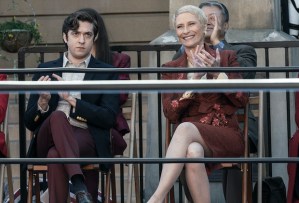 Next, Max had Eugene play the tape over the loudspeakers at the Founders’ Day event. In no time, a riot broke out, one that was made all the more chaotic by Lance’s machinations from behind bars. Turned out, he had Shira and Calhoun murder the Founders’ Day custodial staff so that they’d reanimate and wreak havoc. And whoo boy, that they did.

Knowing full well that it was Max who’d recorded him, Sebastian chased after her until he saw an opportunity to point a walker at her. She might’ve been bitten, had Eugene not ridden to the rescue and pushed the zombie at Sebastian, who screamed for help that absolutely no one in the crowd was willing to give him. In the end, he was bloodily, fatally bitten in what will have to do down in the series’ history as one of its most satisfying deaths. 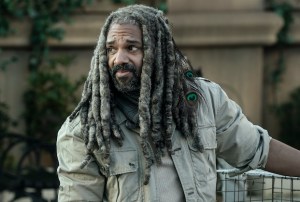 IN OTHER DEVELOPMENTS… | As Lydia and Elijah took off with Aaron and Jerry to check on Oceanside, we learned that the youngsters had become sweethearts. Though Annie’s amniotic fluid was high — and becoming a father-to-be had greatly altered Negan’s perspective — she remained determined to make tracks from the Commonwealth. Just as Judith struggled with leaving another home, Daryl struggled with his role of stand-in parent. And Ezekiel let Carol know that he would be staying put and “helping the people of another Kingdom before it falls apart.”

So, your thoughts on “A New Deal”? Did you cheer out loud when Sebastian was bitten, or did you manage to use your inner voice? Read EP Angela Kang’s recipe for his just desserts here.