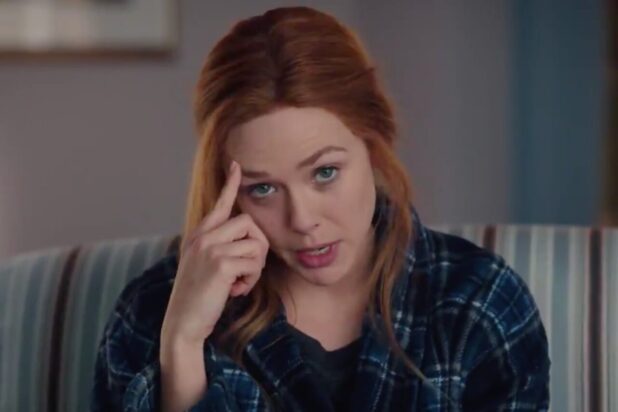 (Warning: Spoilers for “WandaVision” Episodes 6 and 7 ahead)

“WandaVision” is officially entering the 2000s. More specifically, 2009, if the latest clip from the series is any indication.

Marvel released the sneak peek at Episode 7 on Thursday, showing Wanda talking directly to camera about how she’s handling the fallout of unexpectedly widening the Hex in last week’s episode. The 1:22 clip seems to follow through on a tease Kevin Feige gave back in November, telling Empire that the show will “go up to the ‘Modern Family’ and ‘The Office’ style,” with characters speaking directly to camera.

“WandaVision” briefly employed the same tactic in Episode 6, with Wanda’s son Billy breaking the fourth wall to explain how his mother and father had been “not fighting, but different” since “Pietro” came to town.

Now, it seems Wanda will be working through her magic hangover in a similar way, giving off some definite Claire Dunphy vibes.

The new clip also seems to indicate a glitch in the system. As Billy and Tommy race into Wanda’s room – where Vision is noticeably missing – they tell their mother about how their game is “freaking out.” What starts as modern PlayStation-looking controllers, morphs into Atari joysticks and then into UNO cards.

Could this be indicating an impending collision of timelines? It does seem that Wanda is losing her grip on her powers after expanding the Hex last week, as that was clearly not part of the plan.

The clip also doubles down on the idea that the Westview Anomaly was created by Wanda herself, out of fear and grief, and that she is now openly acknowledging that fact. “We’ve all been there, right?” Wanda poses. “Letting our fear and anger get the best of us. Intentionally expanding the borders of the false world we created.”

That expansion places Darcy in the Hex this week, after staying behind to try and crack Hayward’s last firewall to see what information he’s hiding. At this point, her Hex persona still remains a mystery.

Check out the “WandaVision” clip below: