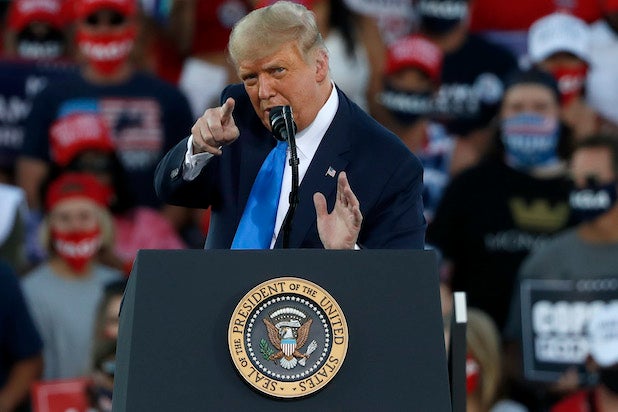 President Donald Trump is by far the target of more late-night TV host’s jokes than his opponent, Joe Biden, according to a new study obtained by the Associated Press.

From Sept. 1-30, 455 of the quips Stephen Colbert and Jimmy Fallon told about the presidential candidates during their opening monologues targeted Trump versus 14 focused on Biden, per the Center for Media and Public Affairs at George Mason University. That means POTUS was the butt of 97% of the “Late Show” and “Tonight Show” hosts’ jokes.

And that’s just counting the witty remarks directly aimed at Trump, not the 64 jokes combined that Colbert and Fallon made about Trump’s family and his administration, according to George Mason’s study.

“Late night TV host monologues have literally become all Trump, all the time,” Robert Lichter, communication professor at George Mason and director of the study, said.

According to the Center for Media and Public Affairs at George Mason University, joke writers tend to focus on Republican candidates more than Democratic candidates, but the extent to which Trump jokes are favored over Biden jokes hasn’t been seen since Lichter began tracking late-night TV’s presidential candidate jokes in 1992.

The only election that comes close is Trump’s 2016 race against Hillary Clinton. Per the study, Trump was the target of 78% of the jokes compared to Clinton at 22%.

Trump and Biden will face off in the second and final presidential debate on Thursday, giving late-night TV hosts more ammo to fire off jokes at whomever they choose. But what happens if Trump loses the Nov. 3 election? Will the comedy writers have to switch their focus to the new POTUS?
“I think they will find a way to keep making jokes about Trump, even after he leaves office,” Lichter said.

And that has happened before. According to Lichter, in 2001, late-night hosts continued to focus on Bill Clinton after George W. Bush was elected.

The long-term findings of the study appear in the new book “Late Night with Trump,” authored by Lichter and Stephen Farnsworth and Robert Lichter.