Matteo Garrone’s new film is a curious beast, one that looks different depending on which side you approach it from. You could take it for a hard-hitting crime drama like Garrone’s 2008 hit Gomarrah, set in the Neapolitan underworld: the loose inspiration in this instance was a real-life case that occurred in Rome in 1988, though the details have, if anything, been toned down.

From another angle, Dogman comes close to a horror tale in the mould of a classic like Edgar Allen Poe’s Hop-Frog. There’s also an element of black farce — and of a kind of traditional, popular burlesque, as if the characters were modelled after puppets or circus clowns. 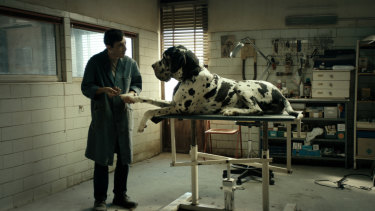 Marcello Fonte as the protagonist in Dogman.

At any rate, talk about your underdog stories. The title has a double meaning: the protagonist Marcello, played by Marcello Fonte, makes his living grooming pedigree dogs, and himself has the cringing manner of a mutt who has just been kicked or who expects to be.

Fonte has not had a lot of attention up till now, despite an early appearance in Martin Scorsese’s Gangs of New York. But he's the kind of character actor who makes an immediate physical impact: a small, scrawny guy with prominent front teeth often displayed in an eager-beaver grin, and dark sunken eyes reminiscent of the horror director Dario Argento in his younger, hungrier days.

His decrepit look is matched by that of the main location, a coastal town in the general vicinity of Naples which Garrone shoots as if it were the end of the earth. Marcello’s shop in particular stands in urgent need of renovation — but he has a steady stream of customers and is generally well-liked as a local character.

In the opening stretch of the film, one dog after another passes through his hands, from a Great Dane to a chihuahua. These scenes show the character at his most endearing, and are played for whimsy even as we suspect that the story will eventually turn nasty.

Indeed, it isn’t long before we learn Marcello has a darker side: with a young daughter (Alida Baldari Calabria) to support, he’s taken to supplementing his income by selling cocaine (or perhaps — it’s not entirely clear — the dog parlour has always been more of a drug-dealing front than anything else).

This brings him into regular contact with some dubious personalities, in particular a hulking former boxer and petty crook named Simone (Edoardo Pesce) who is, supposedly, his best mate.

The pair form an odd couple of the most dysfunctional kind, Simone demanding free drugs or other favours while Marcello plays along partly from intimidation and partly from a genuine desire to maintain the friendship.

This is where the knockabout, puppet show side of the film comes in, in a manner which is menacing and comic at once. The idea that Italian culture is especially physically demonstrative is a cliche, but Garrone certainly favours performances that are energetically gestural, letting us see how things stand between two characters at a glance.

Simone has a way of occupying all the available space, getting up close to Marcello in a pantomime of friendliness which is also a transparent threat. Marcello on his side is propelled into frenzies of ingratiation that contrast with his gentleness with the dogs — and with the moments when he goes wilfully numb and unresponsive, as when he’s questioned by the authorities late in the piece.

Dogman can be unpleasant to watch, as films about bullying commonly are. But on its own terms it’s well-made and even gripping. That said, it’s not altogether clear why Garrone chose to tell this story or what broader implications (if any) he has in mind.

As a character study, the film has an admirable toughness: Marcello is a sympathetic “little guy” who is finally not all that sympathetic, and whose deference towards Simone accurately reflects how such power dynamics often operate in life. Still, when you get to the end, you may find yourself wondering “Is that it?”

Many viewers will be thankful at least for one mercy, which I’m prepared to divulge even at the risk of spoilers. There’s a fair degree of brutality in this movie — but despite a few concerning moments, the worst of it isn’t visited on the dogs.