The timing couldn’t be better for Disney Animation’s new musical dance short, “Us Again” (streaming Friday on Disney+ after screening theatrically in front of “Raya and the Last Dragon”). It’s about a biracial senior couple, Art and Dot, who become young again and dance the night away in the rain. It’s the perfect liberation from the pandemic and anticipates a trio of Lin-Manuel Miranda movie musicals coming this year (“In the Heights,” as well as the animated “Vivo” from Sony/Netflix, and “Encanto” from Disney) along with Steven Spielberg’s remake of “West Side Story.”

But, for director Zach Parrish (head of animation on the Oscar-winning “Big Hero 6” and director of the experimental Short Circuit film, “Puddles”), “Us Again” grew out of a youthful yearning. “I thought of the pains of aging in my 30s and longing for his younger body,” he said. “I spoke to my mom, and she told me she’s still waiting to grow up in her 60s.” Then he recalled how his grandparents had two very different approaches to aging — his grandfather was a homebody while his grandmother toured the country and liked to hike.

“That felt like a really good premise, that youth is a state of mind and if you spend all your time on the past, you’re going to miss the present,” added Parrish. That sparked a seven-minute short with grumpy Art and young-at-heart Dot discovering a fountain of youth in rainy New York City and joining the carnival atmosphere. That is, until the rain starts moving toward the pier and the couple become seniors again. “A big dance number spiraled into a complete short devoted to dance, with a funk and soul score inspired by the ’60s [composed by Pinar Toprak]. If the whole world was dancing, then we could isolate Art and his feeling of not fitting into this world anymore.” 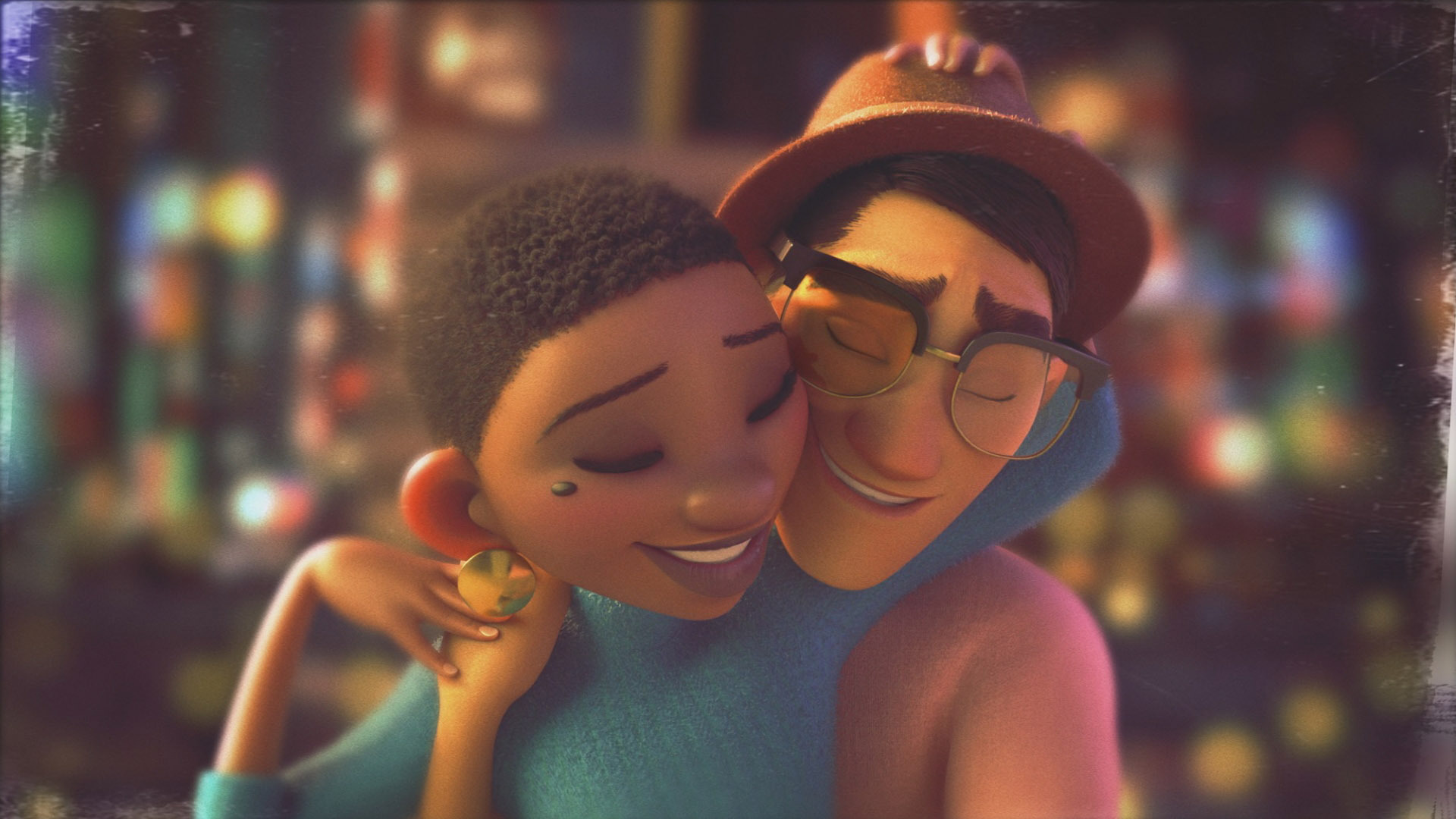 Produced by Brad Simonsen (associate producer on “Big Hero 6” and the Oscar-winning “Zootopia”) and executive-produced by Jennifer Lee, Disney Animation’s chief creative officer, “Us Again” marks the first theatrical short since “Inner Workings” opened in front of “Moana” in 20016. Award-winning dancer-choreographers Keone and Mari Madrid (who’ve worked with Billie Eilish and Justin Bieber) served as reference choreographers. Disney first shot video reference of their choreography, turned that into an animatic, which became the basis of the animation. The animation was keyframed, the rain was simulated in Houdini, and the crowd team populated the cityscape with background dancing characters and cars.

“Zach and Brad were very willing to bend the process to accommodate our needs in getting the music much earlier,” said Keone. “Because we’re very specific with the music and the sound and the emotion for the time stamps. Once it was nailed down, we had our menu of movements from big, athletic, gravity-bending to small, communicative, and gestural to couple-y romantic to individual. So it was all thrown in there, and it was just a matter of who gets what movements and having a heart to it all.” 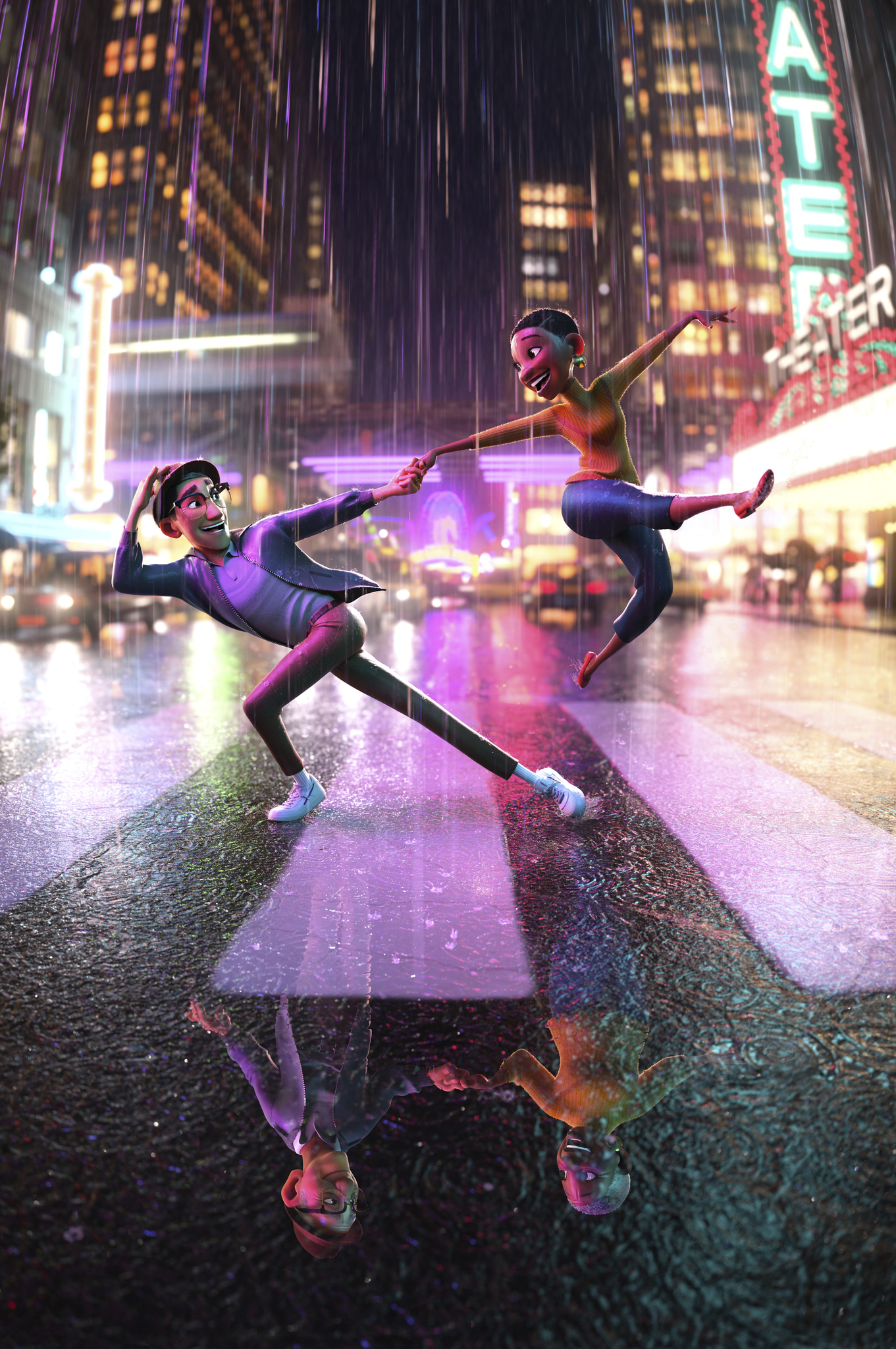 In terms of the color palette, Disney contrasted the desaturated look of Art and Dot’s claustrophobic apartment with the eye-popping look of the New York dancing world outside. “When it got dark and started raining, we emphasized the neon lights with the a ’60s feeling,” Parrish said. “And then we got really vibrant with reflections off the water. And we started incorporating a lot more turquoise to make it feel a little off. Then we sucked the colors out as we got toward the end of the pier and away from the carnival. We used the changing light of the Ferris Wheel for that moment on the bench when Art learns his lesson, and start to bring more saturation in.”

Besides “Fantasia,” of course, the greatest influence was Damien Chazelle’s “La La Land,” primarily because it served as a compendium of musical references to study. “Also I love the choreography of the camera in that film [shot by Oscar winner Linus Sandgren] because it really feels like a third dance,” added Parrish. “There was a desire to have a little bit of that feeling in our camera work as well.”

And what does Parrish think about any thematic parallels to emerge from the pandemic? “I guess we got lucky with our timing,” he said. “After a year and a half of sitting in our houses, it definitely resonates, this idea of getting out and living life and being appreciative of the life that you have.”