In a tense exchange, Vanessa Feltz questioned royal biographer Angela Levin on her comments about Meghan Markle, asking whether she feels ‘responsible’ for fuelling criticism of the Duchess of Sussex.

And, dear reader, this did not remain a calm conversation.

Vanessa was discussing the reunion of Princes William and Harry alongside their wives, Kate and Meghan, following the death of the Queen at Balmoral aged 96 last week, when talk turned to Angela’s past remarks on Meghan.

The author, who has written biographies about Prince Harry as well as new Queen Consort Camilla, has in the past accused Meghan of having an attitude of ‘taking everything for granted and not giving back’.

After suggesting Meghan ‘wasn’t fit’ to be a part of the Royal Family, Vanessa asked her on TalkTV on Monday evening whether Angela felt she’d ‘been very harsh, one woman to another.’

Angela insisted Meghan ‘doesn’t want to behave as if she’s the wife of the sixth in line to the throne, she likes to lead, she likes it to be all about her’, adding: ‘She just hated it, she hated to be told what to do, she hated the protocols.’ 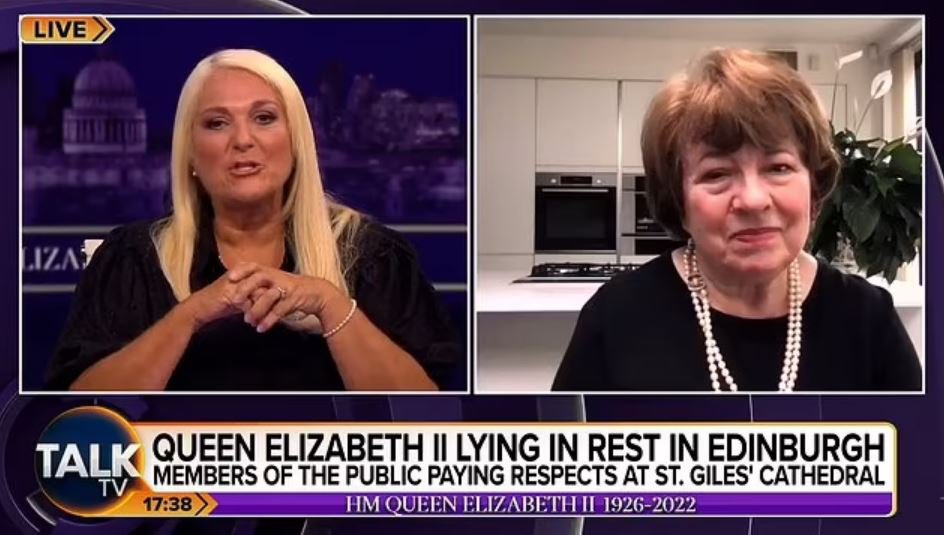 Noting guest Emily Andrews had visibly reacted to Angela’s comments, the panellist suggesting Meghan instead appeared ‘nervous’ during the walkabout with the Prince and Princess of Wales, Vanessa pressed Angela on whether she ‘felt any guilt’ for her criticism.

She asked: ‘Do you feel you have been responsible for fuelling a kind of anti-Meghan faction that has been spiteful and targeting and possible fanciful as well? Quite a lot of what’s been said about her has been manufactured anyway.’

Noting it was ‘up to you what you think of me’, Angela went on: ‘I think the talking to Oprah Winfrey was a disgrace, there were at least 17 lies there.

‘I think she’s attacked the royals completely unnecessarily. I think she’s changed Harry to be a sort of walking victim.’

At this, Vanessa interrupted Angela: ‘Hang on, that means you consider him to be a sap, someone so malleable. He’s served very bravely in mortal combat, he’s not the kind of guy who can be pushed around, is he?’

The heat on the exchange was turned up a few notches, with Angela responding: ‘I don’t have to justify myself to you. I’m not in court. This is my view, this is what I’ve said. People ask me questions and I answer them honestly to what I’ve said.

‘I’ve followed them very closely, I’ve spent 15 months with Prince Harry. The Prince Harry I knew was absolutely charming, instinctive like his mother, full of fun, and now he looks, when he’s out, incredibly unhappy and very tense and resentful.’

However, wondering how anyone would be able to know the personal ins and outs of the couple, Vanessa mused: ‘I wonder if you’re just rehashing that biblical story that we’ve heard so many times before of the evil temptress and the trusting and vulnerable man who is gullible and malleable in her hands.

‘I wonder whether you know if it’s based on any real knowledge of her personality and what she truly feels and thinks.

‘After all, how can you know? How can any of us really know?’

You may think that would be the end of the segment, with other panellists looking uncomfortable, however, Angela insisted it was her ‘view’ she was sharing, while Vanessa continued to ask what she bases said views on.

She wondered whether the biographer ‘just imagined it, whether you’re projecting, whether you really know, whether it’s facts, whether it’s conjecture,’ asking: ‘You say what you think but what are the thoughts based on?’

Evidently finding umbrage with the line of questioning, Angela suggested: ‘If you want to attack me you shouldn’t invite me on.

‘You’ve got an agenda there to attack me.’

The TalkTV host denied she had an ‘agenda’, and as the two women proceeded to speak over one another Angela said: ‘I don’t think I want to be invited on this programme and treated in this manner.’

It’s fair to say the response online was divided, with many praising Vanessa for the ‘brilliant’ line of questioning, but others believing Angela was ‘treated quite appallingly’.

The pair were just the latest to dissect the royals’ appearance on the weekend, with Oprah hoping the outing was the first step in bringing the family back together, while Piers Morgan found it an ‘encouraging’ move and Lorraine hailing Meghan an ‘absolute delight’.