The third leg of Chris Tarrant's four-part journey sees him in the Ukraine, "a country of extremes". He's taking a seven-day, 1000-mile trip from the EU border in the west to the Black Sea, with stretches of his travel finding him on Soviet-era rattlers that fail to impress him. He learns about dark chapters of the country's history: the Nazi occupation and the decimation of the Jewish population; Holodomor, the devastating famine orchestrated by Stalin's government; the terrifying leak from the nuclear reactor at Chernobyl. On the upside, there's the tree tunnel of love in Rivne. But the overall impression is of a nation rich in grain but buffeted by turmoil and tragedy. 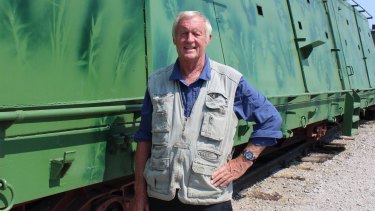 Chris Tarrant embarks on an epic trip in Railway Journeys.