Borodyanka: The ground crunches when the Kulikovskys walk across the broken glass and shattered bricks that cover the car park outside their home in Borodyanka, on the western approaches to Kyiv, four months after Russian air strikes killed their neighbours.

Volodymyr, Irina and their daughter Anastasia have just collected the last possessions from their home on the third floor of an apartment building that is now a ruin of blackened walls, collapsed ceilings and a river of rubble that spills onto the pavement. 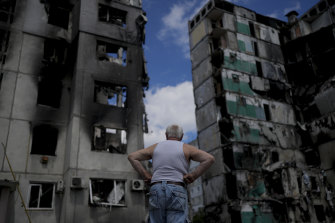 A man looks at buildings destroyed during Russian attacks on Borodyanka on the outskirts of Kyiv.Credit:AP

“The Russians took all the expensive things,” says Irina.

“But we’ve tried to take what is left because it’s such a difficult time and it’s hard to earn money.

“We worked here all our lives, we bought this flat and we had plans for the future. Then the Russians came.”

A dozen apartment blocks were destroyed along the main street of Borodyanka when Russian tanks came down the highway at the end of February. The town was occupied for a month as was nearby Bucha which is closer to Kyiv on the same road. 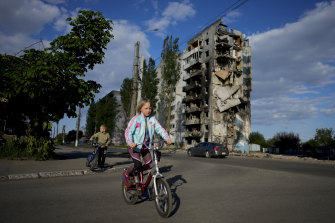 A girl rides a bicycle in front of houses ruined by shelling in Borodyanka.Credit:AP

The killing of civilians on the streets of Bucha made headlines, but the brutality of the air strikes in Borodyanka is more visible. Perhaps because of its small airport nearby, it was singled out for constant shelling.

Volodymyr Kulikovsky’s godfather was one of the estimated 60 killed in the first stage of the invasion, but nobody is certain about how many died because many of the town’s 13,000 residents have still not been found.

The family fled when the invasion began and found relative safety in nearby Andriivka, which lies to the south on a minor road, but others were trapped. 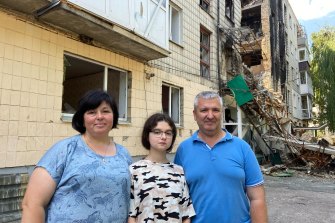 The Kulikovsky family: Irina, Anastasia and Volodymyr have returned to Borodyanka.Credit:David Crowe

“In the forest, we had corpses, people killed by Russian soldiers.”

Denis Stasenko, a young man of fighting age, was walking his dog when he passed Russian soldiers on the edge of town. He walked on thinking he would be shot in the back. Two of his friends were tortured because they had nationalist tattoos on their arms. Another was stripped naked and left in the countryside to walk 17 kilometres back to town in the freezing cold of early March. When the Russians stormed into homes, men with weapons or military clothing were shot dead.

Stasenko was trapped in Borodyanka during the occupation from March 2 to April 4 but he had no nationalist tattoos. “That saved my life,” he says through an interpreter.

Children jump on trampolines in the park across the road from the row of wrecked apartments. An international charity, World Central Kitchen, is feeding local families. But there is no reconstruction and families are frustrated. “Remove the rubble – build our flats,” says one sign in English.

In Irpin, another town that was occupied on the road to Kyiv, money raised by the Australian Federation of Ukrainian Organisations has gone to a project supported by the Rotary Club of Kyiv to house up to 500 people at a cost of about $700,000. 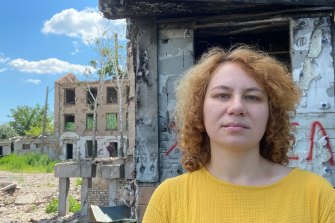 Kateryna Butko, a board member of Auto Maidan, a non-government organisation that gathers testimony about war crimes, believes the residents of these towns – and others across Ukraine – need more support. The Red Cross, she says, does not seem to do anything and even Doctors Without Borders is barely visible.

The need for help is far greater than the aid being delivered along these streets. Dozens of families are living in “Iron City” near the centre of town, where railway carriages have been turned into dormitories. One way forward may be for countries to “adopt” each town to support the reconstruction.

“These people need to live somewhere,” says Butko. “But, of course, these programs need to start after the war because nobody is going to rebuild if the Russians can come back and destroy again.” 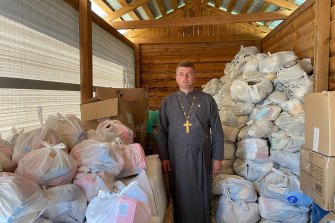 Father Dmytro with food and other basic supplies in the storeroom next to his church in Borodyanko.Credit:David Crowe

Auto Maiden is part of a collective effort that has recorded 12,941 episodes of war crimes across Ukraine including direct testimony of random killings, such as the deaths of three teenage boys shot as they walked down a road. Butko says people have been willing to speak even when they worry about the Russians returning.

At the Ukrainian Orthodox church, next to the only remaining school in Borodyanka, Father Dmytro has set up a foundation to raise cash to buy household essentials.

What do people need most? “Food,” he says at the church storeroom on Saturday morning after christening a 40-day-old boy. Even shampoo, he adds, is useful for families who have so little. And he wants to repair the church after it was shot up by Russians.

Ukraine is a nation of separated families: fathers who are working in the east or fighting on the front line, mothers with children in the west, grandparents who have taken grandchildren to safety in Poland or beyond.

The Kulikovsky family has chosen to remain in Borodyanka. Volodymyr and Irina have found a place to stay with friends and Anastasia will return to school after the summer holidays. Four months after the occupation, they speak in an almost matter-of-fact way about their fate. Anastasia flashes a brief smile when they agree to be photographed.

Irina’s eyes change, however, when she is told that people as far away as Australia are aware of what Ukraine is suffering. That is when she wipes away a tear.