Artist Colin Sheppard lived with drag queen Renee Scott in St Kilda for one colourful year in 1987, and recalls regularly waking up in the early hours to find the flat full of merry drag artists.

Scott, a one-time Les Girls revue performer, was famous for the aviary – with macaws and parrots – she kept in front of her Victoria Street home near the Esplanade Hotel. 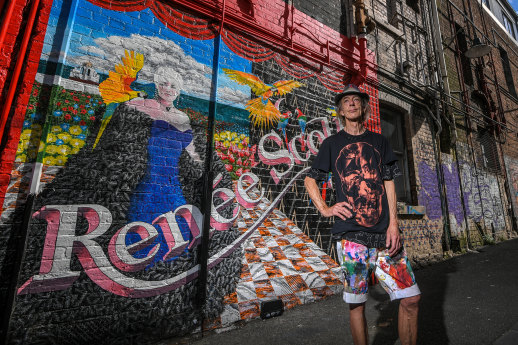 Sheppard said that by day, Scott would stroll down Fitzroy Street in high heels and a gown, walking two long-legged Afghan hounds. She was “a beautiful person”, not shy to say what she was thinking.

He says Scott, who died in 2012, would have loved the mural of her he painted on the wall of a backpacker hostel on the corner of Little Grey and Grey streets last winter.

It got rave reviews from local Facebook pages and some posts suggested Sheppard paint the whole lane.

And so he dreamt up the St Kilda Walk of Art.

Over the next five years, he wants to paint 50 murals of St Kilda “legends” along an entire lane – Little Grey Street, which runs from Grey to Princes streets.

Sheppard says the St Kilda Walk of Art could rival Hosier Lane in Melbourne’s CBD as a tourist attraction, and help revitalise the seaside suburb.

“It will attract more people here,” he said. “We all know that art is one of the greatest attractions for a crowd.”

Sheppard envisions the murals being “seen on aeroplane screens” as travellers fly into Melbourne.

The lane was in a perfect location, 20 metres from the St Kilda light rail terminal to the city, he said. 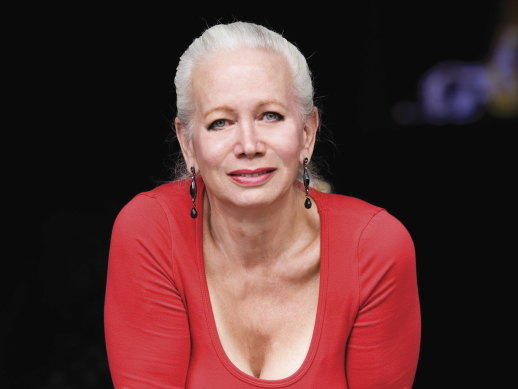 Those selected for depiction would be “people who created whatever they did here, and changed the way things were”.

There is no shortage of subjects, from artist and restaurateur Mirka Mora to soul singer Renee Geyer and cartoonist and punk musican Fred Negro.

Sheppard’s next mural would be of businessman Alfred Felton, who lived in the Esplanade Hotel for 12 years until he died in 1904 and who donated half his fortune – and many artworks – to the National Gallery of Victoria, and the other half to women’s and children’s charities.

Sheppard’s just-finished second Little Grey Street mural depicts Nick Cave and the Birthday Party, the post-punk band that played in the Crystal Ballroom in the late 1970s and early 1980s. 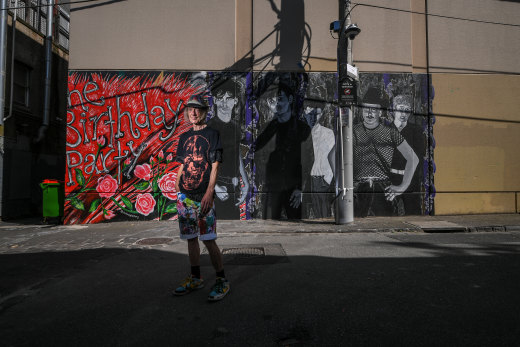 Sheppard with the Nick Cave and the Birthday Party mural.Credit:Justin McManus

The City of Port Phillip funded both of Sheppard’s Little Grey Street murals, for $10,000 and $12,000, but the council says grants and approval for future murals must be applied for separately.

In a statement for City of Port Phillip, Deputy Mayor Andrew Bond said: “While we are interested in Mr Sheppard’s concept for Little Grey Street, we have not committed to funding further murals.

“We encourage him to apply for future rounds of council grants, or more widely, if he wishes to continue his mural art in this location. All applications to us are assessed in a competitive process against criteria. There is no set amount awarded to successful grant applicants.

“This depends on factors including the concept and available funding pool.”

Asked his personal view, Bond said: “Generally speaking, I think it would be a very good outcome for the area. It’s an area that has had a bit of antisocial behaviour previously and anything that helps that area is a good outcome. It has the potential to attract people to view laneway art in St Kilda the way they do in the city at present.

“We’re willing to look at it, and it would need to go through the correct and proper processes.”

Port Phillip Mayor Heather Cunsolo said the council was open to the idea of the murals: “We really enjoy street art, so a project like that would be interesting, with Hosier Lane as an example, from a tourism point of view. But this project hasn’t been brought to us in full, it’s not funded, it would have to go through all the grant processes.”