Sir William Heseltine, the Queen’s long-serving Australian private secretary, last saw his old boss in 2019. They had lunch, compared walking sticks, and stood side-by-side to see how much the other had shrunk. “I had shrunk visibly; she said she had shrunk, too,” he recalls.

For the best part of 30 years, there were few commoners as close to her majesty. Heseltine knew her habits – a martini before dinner, the Telegraph crossword, the races on TV – and witnessed some of her most distressing moments, such as when an anti-royalist shot at her with blanks during the 1981 Trooping the Colour. 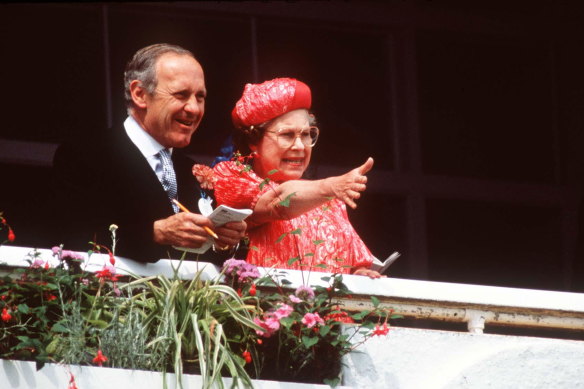 The Queen at a horse race with her Australian private secretary, William Heseltine.Credit:Tim Graham/Getty Images

“She was remarkably unflustered,” he told the Herald and The Age.

From his home in Perth on Friday, Heseltine, now in his 90s, joined many Australians who knew the Queen in recalling the woman behind the crown: a horse-lover with a cheeky sense of humour and a gentle ability to put others at ease, who was, as one described her, the “most normal non-normal person I have ever met”. 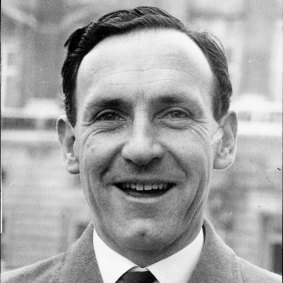 William Heseltine at age 37, when he became press secretary to the Queen. He later became her private secretary. Credit:Fairfax Media

The Queen was surrounded by pomp and pageantry but Elizabeth’s pleasures were simple. She watched British dramas on television. She dropped everything to watch one of her horses race. She took walks in the country with her ever-present corgis, which were often the only witnesses to prime ministerial meetings and which lurked for scraps beneath state dinner tables.

She had a wry sense of humour. “She was mischievous,” said Racing NSW boss Peter V’landys, who sat next to her at lunch a few months ago, corgis at their feet, and was charmed by her banter. “I gave a few barbs and she gave as good as she got. You could tell she was enjoying it because she had a little grin on her face.”

In the right mood, she was also “an excellent mimic”, Heseltine said. She imitated everyone from former Russian president Boris Yeltsin to the chambermaid with a Middlesbrough twang who discovered intruder Michael Fagan in the royal bedchamber in 1982. “Ooh, bloody ’ell Ma’am, what’s ‘e doin’ ’ere?”

Heseltine saw little difference between the private Queen and the public one. “She was one of the most authentic people I’ve ever come across,” he said. “She made no attempt to protect herself. Like [many from] the wartime generation, she didn’t show her heart on her sleeve.

“They’d been through the horrors of the blitz. It wasn’t easy for her to show a lot of emotion. On occasion she did, like when she visited the coal mining village [of Aberfan, where children were killed in a massive colliery spoil tip]. It was one of the few occasions she wept in public.”

Heseltine found her an “exemplary” boss; conscientious, steady and hardworking. The papers of state, delivered in the red dispatch box, were always read and returned on time.

“It was a dutiful performance of work which sometimes had to be very boring,” he said. “She managed it with good humour and extraordinary punctuality.”

Even during that last trip to London, she seemed indefatigable. A service for the Royal Victorian Order – an honour given to those who served her personally – dragged on for hours. Heseltine, then in his late 80s, said he “felt like doing nothing but sitting down exhausted”.

But the Queen, in her early 90s, “spoke to people for an hour and a half, a feat I was lost in admiration for”.

Australian-born Samantha Cohen served the Queen for 17 years, until 2019. She has described the late monarch as remarkably grounded. 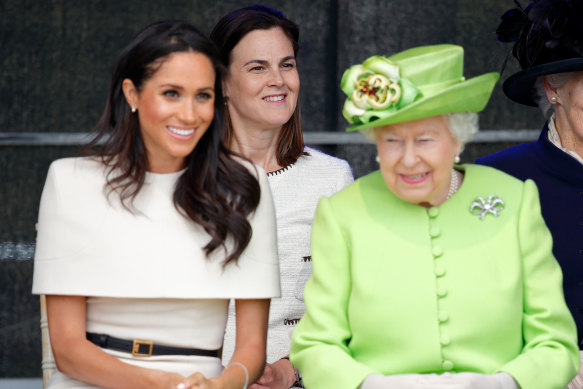 Meghan, Duchess of Sussex, and the Queen with Australian Samantha Cohen behind them.Credit:Getty Images

“She wasn’t fussy, she was so practical, she wasn’t interested in material things. And she was incredibly humble, she was without ego. Quite shy, really.”

Horse racing was the royal passion. She read the Racing Post over breakfast, reaching for it before the Telegraph and the Financial Times.

She was an admirer of Chris Waller, trainer of Australian thoroughbred Winx, and chatted with him on the phone. She discussed the super horse in her audience with then-prime minister Scott Morrison.

“We joked that Winx could have written an autobiography; [he] was that good,” Morrison said on Friday (she also asked him about the NSW mouse plague). 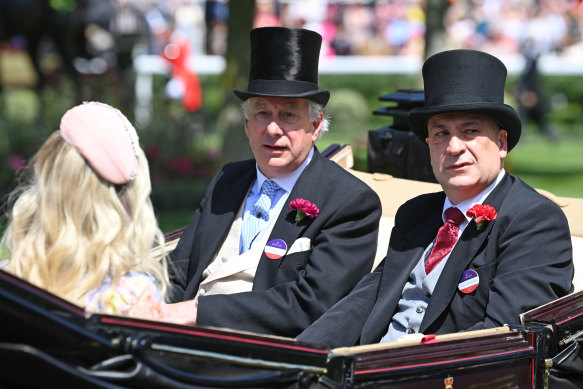 Her passion for horses led to V’landys’ audience earlier this year, when he watched, spellbound, as a noisy room full of her relatives grew quiet when she arrived in the doorway. “It was like an angel had walked into the room,” he said. “It was like a spotlight was on her.”

Over lunch, she told him the origins of her passion. Her father, George VI, who owned horses but had no great love of them, took her to the races to keep him company.

“She said, ‘I saw this beautiful horse, I went up to him and patted his neck, and I couldn’t let it go – it felt like velvet. I didn’t want to leave.’ ” One of her courtiers told V’landys that she liked nothing better than to “sit on the lounge, watch a few races, and have some nibbles”.

She was fascinated by his background as a Greek immigrant to Australia. “She was more interested in learning about me.” V’landys wondered if his story reminded her of her late husband Philip, who was also a Greek immigrant with an irreverent sense of humour.

Ian Sinclair, a former MP and one of the handful of Australian privy counsellors, said her knowledge of Australia was encyclopaedic.

“We had a great conversation with both [the Queen and Prince Philip] on one occasion about migratory birds, and how they fly so far across the Pacific and always come to the same place to breed,” he said.

Prime ministers and governors-general recalled her gentle solicitude. Even heads of state got nervous meeting the Queen, but she was an “absolute, unparalleled expert at putting people at their ease”, former prime minister Malcolm Turnbull said. “She had a charm and calm, and the calm was as important as the charm.”

Ana Retallack, who runs an etiquette training business in Geelong, worked for the Lord Chamberlain’s office in the 1990s, during which she helped organise royal funerals, including Princess Diana’s, weddings, including Prince Edward’s, and garden parties.

One of her jobs was to stand with people preparing to receive an honour from the Queen. They were often nervous. “I’d reassure them, ‘She’s a wonderful person, you’ll be fine – she’ll make you feel so relaxed and calm in all of 15 or 20 seconds’,” she said. “She had great empathy.”

The Queen was also constantly working. She’d inspect tables for state dinners, noting anything unusual or out of place.

“The red box comes and that has to be dealt with every single day, no matter how tired [she] might feel, or unwell, or whatever,” Retallack said. “It’s such an example to us all.”

Dame Quentin Bryce made history when, as the first female governor-general, she greeted the female monarch alongside a female Australian prime minister, Julia Gillard, in 2011. 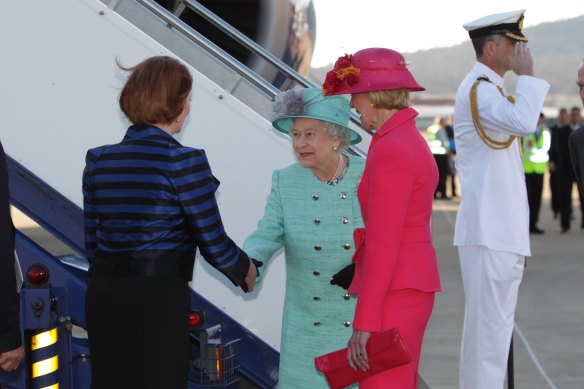 She watched the Queen’s life unfold, on a similar timeline to hers, through marriage, babies and working motherhood, in the pages of women’s magazines.

At the Diamond Jubilee Mass, “I was sitting not far from her, watching her, really, in that splendid cathedral, and seeing her equanimity and calm and thinking about her deep faith,” she said.

“The way she’s certainly fulfilled that promise she made when she was 21 about dedicating her life to service of her people. It must have been at a cost, quite a few times, across her life. When people talk about her as unknowable, I think that’s a great strength in a monarch; that selfless restraint.”

Receive a wrap of our coverage as the world mourns Queen Elizabeth II in our Morning Edition newsletter. Sign up here.