Torture, abuse, and death everywhere: As thousands of Afghans abandoned by the west flee the Taliban, a refugee who escaped their rule in the 1990s gives a glimpse of the horror journey awaiting them

A former refugee who fled Taliban rule in the 1990s has shed light on the horror journey now facing thousands of Afghans who were abandoned during the west’s chaotic evacuation of the country.

Rohullah Yakobi, who goes by Roh, left Afghanistan in 1999 after the Taliban conquered the region where he lived and where his father had been the commander of a militia fighting the Islamists.

Captured and tortured by jihadist fighters aged just 12, Roh was sent out of the country by relatives fearing for his safety. What followed was a five-year ordeal that saw him witness horrifying abuse, attempt suicide on more than one occasion, and live in constant fear of being deported back to certain death in his home country.

Now living in the UK where he is an associate fellow at the Human Security Centre think-tank and an activist, he told MailOnline: ‘The dark reality of becoming a refugee is that… you may survive as a living person, but you will be wounded both psychotically and physically with scars that last for life.’ 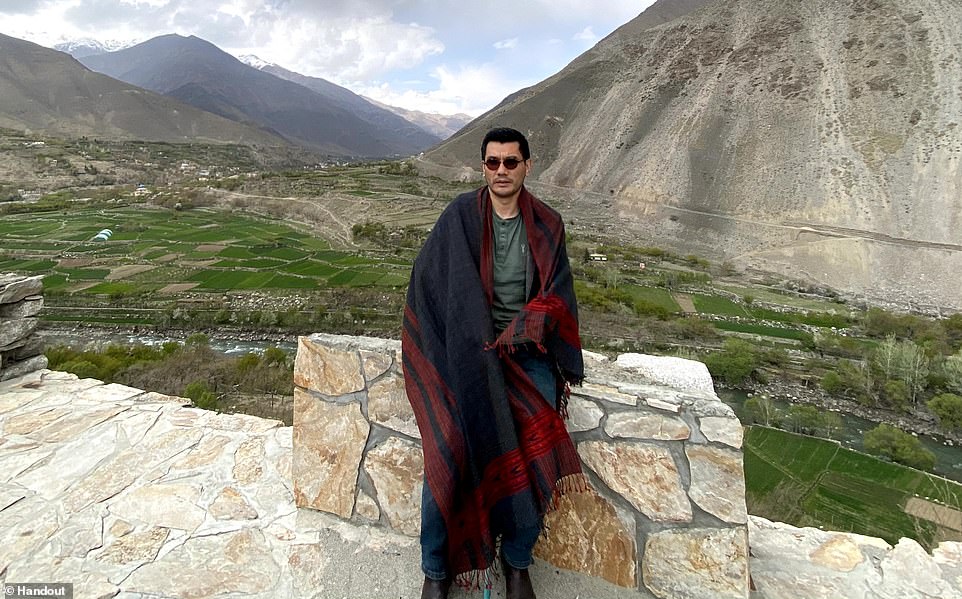 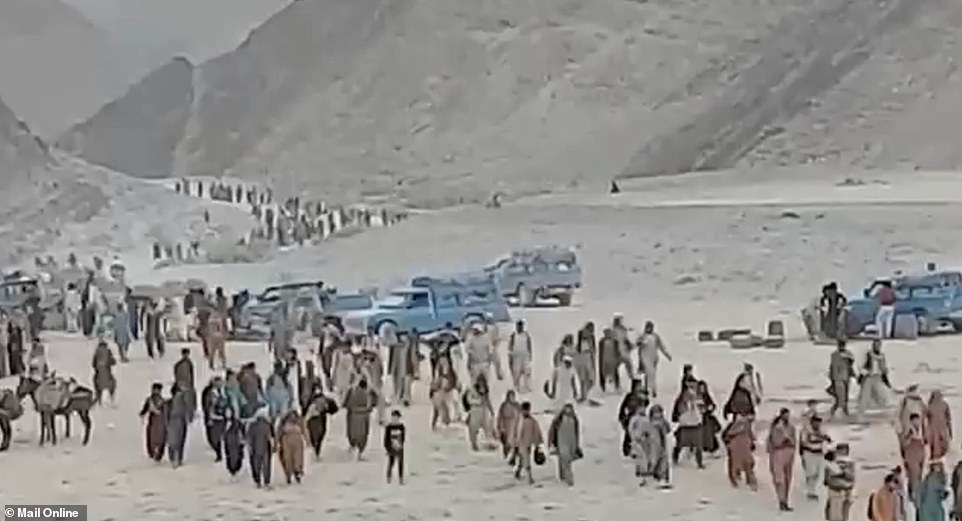 He spoke about his experience fleeing Afghanistan as thousands of people flee Taliban rule once again (pictured), opening up about out a five-year ordeal which saw him witness horrifying abuse and try to kill himself more than once

Roh was born 1987 in the village of Anguri, in the central Hazarajat region of Afghanistan – home of the Hazara ethnic minority who were targeted by jihadists because they are Shia Muslims, rather than Sunni.

Jihadist fighters, armed and trained by the CIA to fight the Soviets, then began capturing territory in Afghanistan after Russian forces withdrew and, in 1995, formed the Taliban.

Fearing persecution and death at their hands, Roh’s father – Riza – took up arms and fought against them during a two-year blockade of Hazarajat that ended with defeat in 1998, he told Tortoise Media in a separate interview.

After negotiating a surrender to the Taliban, Riza was forced to flee the country – but that did not stop the Islamists from looking for him, torturing anyone close to the family who they thought might give them information.

Roh told of the night in 1999 when the Taliban kidnapped him and took him to a torture chamber they had set up in one of his father’s old bases where an uncle was being kept.

He spent the night listening as they tortured the older man, who returned to the cell in the early hours with blood soaking his head.

Then, it was his turn. Taken to see a Taliban commander as he heated tea in a pot, Roh was questioned about his father’s whereabouts. When he couldn’t provide any information, he had a burning teaspoon repeatedly held against his skin.

After being allowed to return to his village, Roh’s family decided he needed to leave the country immediately. They put him on the back of a motorbike which sped out of the village – and he has never been back since.

From there he was taken south to Kandahar, the capital of Taliban territory, in the hopes of getting across the border into Pakistan where there is a large Hazara community, he told MailOnline.

In the city of Kandahar, Roh said that he and a cousin were beaten in a public square after people realised they were Hazaras and were denied rooms at hotels before eventually settling for the night in a scrapyard.

‘We find a scrapyard, it was dark, very hot, above 40C (105F), full of mosquitos and stray dogs. Unbeknownst to us we slept with Taliban guards just a few hundred meters away,’ he told MailOnline.

It would not be his only close brush with jihadists. From the scrapyard, he managed to get to Helmand – to an opium farm run by a relative who agreed to give them shelter before taking them to the Pakistan border.

In order to pay his way, Roh was given 1,000 rupees and 1kg of opium. While sitting in the back of a car on the way to the border crossing at Spin Boldak, they were passed by a convoy which he believes was carrying Al Qaeda leader Osama bin Laden.

‘Did I really pass ways with Bin Laden holding a bag of opium in the back of the car,’ he remembers thinking.

From there, he crossed the border into Pakistan before heading to Iran – the most popular route for refugees because trails running directly into Iran are dangerous and difficult, particularly for children.

He was then taken to Tehran, arriving in December 1999. He ended up stranded there for two years, working as a child labourer to survive.

Roh said it was never his plan to come to Europe. His initial thought was only to make it safely away from the Taliban by heading into Pakistan. From there, he headed to Iran because that was safer still and the locals spoke Persian, which is similar to the Hazara language.

But, in 2000, the Iranian regime began rounding up and deporting Afghans back to the Taliban – where Hazaras were typically separated out and massacred. 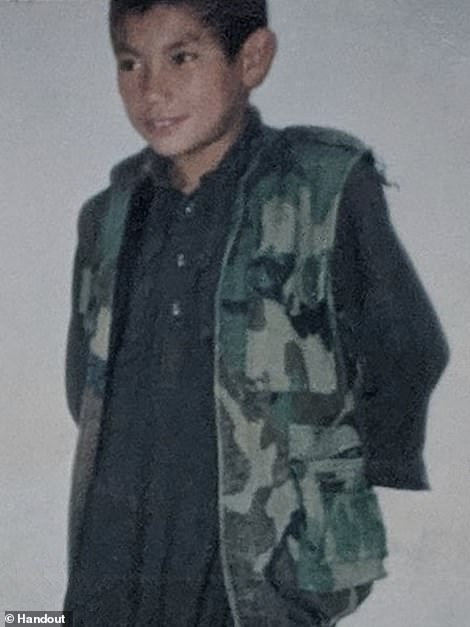 As a 12-year-old boy (pictured aged around 11) Roh was tortured by the Taliban because his father had fought against them, before his family decided to get him out of the country

As the son of a prominent commander, Roh feared that deportation would mean certain death. It was only then that his thoughts turned to Europe, where he hoped he would finally be safe.

But smugglers were demanding $1,500 to pay for the voyage, and Roh had no way of paying.

‘Other children, their families would sell a piece of land in Afghanistan to raise the money, or they would borrow money by promising the smugglers land in return. But I had no land, no ability to borrow money,’ he said.

His wages were enough to subsist on, but could pay for little else. Impoverished, unprotected by any adult, and fearing being reported to authorities for deportation, Roh said abuse of refugee children was common.

While he did not go into specifics about his own ordeal, he said children were frequently physically and sexually abused by a variety of predators. During this time he fell into a deep depression, began self harming, and tried to kill himself more than once.

‘Sometimes you wake up cold in the night and just have a thought that you will harm yourself,’ he said. ‘Other times it is more serious.

‘Suicide was a really common occurrence. When you are a child, you are more vulnerable than an adult, you get abused, you get taken advantage of in any way possible. It is a brutal world, a world that you don’t know, a world where you can be taken advantage of.’

Even for those lucky enough to have the money to pay the smugglers, safety was far from guaranteed. Roh said one boy from his home village was send funds for the passage by his family and was taken by smugglers into Turkey, where he boarded a boat for Greece.

But the boat sank. Roh’s friend disappeared into the ocean, and his body has never been found.

‘I was always under threat,’ he said. ‘While you’re in the midst of it you don’t realise, it’s only when you get somewhere safer that it hits you.’

Fortunately for Roh, salvation came in the form of a phone call from his father, who he connected with through a middle man in Iran. Until then, he knew nothing of his father’s fate and had no idea whether he was alive or dead.

It turned out that he was actually living in Manchester, having been granted political asylum in the UK.

His father told Roh that the rest of his family was living in Pakistan and that he should go there and meet up with them, so that they could all apply to join him. In 2004, their request was granted and the family flew to Manchester where they were reunited. 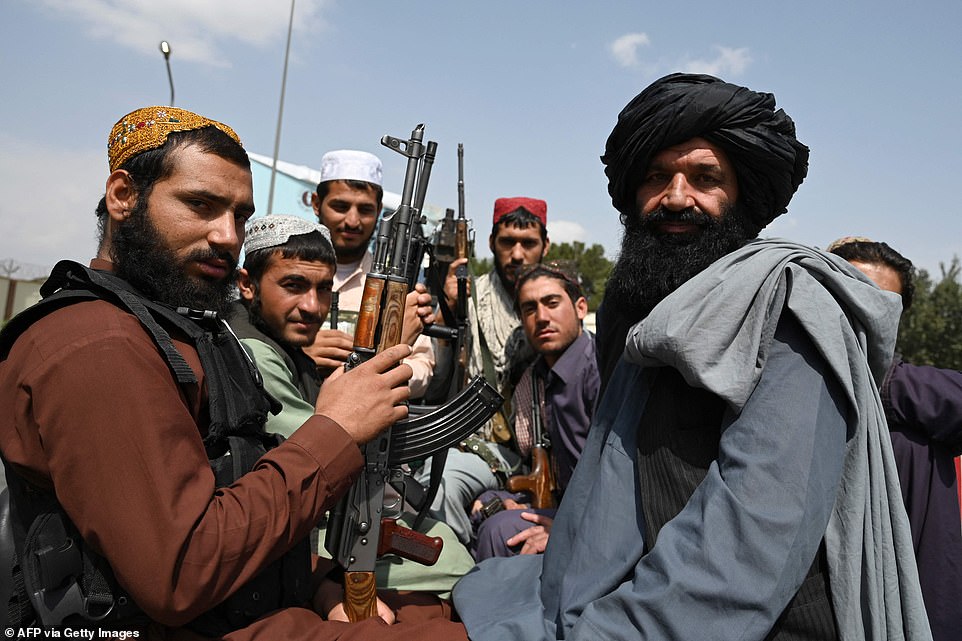 The Taliban has pledged a general amnesty and said there will be no reprisal attacks against those who worked with western forces, but already multiple reports have emerged of summary executions and torture 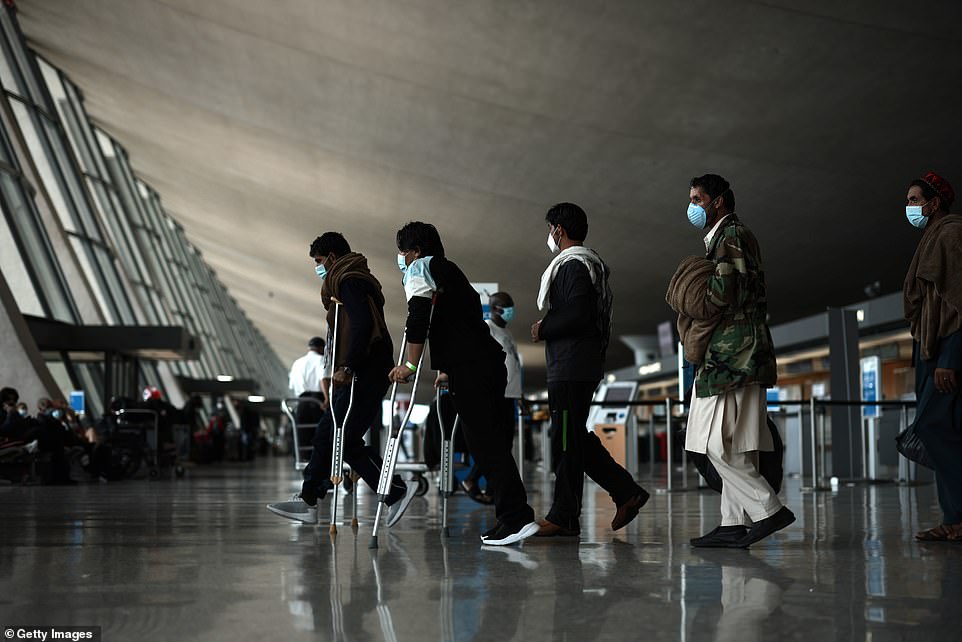 While western forces managed to evacuate more than 100,000 Afghans (pictured arriving at Washington Dulles airport), tens of thousands more were left behind – and now face an arduous journey to reach the west

But, had it not been for that chance phone call, Roh says he would be dead.

‘The threat was always that we would been returned to Afghanistan. It was likely I would have been taken back to be killed. But,’ he said, ‘had the ordeal carried on for much longer [death] would have been self-inflicted.’

Some 600,000 Afghans have been displaced by fighting in Afghanistan since the start of the year, which has seen the Taliban rapidly retake the country from government forces – with the Islamists now holding more territory than they did in the 1990s and armed with American weapons seized from the Afghan army.

Hundreds of those refugees are thought to be western civilians, while tens of thousands more are Afghans who were promised sanctuary in return for helping US, UK and NATO forces – but who got left behind amid a chaotic withdrawal that saw 13 American troops killed.

Footage taken in recent days near Nimroz, in southern Afghanistan, shows thousands of people already streaming across the desert towards the Pakistan border in the hopes of reaching Iran.

The vast majority of Afghan refugees end up settling in one of those two countries, but significant numbers are expected to cross into Turkey and – from there – try to get into Europe, sparking fears of a second refugee crisis.

Among them will almost certainly be those the west promised to help, but ultimately betrayed and left behind under Taliban rule.

‘Those who have been working with British forces… the question of whether we should be letting them in shouldn’t really be asked,’ Roh said. ‘They risked their lives for it.

‘What I really want people to understand is that people don’t become refugees because they want to. The best place for anyone is their own home, their own village – anyone who is forced out of their home or their village, that process will scar them.’

But, despite all of the hardships suffered by troops stationed in Afghanistan for the last 20 years and the fate facing refugees now, Roh still believes the war was worth it – and is far from over.

‘It will become a safe haven for terrorists, it will continue to be the world’s largest drug producer. There is a civil war to be had, but the history of Afghanistan shows the Taliban will not last.’