Dominic Raab refuses NINE times to say when he began Crete holiday during the collapse of Afghanistan, as he accuses ‘partisan’ MPs of going on a ‘fishing exercise’ – but admits in hindsight he should not have gone

Dominic Raab hit out at ‘partisan’ MPs today as he refused nine times to reveal when he started his much criticised summer holiday, which took place as Afghanistan collapsed into Taliban hands.

The beleaguered Foreign Secretary has come under sustained political  attack for staying in Crete as the Islamic extremists carried out their lightning takeover of the battle-scarred nation.

But facing MPs for a grilling on the Western military defeat today he would not say when his family stay at the five-star Amirandes Hotel even began.

And he accused MPs of going on a ‘fishing expedition’ for information when they pressed him on the issue.

He pointed out that he had already admitted that he ‘would not have gone away, with the benefit of hindsight’.

He told the Foreign Affairs Committee: ‘I am not going to start adding to, frankly, the fishing expedition beyond the facts that I have articulated and the fulsome statement and having answered questions on this continuously.’

SNP MP Stewart Malcolm McDonald said the refusal to give an answer was ‘absurd’ while Mr Raab hit back at what he described as party political questions in what is meant to be a neutral setting. 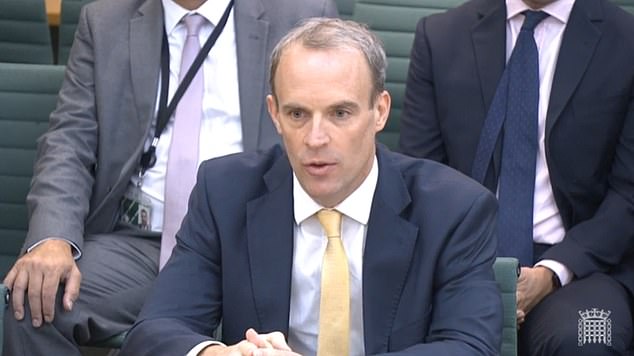 The beleaguered Foreign Secretary has come under sustained political attack for staying in Crete as the Islamic extremists carried out their lightning takeover of the battle-scarred nation. 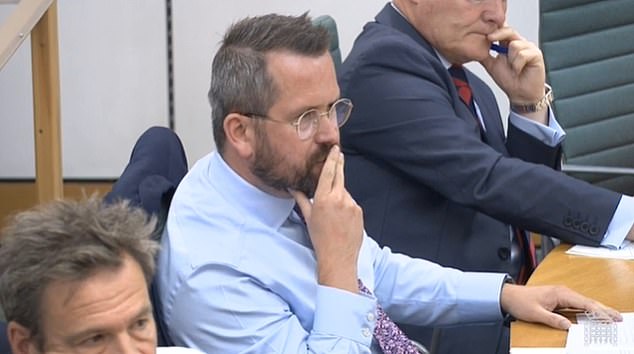 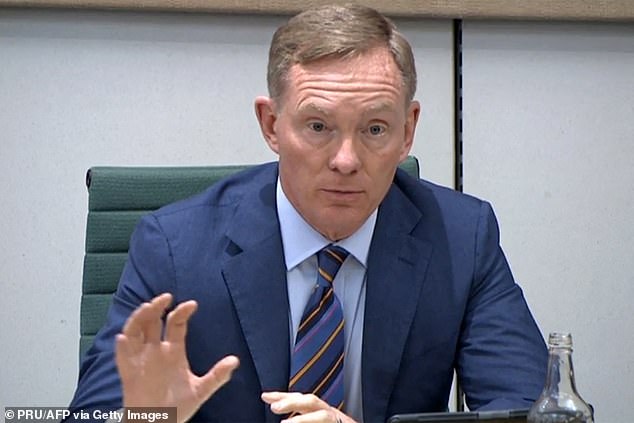 Mr Raab faced strong criticism for not returning from Crete when the situation in Afghanistan began to deteriorate and the Taliban took control of Kabul.

He has said he left to return to the UK on Sunday August 15, and that he was ‘working tirelessly’ throughout that period despite being out of the country.

Mr Raab faced accusations in the media of paddle boarding and swimming at the beach on the last day of his holiday, but following his return to the UK, he described these accusations as ‘absolute nonsense’.

Labour former minister Chris Bryant said: ‘On August 11, the US said the Taliban were likely to seize the whole country, it was just a question of how long it was going to take. Were you already on holiday?’

Mr Raab said the central assessment judged there would be Taliban ‘consolidation of power’ but it would take place in the ‘months following the evacuation’.

Mr Bryant pressed Mr Raab on his holiday, with the minister repeating he ‘would not have gone away, with the benefit of hindsight’, before insisting: ‘I am not going to start adding to, frankly, the fishing expedition beyond the facts that I have articulated and the fulsome statement and having answered questions on this continuously.’

Conservative MP Bob Seely (Isle of Wight) earlier asked if the Government was caught ‘slightly on the hop’ due to an ‘intelligence failure’, with Mr Raab replying: ‘We always try and… game out for these things.

‘We’ve got a very professional way of approaching these things but when they’re wrong… you need to look at how you correct that.’

Mr Malcolm McDonald also told the Foreign Secretary it was a ‘bad idea’ for him, the Prime Minister and senior Government officials to take holidays during the evacuation of Kabul airport, while all military leave was cancelled for the operation.

The Foreign Secretary confirmed that his department’s staff did not have their summer leave cancelled during the evacuation, although the military personnel involved did.

The SNP MP asked: ‘I understand that the involved military leave was cancelled on 23 July. Did you initiate a similar process for the Foreign Office?’

Mr Raab replied: ‘No, what I did was make sure that we had cover, a decent rota, specifically because we didn’t know for how long this would endure.

‘Of course we were pressing for an extension of the window, in which case you need to make sure with emergency responses and indeed your team theatre that you are able to resource those properly but also make sure you can maintain it. Otherwise you have got a much greater risk of mistakes.’

Mr McDonald said: ‘I think many would think that if all military leave was cancelled on 23 July it is a bad idea for yourself, the Prime Minister and several other officials in the FCDO, the Home Office and the MoD to take breaks at that time.’