Brisbane Lions players and officials are among more than 15,000 people in Victoria who have been ordered to get coronavirus tests after a second case of locally acquired coronavirus was discovered in Queensland.

Although Queensland government restrictions remained unchanged on Saturday night, the AFL was busy planning contingencies in the event the two current local COVID-19 cases will trigger lockdowns and border closures in the sunshine state. 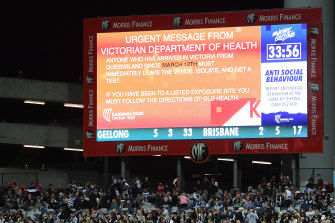 An “urgent health warning’ was shown on the screen during the round two match between the Cats and the Lions.Credit:Getty

If that happens, it will potentially throw the AFL’s delicate fixture into disarray.

It comes as the NRL instructs its clubs to call back any players who planned to play in the Queensland Cup competition this weekend.

Victorian health authorities said they had contacted more than 15,000 people who had entered the state from Brisbane or the Moreton Bay region since March 12 to advise them of their obligations to get tested within 72 hours of entering the state and to stay isolated until they received a negative result.

Health authorities are also cross-checking departmental data against flight manifests to identify any other visitors or returned travellers who may have fallen through the cracks.

Footy fans who had travelled to Victoria from Brisbane were asked to leave Friday night’s match in Geelong between the Lions and the Cats to get tested.

The fixtured Brisbane Lions-Collingwood blockbuster at the Gabba is on track to proceed as planned on Thursday night, but the AFL is prepared to make rapid changes in line with advice from the Queensland government.

It is unclear whether Collingwood, due to fly to Brisbane on Wednesday, would be forced to isolate in a repeat of the measures that were taken for interstate travel last season.

While it is possible the Lions could be forced to play the Magpies in Melbourne if the Queensland situation changed, AFL sources said on Saturday it was too early for such a call to be made and their decision would be dictated by government advice.

Brisbane Lions players and staff were being tested in Melbourne on Saturday afternoon. The team is due to fly back to Brisbane on Sunday morning.

In the past, the Queensland government has expressed confidence in its contact tracing, with another case of community transmission announced among six cases on Saturday. Unlike Victoria, Queensland has allowed 100 per cent attendance at sporting events.

The Lions remain grounded in Melbourne. But Brisbane vice-captain Harris Andrews told SEN that the players and officials were sanguine about the situation.

“We’re going to have to get on the bus and get a COVID test here in Geelong and then go down to Melbourne and stay the night there,” he said. “It’s not ideal but we understand as a playing group and a footy club, we have to be flexible with the situation.”

On the status of the upcoming clash with Collingwood, Lions defender Andrews said: “We’re more concerned about what’s going on today … we haven’t heard anything about the game.”

Melbourne Storm, meanwhile, recalled players it sent to Queensland to play for their feeder clubs, Sunshine Coast Falcons and Brisbane Easts Tigers. The players, who are not part of the first-grade side, were called back to Victoria before they could take the field.

One new case of community transmission has been linked to the Brisbane landscaper who tested positive to COVID-19 on Thursday. Queensland health authorities have not ordered a lockdown.

On Saturday, Victoria recorded no new cases for the 29th day in a row. There were 10,286 test results received in Victoria on Friday. No active cases remain in the state.

The new directions from Victoria’s Health Department meant wait times at many testing centres stretched out on Saturday morning, with other Melbourne sites reaching capacity and turning people away. The Alfred and Sandringham hospitals both reported wait times of at least three hours.

AFLW matches involving Brisbane Lions players went ahead in Melbourne as planned on Saturday afternoon. In the VFL, the Lions’ practice match against Gold Coast was cancelled, with the Suns instead taking on Southport.

A 26-year-old man from Brisbane’s northern suburbs tested positive on Thursday. Authorities believe he had been infectious in the community since March 19.

The man’s infection of the UK strain has been linked to a doctor who treated COVID-19 patients at Princess Alexandra Hospital.

Anyone who has been to one of the public exposure sites in Queensland should contact Victoria’s Department of Health.

Anyone wishing to travel from Brisbane and Moreton Bay now requires an “orange zone” Victorian travel permit, cannot enter if they have any COVID-19 symptoms and will need to isolate and get tested within 72 hours of entering Victoria.

There were six new cases recorded in Queensland on Saturday, five from overseas in hotel quarantine, in addition to the one case with a direct link to the Strathpine man whose positive test was revealed on Friday.