Austin: The 3rd Court of Appeals Wednesday denied Alex Jones' motion to dismiss a defamation lawsuit brought by a Sandy Hook parent and ordered Jones to pay $US22,500 ($37,000) in attorney fees for what they found to be a frivolous appeal.

That means that Jones has now been assessed nearly $US150,000 in legal fees in two cases – one for defamation and another for intentional infliction of emotional distress – brought by Neil Heslin, whose six-year-old son, Jesse Lewis, was one of the 20 first-graders killed along with six school staffers in the December 2012 massacre at Sandy Hook Elementary School in Newtown, Connecticut, which Jones and others on his InfoWars conspiracy news site portrayed as a hoax.

It is rare to see a legal defence so incompetent and disrespectful to the rule of law that it causes a defendant to rack up $US150,000 in fines during preliminary motions before even reaching trial.

Heslin's lawsuit contends that a June 2017 report by Owen Shroyer, an InfoWars reporter and host, suggesting that Heslin could not have held his dead son in his arms as he maintained, was based on a deceptively edited interview with a medical examiner and was intended to buttress the InfoWars narrative that the mass shooting was not what it appeared to be. Shroyer is also named in the suit. 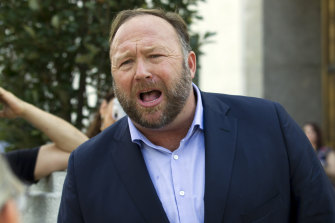 The other sanctions against Jones were imposed last year by state District Judge Scott Jenkins, who had denied motions by Jones' attorney to dismiss the cases.

"The latest ruling from the Texas Court of Appeals shows that InfoWars continues to waste everyone's time with factual misrepresentations and frivolous arguments," said Houston attorney Mark Bankston, who is representing Heslin and Sandy Hook parents in two other lawsuits against Jones and InfoWars.

"It is rare to see a legal defence so incompetent and disrespectful to the rule of law that it causes a defendant to rack up $150,000 in fines during preliminary motions before even reaching trial," Bankston said.

Austin attorney T. Wade Jefferies, Jones' most recent lawyer on the case, did not reply to a request for comment by late on Thursday afternoon (local time).