This is the tense moment an Amazon driver came face-to-face with a huge black bear as he delivered a package in California.

Joshua Morgan was out shopping when he received a notification from his Ring doorbell in Upland, San Bernardino County, that a driver was at his property’s electric gates.

Footage from the doorbell camera shows the bear run across the front of the gate just seconds before the driver arrives. 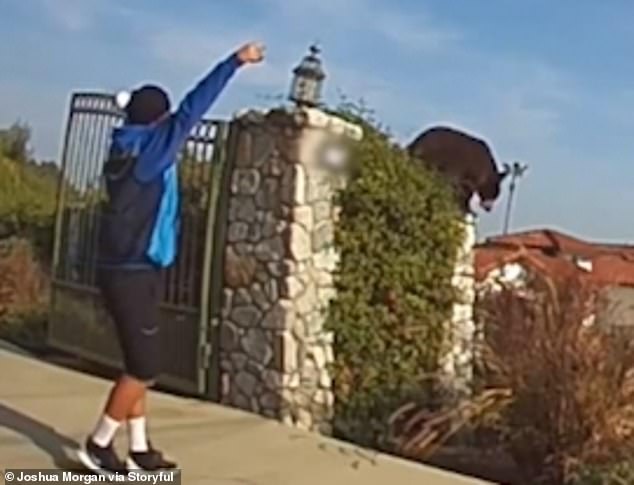 Joshua Morgan was out shopping when he received a notification through his Ring doorbell in Upland, California, that an Amazon delivery driver was at his property’s electric gates with a package 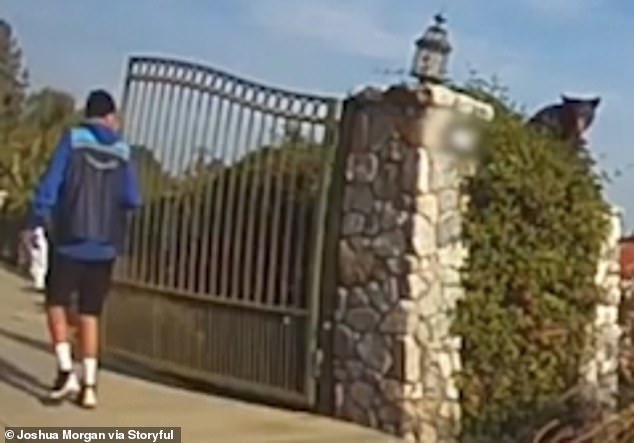 The footage, taken via a doorbell camera last month, shows a huge black bear jump to the top of the property’s stone wall to walk towards him

In the video, taken last month, Mr Morgan is heard telling the delivery driver over the camera speaker: ‘Hey guy, stop right now! There is a bear right there!

The delivery driver steps back slightly before the bear climbs to the top of the property’s stone wall and slowly walks towards him.

The driver keeps still but lifts his arms up to make himself appear bigger than the animal.

The brave move works and the bear quickly jumps off the wall and runs away from the driver – who continues to deliver his parcel.

Mr Morgan said that he often sees wildlife such as bears, coyotes, and mountain lions wander onto his Southern California property.

He told Newsweek: “[The driver] seemed like he knew what to do and he kept calm. We had a conversation with him through our front door camera, explaining we weren’t home, so we couldn’t help directly.

“My wife was watching the gate camera on her phone to ensure the bear really was still gone to give him the go ahead. We were watching his exit the whole time to ensure he safely left.’

The nail-biting video has since been reposted on TikTok by several accounts, and has had hundreds of comments from bemused users. 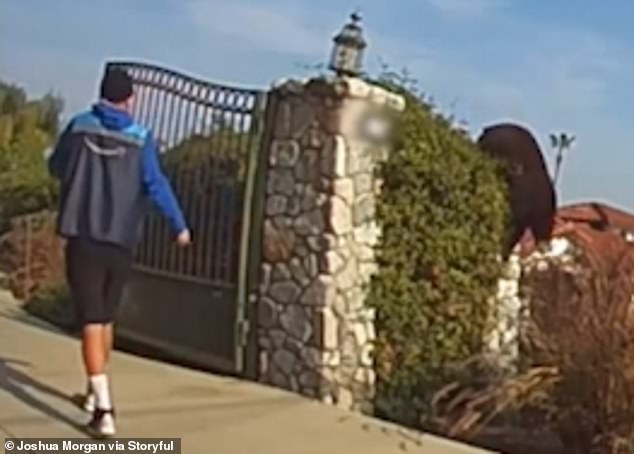 After a few seconds the diver keeps still but lifts his arms up to make himself appear bigger than the animal. The brave move works and the bear quickly jumps off the wall and runs away from the driver – who continues to deliver his parcel 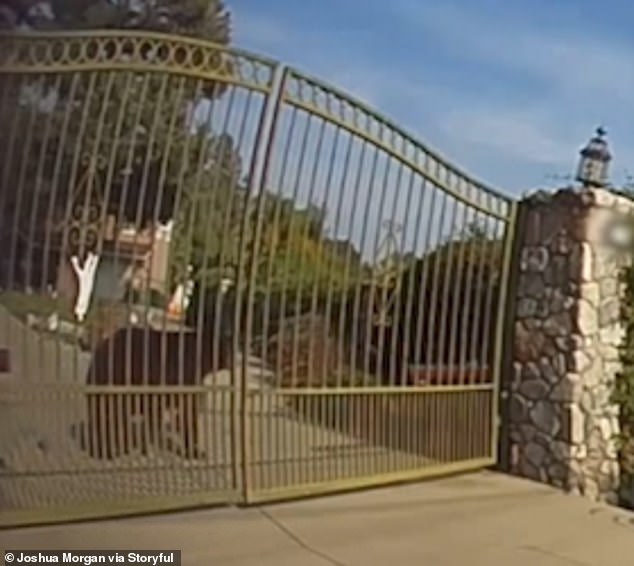 Just seconds before the driver arrives, the black bear is seen running across the front of the gate

One viewer said: ‘Somebody paid attention to the Discovery channel!’

Another added: ‘He put up his arms showing dominance, he meant business delivering that package lol’

One other viewer said: ‘”Take it up with Jeff Bearzos; I’ve got a package to deliver”’

The driver did the right thing on encountering the bear as advice tells you to stay calm and remember that most bears do not want to attack you – they usually just want to be left alone.

Bears may bluff their way out of an encounter by charging and then turning away at the last second, but it is important to never make a sudden movement and always speak in low tones.

If you see a bear in the distance, you should respect its need for personal space and give it as much room as possible. Making yourself appear larger than the animal can also work as a deterrent – and moving to higher ground can aid that.

If a bear seems aggressive or non-defensive you should act aggressively. Local advice says to look the animal straight in the eyes and let it know you will fight if attacked by making yourself look big and shouting as loud as possible. You can also stamp your feet or threaten it with bear spray or a stick.