FIRST ON FOX: An American mom trapped in Taliban-controlled Afghanistan is worried she’ll never see her kids again and in hiding with family members and Afghan allies – unable to reach Kabul’s U.S.-held airport for a chance at an evacuation, she said Saturday.

“I really have given up hope, given up on the hope of going to the airport,” the woman, whose identity is being withheld due to concerns for her safety, told Fox News. “It’s just not possible to make it through all those people.”

She said there are as many as 20 Taliban checkpoints between her and the airport – and she’s one of an uncertain number of American citizens trapped behind enemy lines.

Every moment that a car passes by, I feel like they are going to pull in and execute us. I don’t know if I’m going to see my children again.

She was whipped by Taliban fighters on one attempt to get through, she said. A man standing near her was shot in the head on another try, leaving his wife and baby in tears. Since then, she’s been in hiding.

“We are devastated,” she said. “We’re scared for our lives. Every moment that a car passes by, I feel like they are going to pull in and execute us. I don’t know if I’m going to see my children again.”

She said the situation was dire – even hopeless. She would rather commit suicide than allow the Taliban to capture her. And despite Taliban assurances to the U.S. that Americans would be allowed to pass through the checkpoints surrounding the airport, she said she fears showing her U.S. passport to militants who could be members of other terror groups, including ISIS and al Qaeda.

“They’re labeled as Taliban, but who really knows?” she said. “They don’t have a uniform on, a proper military uniform or law enforcement, where you can recognize them. They’re all armed.”

She had a message for the president, speaking through tears: “Please, Mr. President, please evacuate us. We need help.” 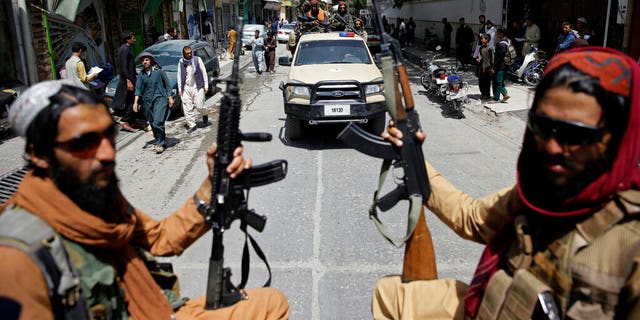 Taliban fighters patrol Kabul, Afghanistan, Thursday, Aug. 19, 2021. The Taliban celebrated Afghanistan’s Independence Day on Thursday by declaring they beat the United States, but challenges to their rule ranging from running a country severely short on cash and bureaucrats to potentially facing an armed opposition began to emerge. (AP Photo/Rahmat Gul)

The White House did not immediately provide a response to this woman’s plea.

As of Saturday evening, she was in hiding with her aunt, a former Afghan parliament member, her uncle, as well as an undisclosed number of contractors and children.

Her brother, a former military translator and contractor who is now in the United Kingdom, said at least two of his colleagues had been killed by Taliban fighters in the past two days. And sources told Fox News earlier this week that three captured Afghan National Army commanders were hanged by the Taliban in Kabul as the militants were banging on doors, seeking out people who had worked with U.S. and coalition forces.

The traffic starts miles away from the airport. It’s probably two, three miles, with thousands of people put together like little matchsticks with no space between them.

“They’ve been going to a lot of homes pulling out high-ranked Afghans, law enforcement, people who worked with the U.S. military or NATO,” the woman said.

In a 27-second audio recording sent to West Virginia Rep. Carol Miller’s office, she can be heard struggling to speak through her tears.

“Hour by hour it’s getting more difficult,” she says, between sobs. “Even when the cars pass by I feel like they’re gonna stop at the door out there and the Taliban out there are gonna come in and kill us.”

In a separate message, she told Miller’s office that she had “no hope” of seeing her children again.

The woman’s husband, who is safely in Virginia with their children, told Fox News that the State Department has been of little assistance and that they are communicating primarily with Miller’s office.

The congresswoman’s office confirmed her status as an American citizen and helped connect Fox News with her to raise awareness of the severe threat to Americans and Afghan allies trapped behind Taliban lines.

The family also said they fear that the Taliban could impose an internet blackout – effectively shutting down all communications apps and hiding extremist activities from the rest of the world. 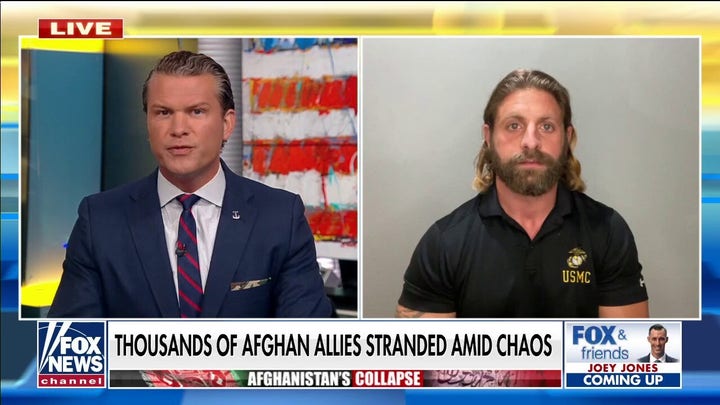 At that point, the woman’s brother said the Taliban would “massacre of a lot of people.”

Secretary of State Antony Blinken said on a conference call with U.S. senators Friday evening that the Pentagon was “exploring options” for how to evacuate American citizens, according to a source on the call. And the military sent three chinook helicopters outside the airport perimeter to retrieve 169 Americans at a rendezvous point Friday, authorities said, even after officials said they wouldn’t be doing external rescue missions.

For non-Americans, however, “they’ll have to figure out how to get to Kabul,” Blinken said. There are tens of thousands of Afghan allies who worked with U.S. forces over the past two decades.

And if and when they reach Kabul – it’s swarming with Taliban fighters dead-set on hunting down and killing them.

“The traffic starts miles away from the airport,” the trapped American woman said. “It’s probably two, three miles, with thousands of people put together like little matchsticks with no space between them.”