Some years ago I rode a motorcycle alone around Ireland and regularly found myself pulling over to the side of the road and trudging along paths to peer in awe at ancient standing stones.

I was, then, among numerous travellers who drift across the world to gape at prehistoric stone circles and tombs and henges, perhaps seeking a connection to the seeds of our humanity, or to speculate about the stones’ cosmic alignment with the movement of the sun and the moon and the stars, or simply to imagine druids chanting in the forever. 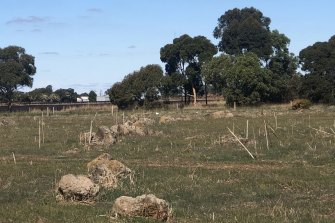 I did not need to go to Ireland or the United Kingdom, however, to find enchanted stones.

My home country, western Victoria, was cast in the furnace of volcanoes.

You can, if you know how to look, identify more than 400 volcanic upthrusts, craters, maar lakes, scoria cones and calderas in the region.

All their detonations delivered great spatters of stone and rivers of lava to the landscape and the Aboriginal people long, long ago began using the stone for housing, for trapping and conserving eels and for ceremonial purposes.

It is to the loss of generations of newer Australians that it has taken most of us so long to begin to accept that stone has been used across our landscape for longer, most likely, than in the northern hemisphere.

The stone arrangements of the western district, of course, are less monumental than the famous stones of Britain and Ireland.

The Aboriginal people lived within the land, rather than imposing their will upon it.

It is likely, too, that many, if not most, of their ancient stone arrangements were cleared away by Europeans who came and stole the land for their sheep and cattle.

An Aboriginal stone arrangement shaped like an eel in Lake Bolac, part of which was removed.Credit:Joe Armao

For all that, the use of stone delivered by volcanoes is surely no less significant than the megalithic and neolithic structures of the north.

At Warrnambool scientists have discovered Aboriginal stone fireplaces that sit beneath the ash crust of the last explosions of Tower Hill, which occurred 33,000 years ago.

It is only two years, however, since UNESCO finally recognised as worthy of world heritage status the use of stone to build the world’s first sophisticated aquaculture system, in the lava country of Budj Bim near Heywood.

All of which provides some context for the outcry this week that accompanied the revelation that a landholder had removed around 20 tonnes of stone from an arrangement of standing stones that appears to have had no purpose beyond the ceremonial and perhaps, the spiritual.

Stretching hundreds of metres across a paddock near Lake Bolac, the stones follow a gentle, perfect arc ending in a swirl of a tail, though 60 metres of it are gone now.

It is so close to the Glenelg Highway that some stones were lost decades ago when road builders straightened and widened the highway.

It says something about our cultural history that this earlier desecration occurred almost without public comment, let alone furore.

It says something, too, that I – having been bewitched by ancient stone arrangements on the other side of the world – had no idea that the Lake Bolac stone column existed, though I had driven past it dozens of times.

If you need to know how to look at the western Victorian landscape to properly understand its volcanic beginnings, you clearly need new eyes to discern the imprint of ancient human culture upon it.

The singer-songwriter Neil Murray recalls driving towards Lake Bolac at sunset in 1993 and being astonished to discern the shining outline of the line of stones, and knowing instantly that here was something of ancient origin.

He had been raised in the Lake Bolac district, but had since spent time in Aboriginal communities in the Northern Territory, an experience he believes gave him a valuable new way of seeing.

Murray phoned the famed “wisdom man” Uncle Banjo Clark, of the Framlingham Aboriginal settlement near Warrnambool, to inquire what the stone arrangement might represent.

And of course, that is what it is called – the eel, or in the Djab Wurrung tongue, the Kooyang or Kuyang.

Just across the paddocks lie the waters of Lake Bolac, where each autumn Aboriginal clans gathered to harvest eels.

Indeed, in 1840, a team of 16 stockmen led by David Edgar turned up at the lake, intending to water a large mob of sheep and cattle. But the lake was only 30 centimetres deep and numerous indigenous people stood in it, harvesting eels.

Brandishing spears, according to a later report in The Hamilton Spectator, the indigenous assembly – at least 150 men, exclusive of women and children, according to the writer – angrily refused the stockmen’s wishes. The hours-long confrontation ended only when the travelling party agreed to move on to another watering hole and left the Aboriginal people to their eeling.

Lake Bolac’s modern autumn celebration of song and dance and culture continues to be the Eel Festival.

Neil Murray, having had his eyes opened by ancient stones at sunset, pioneered in 2005 the idea of holding a “healing walk” before each festival, travelling by foot across volcanic Djab Wurrung land in the company of indigenous people and others in memory of the old people, long gone.

Which, you’d have to say, wasn’t before time.