Eight people have been arrested for allegedly harassing and intimidating police officers who worked at a violent anti-lockdown rally in Melbourne last month.

Thousands of people marched through the CBD to protest Victoria’s lockdown restrictions on August 21, in breach of stay-at-home directions. 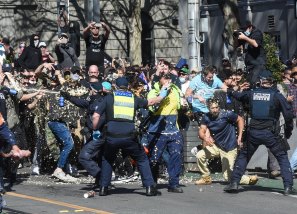 Police have since been investigating alleged threats against officers on social media, mobile devices and email.

The messages, seen by The Age, included the names, faces and contact details of some frontline police. Some messages allegedly went as far as to include threats of retribution against specific police and their families.

Four people have since been charged, while the other four have been released and are expected to be charged later.

A 35-year-old Hillside woman was charged with intimidation of a law enforcement officer, using a telecommunications device to harass and committing an indictable offence while on bail. She has been bailed to appear at the Sunshine Magistrates Court in January.

A man from Geelong, aged 37, was also charged with intimidating a law enforcement officer and using a telecommunications device to harass. He was bailed to appear at the Geelong Magistrates Court in December.

A 33-year-old man from Keilor was charged with intimidating a law enforcement officer and has been bailed to front the Sunshine Magistrates Court in March next year.

A 34-year-old man from Frankston North will face the Frankston Magistrates Court in March, charged with intimidating a law enforcement officer, using a telecommunications device to harass and cannabis possession.

A 63-year-old man from Buffalo River, a 40-year-old Croydon North man, a 34-year-old Portland woman and a 33-year-old Frankston South man were released and were expected to be charged on summons.

The investigation into the alleged online threats continues.

Anyone with information about criminal activity is asked to come forward and report to Crime Stoppers on 1800 333 000 or via www.crimestoppersvic.com.au.