The grand palace that once belonged to Genghis Khan’s grandson may have been discovered in Turkey, archaeologists say.

Hulagu Khan was a Mongol warlord who lived from 1217 to 1265 and conquered much of southwest Asia.

He is known for the 1258 sack of Baghdad, then the religious and cultural capital of Islam, which destroyed much of the historic city.

Hulagu’s father was the fourth son of Genghis Khan, who founded the Mongol Empire stretching across the Middle East and Asia.

Genghis Khan is estimated to have killed around 40 million people during his campaigns – around five to 10 per cent of the world population at the time. 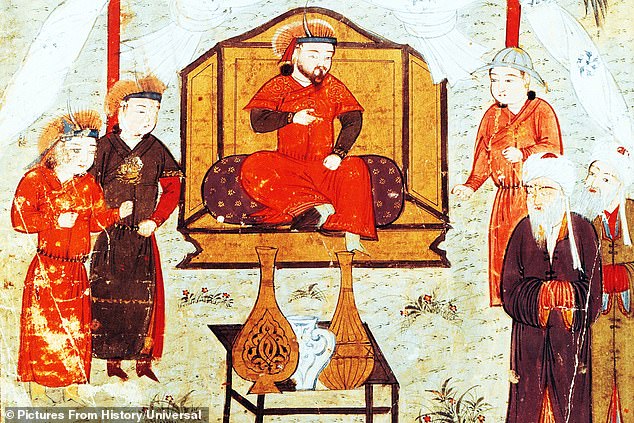 A 14th-century depiction of Hulagu Khan (centre), who ruled the Il-Khanate in across the Middle East in much of modern-day Iran, Iraq and Turkey

The Mongol Empire broke up into smaller kingdoms in the years after Genghis Khan’s death, one of which was the Il-Khanate lead by Hulagu Khan, which occupied much of modern Iran, Iraq and Turkey.

The sack of Baghdad

Perhaps Hulagu Khan’s most infamous attack was the savage sack of Baghdad in 1258.

The attack was part of Hulagu’s campaign to bring the Islamic world under Mongol control, especially in Persia – modern-day Iran.

The sack of Baghdad saw the destruction of The House of Wisdom, one of the great centres of learning in the Arab world filled with documents collected over 500 years.

Eyewitness accounts say so many books from the library were thrown into the River Tigris, they formed a bridge strong enough for a man to ride a horse over.

Others said the waters of the river ran black with ink and red with blood.

Some historical sources mention a summer capital in the kingdom with a huge palace, but do not say exactly where it was.

Archaeologists now believe they have discovered the site of the Khan’s palace in Van province in eastern Turkey.

The palace was recorded by 13th-century Armenian historian Kirakos of Ganja and other sources as being near Lake Van, but its exact location has never been confirmed.

The team excavating the site say the palace has been heavily looted and damaged. They added they had found glazed roof tiles, porcelain and pottery from the palace ruins.

Munkhtulga Rinchinkhorol of the Mongolian Academy of Sciences said the team have also discovered ‘tamga’ or ‘svastika’ symbols – ‘power symbols’ of Mongol Khans and other parts of the mediaeval world before being appropriated by the Nazis in the 20th century.

He added the symbols discovered by archaeologists are a key reason they think the palace belonged to Hulagu Khan. 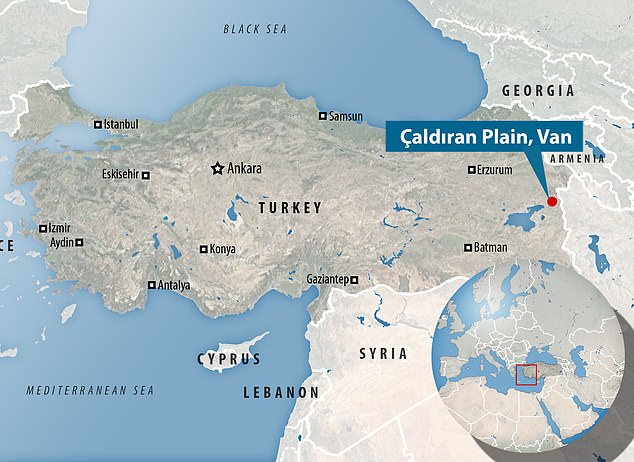 Other archaeologists not involved in the project said more research was needed to confirm the site was the stronghold of the Mongol lord, but that it was very possible.

Timothy May, professor of Central Eurasian History at the University of North Georgia said although more investigation was needed: ‘It is possible that it is Hulagu’s palace.’

He added: ‘The scholars involved are very good and may be correct.’

Michael Hope, chair of Asian Studies at Yonsei University in Korea said: ‘Whether this is the palace of Hülegü described by Kirakos remains to be seen. I certainly wouldn’t rule it out, but I am hungrily waiting for more information.