Tense moment carjackers allow young woman to remove her disabled husband’s wheelchair while holding a gun to their friend’s head, before speeding away in their vehicle

A pair of gun-toting carjackers showed a rare moment of compassion when they allowed a married couple to remove the disabled husband’s wheelchair out of their SUV before they stole it.

The incident took place Tuesday evening in the Buenos Aires town of San Martín, Argentina, when Laura Flores parked her Volkswagen Tigua in front of her friend’s home, according to Argentine news station TN.

The residence’s surveillance video shows the friend, identified only as Walter, walk up to greet Flores before one of the two assailants approached him from behind and placed him in a choke hold while aiming a gun to his head. 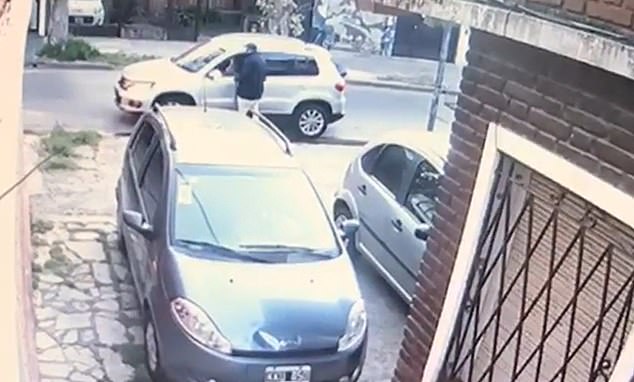 Walter (pictured) approached the vehicle of married couple Laura Flores and José Bálsamo moments before they were held up by two carjackers Tuesday outside his home in Buenos Aires, Argentina 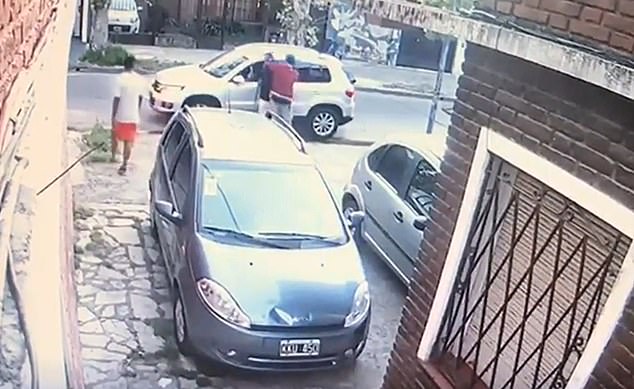 The second carjacker then pried the driver’s door open and forced Flores out of the vehicle.

She then walked towards the rear of the vehicle and opened the hatch to pull out a wheelchair for her husband, José Bálsamo, who remained seated in the front passenger seat during the entire ordeal.

The carjackers initially had trouble operating the SUV before they managed to speed away. 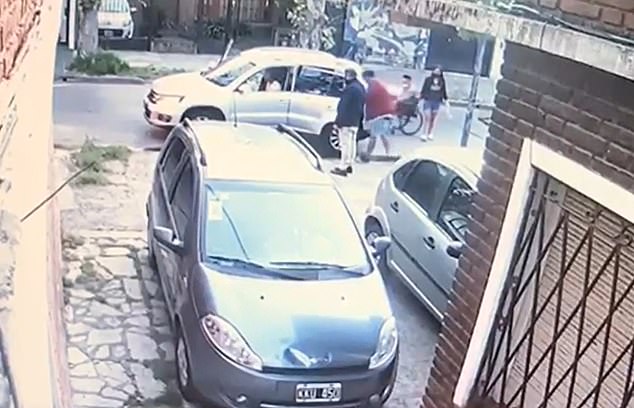 Laura Flores and her husband José Bálsamo (pictured in the wheelchair) were carjacked while visiting a friend Tuesday in Buenos Aires, Argentina.

Walter said the men threatened to kill them and that the vehicle was abandoned near the carjacking scene.

‘The guys were good. They were not aggressive nor did they hit us. It was just a scare. They allowed for the wheelchair to be taken out,’ he said.

‘The car was found five blocks away. I am very happy with how the police treated us. The criminals were telling me they were going to kill us. I never see the guy. He comes from behind and the truth is that it surprized us. I was bad. I blacked out and I don’t remember anything.’

Authorities had not reported any arrests as of Thursday.