We have made our live coverage of the coronavirus pandemic free for all readers. Please consider supporting our journalism with a subscription.

Melbourne and regional Victoria to be reunited tonight

Melburnians will be able to reunite with friends and family based in rural and regional Victoria from 6pm tonight (AEDT).

Greater Melbourne has been cut off from the regions since early August in what was originally supposed to be a seven-day lockdown. Melbourne’s sixth citywide lockdown, which ended last week, stretched on for more than two months.

Traffic is expected to be heavy across Melbourne this afternoon. However, police say they will exercise some discretion if people decide to leave the city before 6pm.

Tourism and hospitality businesses outside of Melbourne are thrilled for an influx of customers, but some regional residents are worried about the spread of COVID-19. In Wodonga, in the state’s north east, testing sites have been closing in the early hours of the morning due to high demand.

A number of other changes also come into effect for Melburnians from 6pm today. Gyms and non-essential retail will reopen (subject to density limits) and masks will no longer be mandatory outside (unless social distancing isn’t possible).

Gladys Berejiklian and her then-boyfriend Daryl Maguire talked of love, marriage and even a baby during their secret five-year relationship, while the former premier promised to “throw money” at Mr Maguire’s electorate days after he was forced to resign under a corruption cloud in 2018.

In a dramatic day of intercepted phone calls, text messages and emails, NSW’s corruption watchdog heard Mr Maguire’s account of the “close personal relationship” now at the centre of an extended corruption probe. 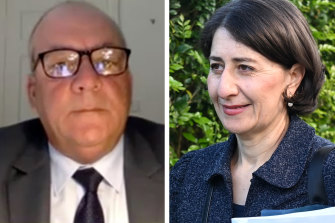 Ms Berejiklian will begin two full days of evidence to the Independent Commission Against Corruption today, following nine days of testimony from bureaucrats, a former premier, former deputy premier and, yesterday, her ex-boyfriend: the disgraced former member for Wagga Wagga.

The inquiry is examining whether Ms Berejiklian breached the public trust or encouraged corrupt conduct during her undisclosed relationship with the former MP. She has previously denied any wrongdoing.

French President Emmanuel Macron says Prime Minister Scott Morrison “broke the relationship of trust” between both countries and has to be the one to repair the damage, in the pair’s first phone call since Australia terminated a $90 billion submarine contract.

Macron phoned Morrison shortly before the Prime Minister flew out of Canberra yesterday evening (AEDT) to attend the G20 summit in Rome and COP26 climate talks in Glasgow. 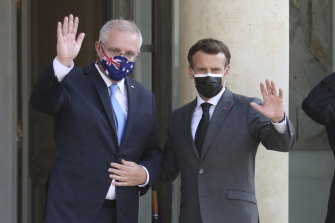 A major diplomatic brawl erupted last month when the federal government axed a deal for France to design and help build 12 diesel-powered submarines in favour of a new defence partnership with the United States and United Kingdom known as AUKUS.

The call paves the way for a possible brief meeting between Macron and Morrison in Rome or Glasgow but nothing has been confirmed.

It’s Friday, October 29. I’m Broede Carmody and I’ll be anchoring our live coverage for the first half of the day.

Here’s everything you need to know before we get started.