Babies born in the Covid pandemic ‘have lower IQs’: Three-month-olds now score around 80 on intelligence tests – compared to 100 before the virus struck, research says

Children born during the Covid pandemic have lower IQs because of reduced interactions during lockdowns, a study has claimed.

Mean IQs for children aged three months to three years old dropped from around 100 in the decade before the pandemic to 78 during it.

And the drop-off was worse in boys and those from poorer backgrounds, scientists said.

Lockdowns have meant children have significantly less interaction with the outside world, leading to ‘shockingly’ low cognitive development.

Whether or not the fall in development will affect the children in later life is uncertain. Babies’ brains are more malleable than adults and it is likely they will be able to recover.

Dr Sean Deoni, lead author of the study and associate professor of paediatrics at Brown, said the drop-off in IQ scores was significant.

He told The Guardian: ‘It’s not subtle by any stretch. You don’t typically see things like that, outside of major cognitive disorders.’ 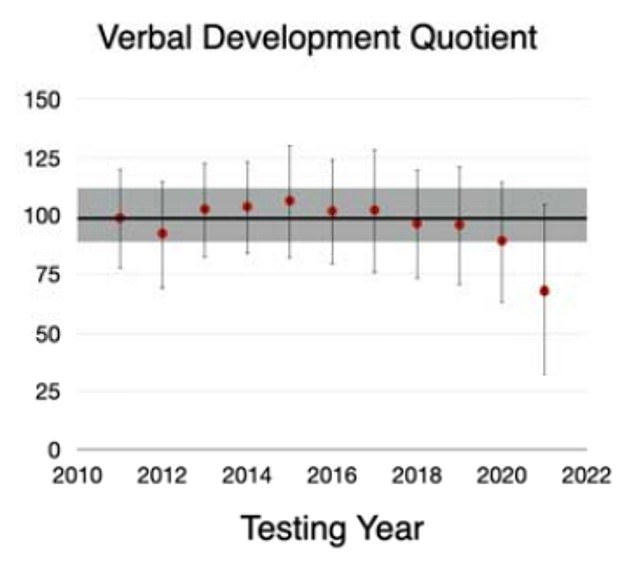 Children born during the Covid pandemic have lower IQs because of reduced interactions during lockdowns, a study by Brown University, Rhode Island, has claimed. Graph shows: Babies’ verbal development each year since 2010 (100 marks the average score over time) 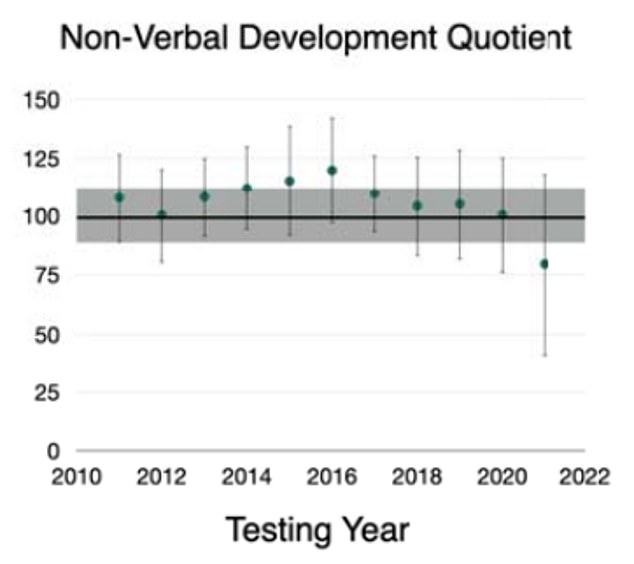 Graph shows: Non-verbal development in babies each year since 2010 (100 marks the average score over time) 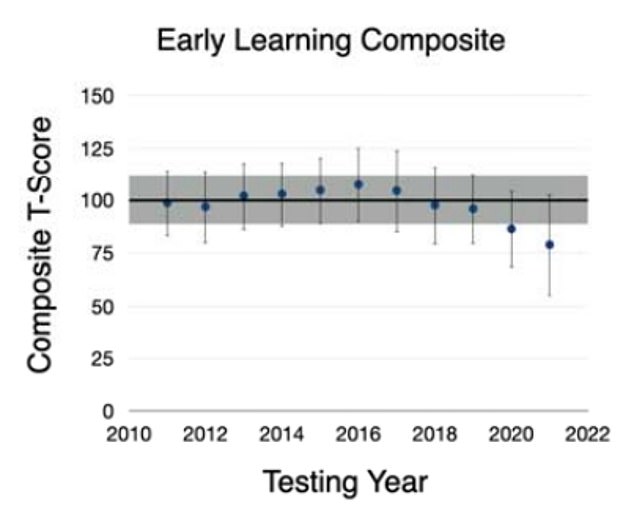 Graph shows: Early learning in babies each year since 2010 (100 marks the average score over time)

IQ stands for Intelligence Quotient and it is used to measure mental ability.

The abbreviation ‘IQ’ was first coined by psychologist William Stern to describe the German term Intelligenzquotient.

Historically, IQ is a score achieved by dividing a person’s mental age, obtained with an intelligence test, by their age.

The resulting fraction is then multiplied by 100 to obtain an IQ score.

An IQ of 100 has long been considered the median score.

Because of the way the test results are scaled, a person with an IQ of 60 is not half as intelligent as someone with an IQ of 120.

The arrangement of IQ scores also means that results are ‘normally distributed’, meaning just as many people score either side of the average.

For example, the same amount of people score 70 as people who score 130.

Although the accuracy of intelligence tests is somewhat disputed, they are still widely used.

For Mensa, the acceptance score requires members to be within the top two per cent of the general population.

Depending on the IQ test, this can require a score of at least 130.

The study, which has not yet been peer-reviewed, looked at 672 children in Rhode Island.

Scientists tested the children on verbal, non-verbal and early-learning skills to assess their development. They calculate an early composite rather than using the usual IQ test used for adults.

All the children were born at full-term and were mostly white. Experts found children from lower socioeconomic backgrounds fared worse in the tests.

Dr Deoni said: ‘Parents are stressed and frazzled. That interaction the child would normally get has decreased substantially.’

He said while the fall in IQs at early ages will not guarantee children are less intelligent in later life, the ‘ability to course-correct becomes smaller, the older that child gets’.

The main factor behind the drop-off in performance in tests was parents’ stress while working from home, the authors said.

They added mask-wearing by adults may have also impacted babies’ development because children were less able to learn from facial cues.

The authors wrote: ‘Fear of infection and possible employment loss has placed stress on parents, while parents who could work from home faced challenges in both working and providing full-time attentive childcare.

‘Moreover, we find that males and children in lower socioeconomic families have been most affected.

‘Results highlight that even in the absence of direct SARS-CoV-2 infection and Covid illness, the environmental changes associated Covid pandemic is significantly and negatively affecting infant and child development.’