EVERY summer, Instagram feeds are swamped with sun-tanned holidaymakers posting snaps of themselves swimming with dolphins.

But behind the idyllic snaps, there may lie a tormented smile – one that can even hide teeth filed down to 'flat stumps'. 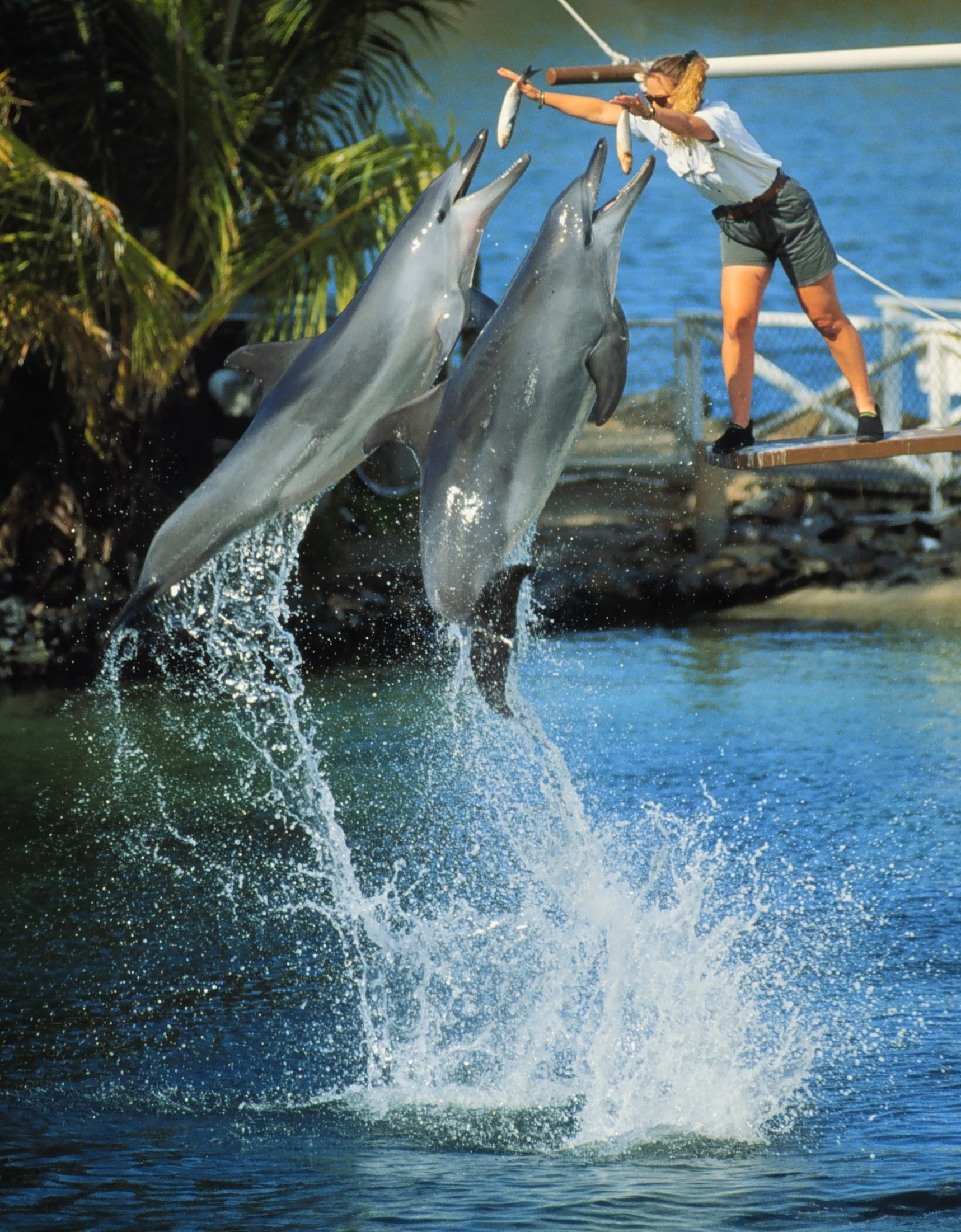 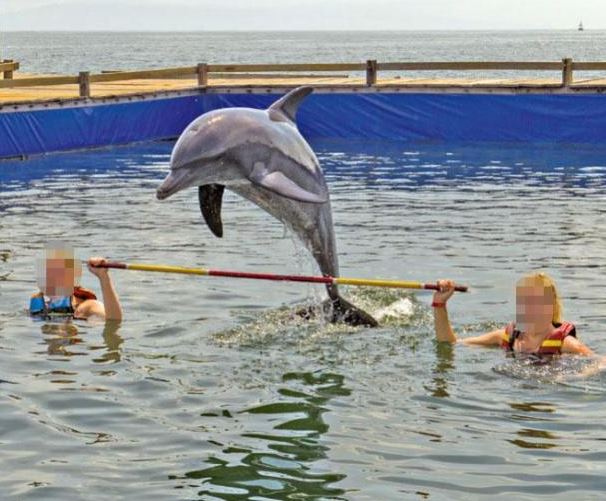 It could deal a hammer blow to tourist entertainment venues around the world, where there are an estimated 3,000 dolphins in captivity.

Here, we look at the troubled history of the industry – from how babies have been ripped from their traumatised mothers to allegations of drugging, forced impregnation and even being fondled by strangers.

The majority of dolphins inside aquariums have been born as part of breeding programmes – however, this isn't always the case.

For years, fishermen have trawled Japanese waters in 'drive hunts' – where they look for large pods of dolphins and herd them into a bay.

The dolphins are either killed or captured to sell to venues all over the world.

Those who have witnessed the hunts say the blood of slaughtered sea creatures turn the waters red and mothers and babies are separated.

This year's hunting season, which goes from September until March, could see up to 1,849 dolphins captured alive or dead, Nat Geo reported.

Around half of them were sold to 12 different countries – including 216 to China, 36 to Ukraine, 35 to South Korea, 15 to Russia, 11 to Thailand and one to the United States.

The others went to Japanese aquariums and zoos – and despite outcry from activists, it continues to this day.

In 2015, the Japan Association Of Zoos And Aquariums (JAZA), which accredits venues, banned members from buying wild dolphins.

In protest, some of the spots rallied against the ban by withdrawing their membership from the group. 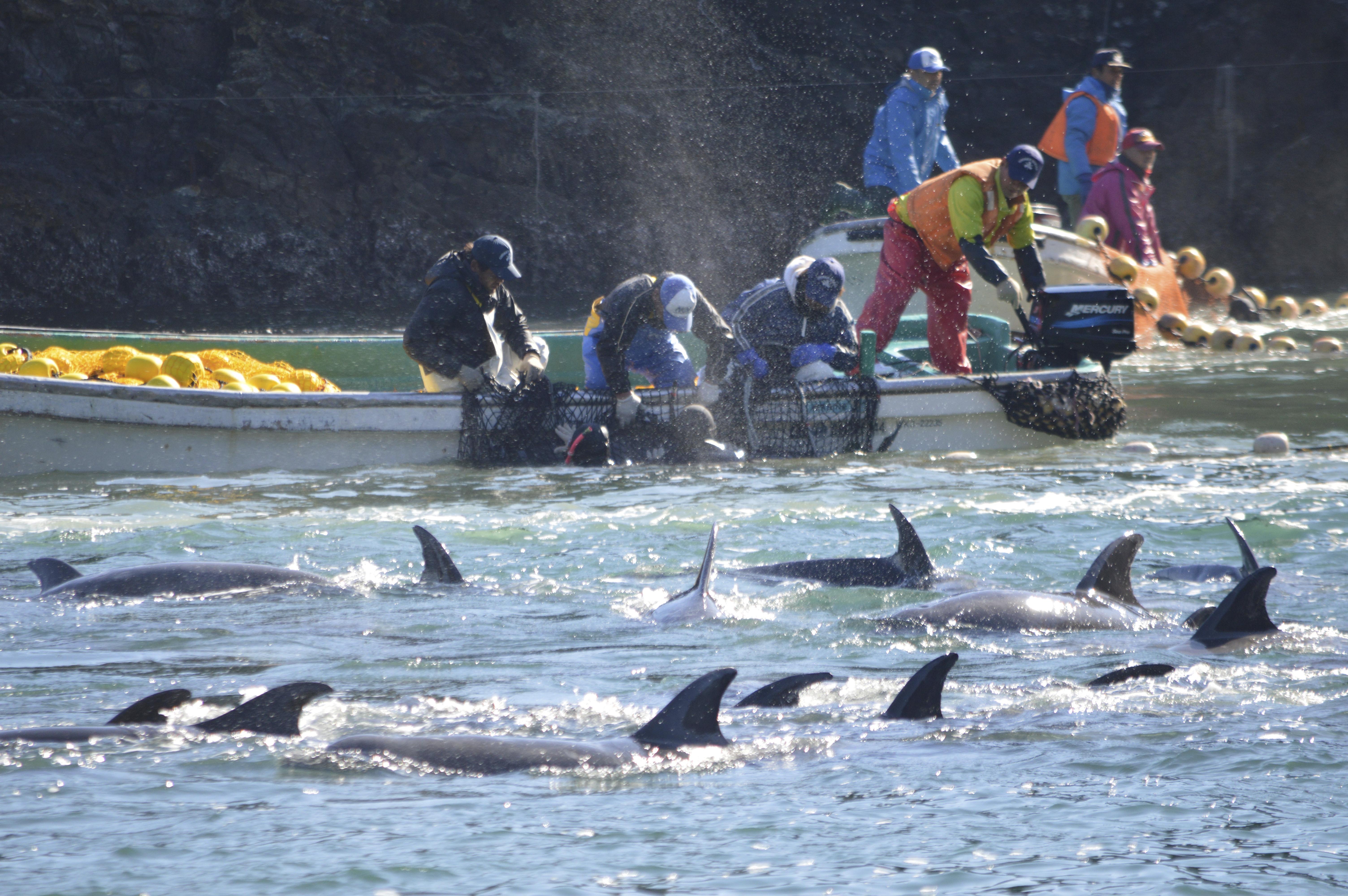 Peta and other animal rights charities have claimed many parks treat dolphins like “breeding machines”.

A 2005 study of the theme park SeaWorld revealed female dolphins “were premedicated with diazepam” before being artificially inseminated.

Peta claimed it was “forced impregnation” because females were “torn out of the water” and at times had been “drugged so they couldn’t fight back”.

They also cited another study from one year earlier, where scientists described how SeaWorld staffers were taught to extract semen from male dolphins.

“Everything about these traumatizing practices goes against the natural breeding habits of whales and dolphins,” Peta wrote.

The group recalled the story of Ariel, a dolphin who gave birth six times between 2000 and 2014.

Many have criticised the industry for putting on "circus-like shows" that included dolphins in the past, but it seems some companies are putting an end to that practice.

Last year, SeaWorld announced trainers would no longer ride on dolphins’ faces as part of their shows after a Peta petitioned claimed it caused the animals pain.

However, elsewhere in the world, shocking examples of alleged abuse continues.

A 2018 report claimed dolphins had their teeth “filed down to flat stumps” or removed entirely at some venues in Indonesia.

World Animal Protection described the act as “painful” and “traumatic”, explaining it was carried out to stop them “biting trainers and tourists”.

They branded the practice “disturbing” as it was to ensure visitors could “kiss” the dolphins.

The charity also claimed the creatures were subjected to “inhumane treatment for the rest of their lives” and that chlorine in the pools risked causing blindness.

They slammed certain venues for encouraging dolphins to perform “beaching” – where they dive out of the water on to dry land – because it damages their organs. 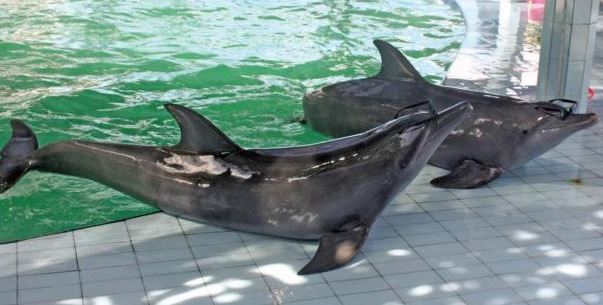 ‘Starved to perform tricks for food’

Last week, Girls Aloud singer Kimberley Walsh came under fire after sharing a photo of her family posing with a captive dolphin in Dubai.

The 39-year-old was accused of animal cruelty by followers, with one writing it was “definitely not a good idea” and another branding it “hugely disappointing”.

Peta’s director Elisa Allen argued it was unlikely that the star had seen The Cove – a 2009 documentary that looked into how dolphins were caught in Japan.

“If she had, she’d understand that dolphins used for these encounters are often violently torn away from their families and ocean homes,” she told The Mirror.

“Instead of exploring, raising their young, and swimming vast distances, dolphins in captivity are forced to spend decades performing confusing tricks in cramped tanks while being fondled by strangers.”

Atlantis Dubai, where Kimberley visited, told The Sun that they had “a dedicated expert animal care team” who ensured “high animal welfare standards”.

Save The Dolphins noted that dolphins in captivity – no matter the location – were “under a great deal of stress”.

They highlighted that the creatures “live in very small tanks” away from family members and many die from fungal and bacterial infections.

"There is little for them to do except swim in circles and log at the surface for hours,” the organisation added.

“They are often kept hungry so they will perform tricks for food. Their diet is made up of dead fish that have been previously frozen."

Not only that, it's previously been reported that many dolphins are left traumatised after swimming around for hours despite their exhaustion.

Some have resorted to methods that have been compared to self-harm by experts.

They include one dolphin repeatedly ramming its head against a tank in Singapore and others leaping out of the containers elsewhere. 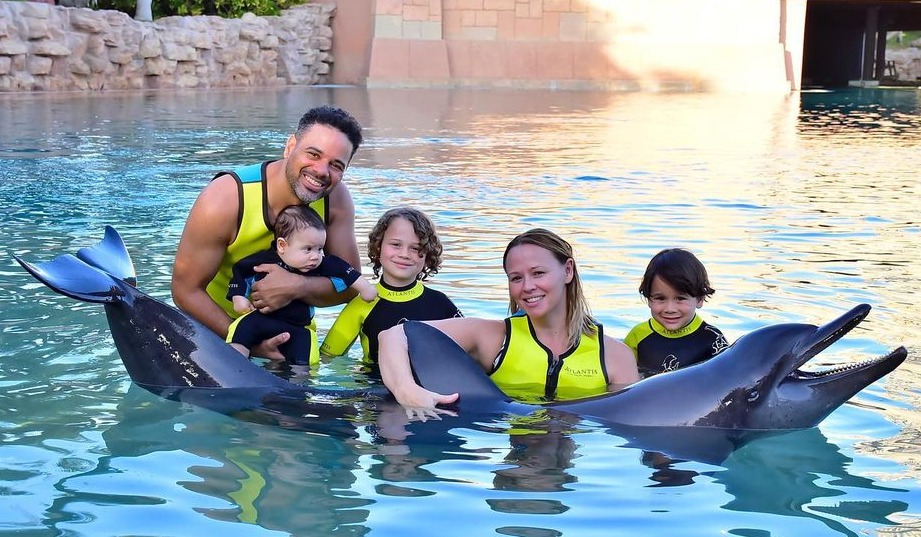 Former trainer Malcolm Brenner claimed to have had a “sexual relationship” with a dolphin named Dolly for six months.

In 2014, he told the Mirror that she “announced her intentions” to him and claimed to have “made love” to the creature while he worked in Florida.

Malcolm wrote a book named Wet Goddess, which was supposedly based on his own experiences, and claimed what happened was “only unusual” because it “doesn’t happen very commonly”.

His “relationship” with the dolphin was not illegal at the time because bestiality wasn't banned in the state until 2011.

Dolly died nine months after meeting Malcolm following the park’s closure and her being moved to another location.

He believes the creature ended her own life by refusing to breathe – an act that depressed dolphins can choose to do.

Malcolm isn’t the only one. Researcher Margaret Howe claimed a dolphin named Peter developed a “romantic and sexual attachment to her”.

She was tasked with trying to teach him to speak in the Sixties and as part of the experiment she ate, bathed and played with the creature alone.

"I carry a long-handled broom with me to ward him off," Margaret told the Daily Mail.

"This is not always the case, we have had several long 'loving' sessions."

After funding for the experiment dried up and the pair were separated.

She said Peter’s health deteriorated after that and later the dolphin also took his own life by holding his breath. 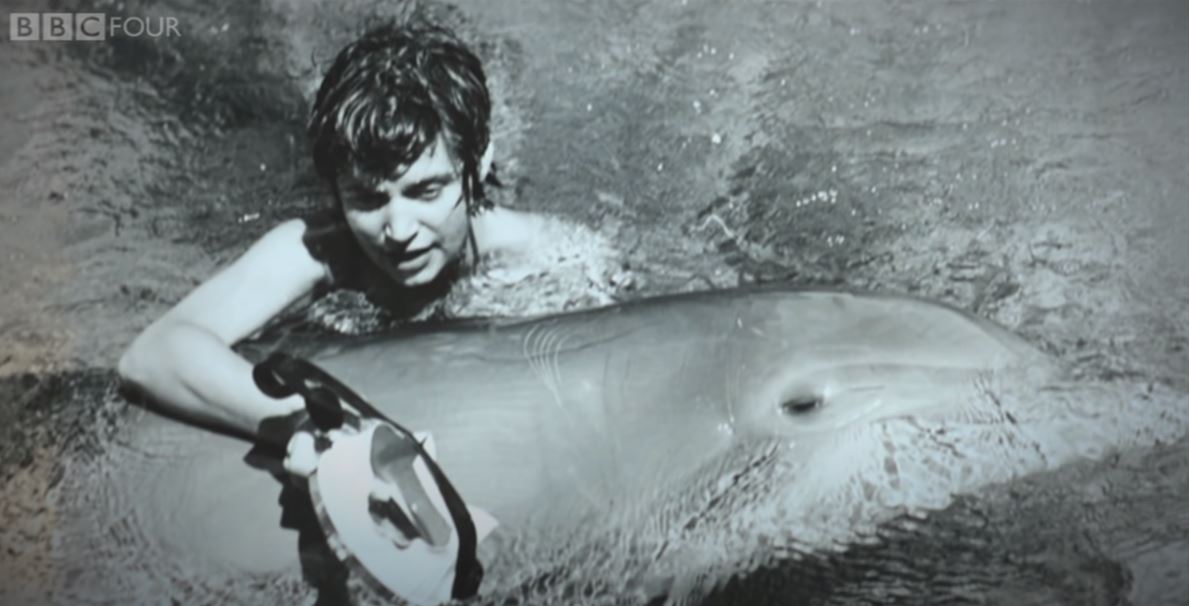 Last week, Expedia made the decision that “attractions and activities” involving performances by dolphins and whales would “no longer be available on their site”.

It followed more than 350,000 supporters campaigning alongside World Animal Protection UK for the change.

Now other travel giants, including TUI, may come under pressure to follow suit.

In 2019, British Airways decided to stop selling tickets for SeaWorld and Virgin Holidays did the same weeks later.

SeaWorld told Travel Weekly that the companies were “succumbing to pressure” from activists.

But it seems there may be a change in public perception towards the activity too, as a 2016 survey of bucket list experiences placed swimming with dolphins in 10th place.

However, for those who still want to try it out in the future, there may be a more ethical alternative just around the corner.

Innovators from New Zealand have developed an animatronic bottlenose dolphin that they hope could replace the performing sea creatures.

The remote-controlled robots carry a £20.8million price tag but creator Roger Holzberg insisted they are more ethical and less costly than the real deal.

“We believe that it’s time to reimagine this industry and that this approach can be more humane and more profitable at the same time,” he told the Guardian. 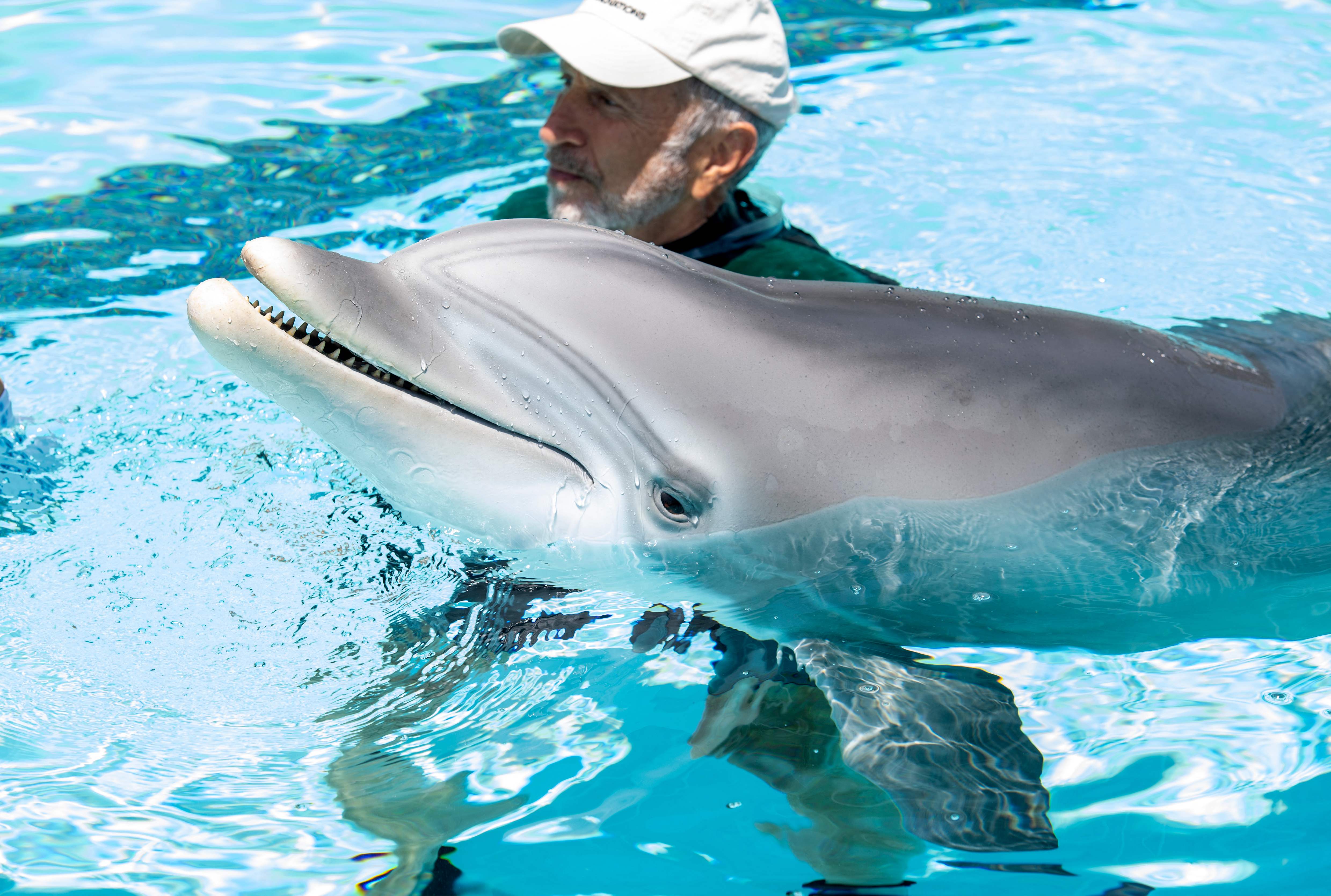