A church leader says Margaret Court’s “bad theology” is his reason for joining the growing list of Order of Australia members who are returning their awards in protest against her elevation to the country’s highest civilian honour.

A growing list of recipients, including retired broadcaster Kerry O’Brien and acclaimed artist Peter Kingston, have either returned or refused awards and others say theirs have been tarnished. 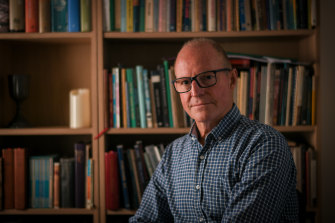 The Reverend Alistair Macrae is returning his Officer of Order of Australia award.Credit:Eddie Jim

As a tennis player, she won 24 grand slam women’s singles titles, but as a Pentecostal pastor she has preached against LGBTQ rights, opposed same-sex marriage and, in 2017, compared homosexuality with Hitler and “the devil”.

The Reverend Alistair Macrae, a former president of the Uniting Church in Australia who was appointed an Officer of the Order of Australia for his contributions to the church and the community, said on Wednesday that he would be handing his award back.

“As a minister and theologian, I am aware that bad theology kills people,” Mr Macrae wrote in an opinion piece for The Age. 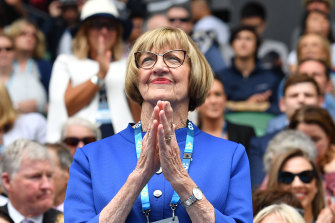 Margaret Court at the Australian Open in 2017.Credit:Getty Images

Court has stated that her religious views are separate from her sporting career, comments which Mr Macrae argued were disingenuous for a public figure.

He pointed to high suicide rates in the LGBTQ community and stressed that Court’s views were not shared by all Christians.

“If it harms people, from my perspective, it’s not from God,” he said.

Melbourne psychologist Suzy Nixon is contemplating whether she should hand back her Medal of the Order of Australia (OAM), which she considers to have been tarnished by association with Court but is yet to make a decision.

Ms Nixon, who was awarded the OAM in 2017 for “services to the community, particularly to women”, said she wanted to see more women recognised and it seemed sexist that male tennis great Rod Laver had been made an AC but Court had not.

O’Brien had been due to receive an Australia Day honour this year but rejected it in protest while Kingston said he would return his.

A handful of recipients have publicly committed to doing the same in the letters page of The Age, including Dr Rodney Syme and Professor Caroline de Costa.

Professor da Costa said she did not wish to be associated with an organisation that condoned Court’s views.

Canberra-based GP Clara Tuck Meng Soo has given up her OAM because Court’s elevation sent “a strong signal that discrimination and prejudice are not only tolerated but honoured in our Australian community”.

“As someone who has lived as a gay man and now as a transgender woman, I am aware of just how deeply hurtful Court’s outbursts can be to my community,” she wrote in an opinion piece.