EXCLUSIVE: The Battle of the Buffet: Hotel names and shames newlyweds for ‘REFUSING to pay £1,150 wedding breakfast bill’ – as couple says they have called in police in row over mini-burgers and ribs

A newlywed couple say they have been dragged into a bitter war of words after hotel bosses who hosted their big day accused them of running up a £1,550 bill for their wedding reception – and running off without paying.

Clare Nattrass and Joanne Robinson say they will pay their bill, but they want £200 taken off because their miserable wedding breakfast buffet didn’t include ribs or mini burgers – and it was whipped away by over zealous hotel staff after just half an hour, before some of their 31 guests had the chance to tuck in.

The couple say the row escalated to such an extent that they had to call police to mediate after they felt threatened by hotel staff at their home.

A spokesman for the Town House hotel in Durham described their buffet claims as ‘nonsense’.

Speaking exclusively to MailOnline Clare said: ‘We’ve been made out to be acting like criminals, it’s ruined our big day.’

The dispute began when the hotel resorted to shaming the couple in a Facebook post which went viral. 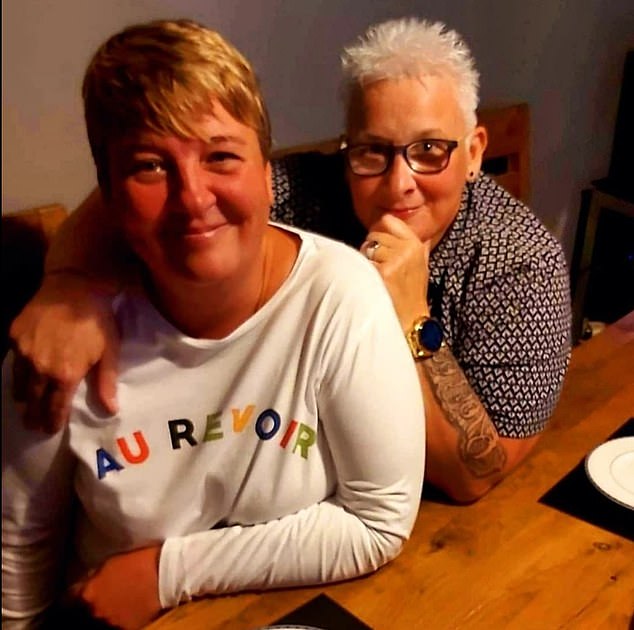 The post included a picture of Clare, 57, and Joanne, 49, with the message: ‘Never in a million years did we think we would have to do this, but this is Joanne and Claire.

‘Joanne and Claire think it’s ok not to pay, in times as tough as they are for businesses, they’ve took the decision to rob our business.

‘They requested to our staff time and time again if they could pay on checkout for their wedding as they don’t get paid until this date.

‘So we gave them the benefit of the doubt because we know times are hard.

‘So they’ve held a wedding at our hotel let us rack up huge food costs and then leave without paying.. I’m so disappointed that someone would do this, they haven’t requested to pay in instalments when we’ve called them and asked them to pay they’ve just outright REFUSED.’

The post attracted thousands of comments criticising the couple.

However they are outraged by the claims, saying they always had a payment plan in place which will be settled as arranged by the end of this week.

As well as £200 for the buffet, they are also refusing to pay the £10 per bottle corkage charge for the 16 bottles of Jam Shed red wine they brought with them, claiming the charge was never agreed.

At their home just half a mile from the Town House, Joanne said: ‘This post by the hotel has completely ruined our wedding day, we are devastated to be accused of refusing to pay the bill as if we are some kind of fraudsters. 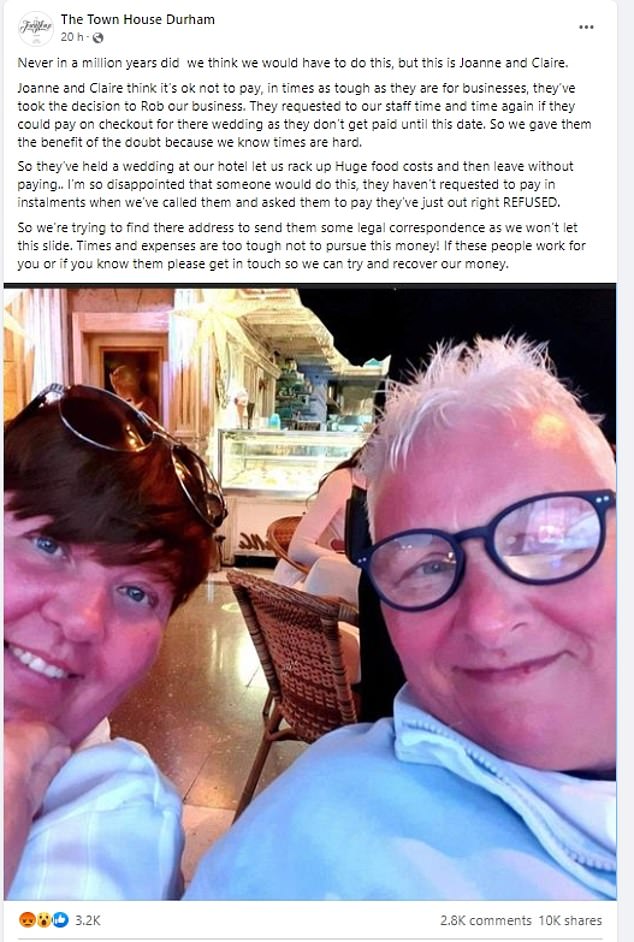 ‘The only parts of the bill we’re refusing to pay is £200 for the buffet at night and the corkage for the wine we brought in.

‘We were promised ribs and mini burgers and they didn’t have either and the food was cleared away after half an hour with many of our guess not being fed.

‘And there wasn’t supposed to be any corkage charge, that was landed on us out of the blue. We’ve contacted Durham trading standards and they are investigating.

‘On Monday people from the hotel turned up at our flat. We were terrified and called the police to say we were under threat. The police came out and they are also investigating.

‘The rest of the bill will be paid later this week once we’ve been paid. This was always the arrangement from day one.

‘To be treated like this is absolutely appalling, I’ve had to delete my social media and we daren’t leave our home, the venue has behaved appallingly.’

Joanne also claimed staff talked over their celebrant during the ceremony and closed down the reception an hour early, leaving guests disappointed.

Mother of one Clare, a former construction worker who had to quit due to being injured in an accident, said: ‘The venue ruined everything for us. It’s now in the hands of the police and trading standards.’

The couple have been together for two years and have been planning their wedding since Joanne, who works as an interpreter, popped the question in a romantic proposal.

‘All their complaints are nonsense. They were aware of the corkage charge and that we wouldn’t be able to provide their mini burgers and ribs.

‘It was agreed beforehand that there would be replacements for those items and they were happy with that. It’s completely untrue as well that the buffet was taken away after 30 minutes.

‘This whole thing has left us feeling very angry and frustrated. Weddings at our venue would normally cost around £5,000 but we helped this couple because we felt sorry for them.

‘They have seen it cancelled already and have been regular customers here so they have ended up have a wedding at a greatly reduced rate.

‘It worked out at £16 a head for a three-course meal, you could barely get that at McDonald’s – and still they left without paying.

‘It’s just very sad when you’ve tried so hard to help people that this is the outcome.

‘Staff from the hotel attended their flat to establish their address and formally request the money we are owed, there were no threats made and it was not in any way a threatening situation.

‘They called the police making all kinds of inaccurate allegations, which was just a waste of police time.

‘We just want the bill to be paid, we’ll even waive the corkage if that’s their problem because we just want to put this behind us and move on as quickly as possible.’