China is accelerating its rollout of coronavirus vaccines across key economic and diplomatic partners including Indonesia, Morocco, Brazil and Turkey.

Britain became the first nation to rollout the US-German Pfizer/BioNTech vaccine for emergency use on Tuesday, but China's rapid vaccine deployment has strengthened its diplomatic heft in the Indo-Pacific and across the developing world.

Five Chinese vaccine candidates are in phase-three trials in at least 16 countries, according to China Briefing. The candidates include CanSino, Sinovac, ZFLongkema and two vaccines made by the China National Biotec Group.

The move to begin vaccinations within 12 months of identifying the virus is without precedent and faster than any previous vaccine in history. Individual countries are now moving ahead of World Health Organisation approval in a bid to inoculate their populations from a disease that has killed 1.5 million people. 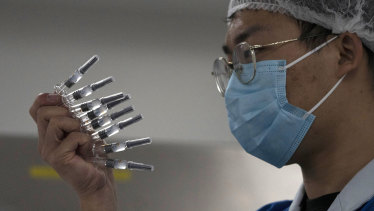 An employee inspects syringes of the SARS CoV-2 at SinovacCredit:AP

The United Arab Emirates’ Ministry of Health on Wednesday AEDT announced the official registration of Beijing’s Sinopharm vaccine after it found 86 percent efficacy against COVID-19 infection based on phase three trials of 31,000 volunteers in the UAE.

Morocco is set to begin a nationwide program using Sinopharm while Turkey and Indonesia are in the final stages of testing China's Sinovac vaccine. Brazil has already purchased 46 million doses of Sinovac, although local testing is not complete. Joao Doria, the governor of Sao Paulo, said on Tuesday the state will begin rolling out Sinovac vaccinations from January 25.

Mexico has bought 35 million doses of the CanSino vaccine, which has been used to vaccinate China's military and is expected to begin rolling out its program before Christmas.

Sinovac has already vaccinated thousands of its employees and has begun selling two doses to the public for $80 at a clinic outside Shanghai.

The company has faced criticism for a lack of transparency after it claimed it had not received any reports of serious side-effects after trialling it on 100,000 people but did not provide any public data.

It is also under a cloud after it was revealed that it had been prosecuted several times in China in previous years for bribing officials to get favourable results on tests of other drugs.

Despite the risks, governments grappling with a third wave and wary of another round of lockdown measures are desperate for a solution to reign in hospitalisations and deaths.

The vaccine acceleration has buoyed global stockmarkets from Tokyo to New York amid rising consumer confidence but raised concerns about transparency of the findings as governments race to protect their population with the first available products.

China, which largely contained the virus by March after it was first detected in Wuhan last December, has been active across the developing world in promoting its vaccines and medical equipment after it received international assistance during the initial outbreak.

Chinese Ambassador to Egypt Liao Liqiang on Tuesday thanked Arab leaders as the Chinese government pledged to help the region.

"We will never forget how the leaders of the Arab countries expressed their solidarity with China via messages and phone calls at its most difficult time of fighting the pandemic," he said.

The United States on Friday AEDST will debate whether to approve the Pfizer vaccine after a 90-year-old grandmother in the UK became the first person vaccinated under emergency authorisation for the vaccine from the British government.

Australia has bought 10 million doses from Pfizer but Australians will have to wait until March to get vaccinated, while millions of doses of the AstraZeneca vaccine will be produced by CSL in the expectation it will be approved.

Prime Minister Scott Morrison on Wednesday said a vaccine "was close" but the lesson of 2020 here and around the world, was to "stay the course, stay vigilant".

Health Minister Greg Hunt said Australia had access to three of the vaccines in stage three clinical trials, which was "a wonderful result".

Unlike the US and the UK, Australia largely contained the virus after an outbreak in Melbourne between May and June, leading to calls for patience as Australia awaits the results of the international programs.

Jeremy Lim, an associate professor in the school of public health at the National University of Singapore, said countries such as Singapore, South Korea and Australia that have managed to suppress the virus should not and likely will not be among the first to vaccinate their populations.

“Singapore might as well wait until the safety profile is demonstrated across millions of people who have been vaccinated [as opposed to the tens of thousands involved in current trials],” he said.

“The economics will be much more favourable after the first 100 or 200 million doses are distributed too.”

China and Australia have signed up to the World Health Organisation's COVAX program which aims to distribute vaccines throughout the world.

But the US has not, giving China a diplomatic opening to reach nations across the Indo-Pacific.

Indonesia and the Philippines, the two countries hardest hit by COVID-19 in south-east Asia, are both looking to China for rapid access to vaccines.

Indonesia President Joko Widodo has touted the arrival of 1.2 million doses of Sinovac’s vaccine from China on Sunday.

Another 1.8 million doses are due to arrive in January, while state-owned pharmaceutical company PT Bio Farma will process a further 45 million doses locally.

But questions remain about the efficacy of this vaccine and, despite promises vaccination would begin in November or December, Indonesia’s Food and Drug Agency chief announced last month it will not grant emergency use authorisation until late January at the earliest.

For China, providing access to a vaccine that could bring under control outbreaks that have laid waste to economies around the world would be a powerful piece of diplomacy.