Three years after announcing the $50 billion Suburban Rail Loop, the Andrews government has released a business case for the first sections of the project, and revealed that the line will be serviced by automated, driverless trains. 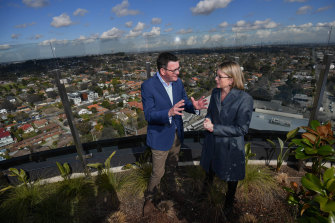 The $50 billion rail loop, connecting Cheltenham in the south-east to Werribee in the west in a loop around the city, is widely expected to cost closer to $100 billion.

The investment case gives a wide range of the financial benefit the line will bring – anywhere between $3 billion and $22.9 billion and also reveals the trains will be automated, which will likely infuriate the public transport union representing train drivers.

The investment case released on Thursday does not examine the costs and benefits of the entire 90-kilometre project, instead focusing on the first two sections to be built – the eastern stretch from Cheltenham to Box Hill and the northern part, from Box Hill to Melbourne Airport.

It finds these two sections have a positive benefit-cost ratio between 1 and 1.7, meaning for every dollar spent on the project, the government will between $1 and $1.70 in return.

Early works start in the eastern section next year and the line is set to be operating by 2035.

More than 430,000 passengers are expected to use both the eastern and northern sections daily by 2056.

It comes amid revelations in The Age that the rail loop project was promised to voters before the 2018 election without a strong planning, transport and economic case.

The project, originally codenamed Operation Halo, was shrouded in secrecy. Consultants on the project were legally gagged from talking about it, while the state’s most senior transport bureaucrat and the government agency tasked with overseeing it were kept in the dark until it was announced.