Billionaire bake off: Bill Gates rustles up an Oreo cake for pal Warren Buffett – complete with his face on top – to celebrate the 90th birthday of the notorious dessert and soda lover

‘Happy 90th birthday, Warren!’ Gates wrote, ‘Of all the things I’ve learned from Warren Buffett (and there have been a lot), the most important might be what friendship is all about.’ 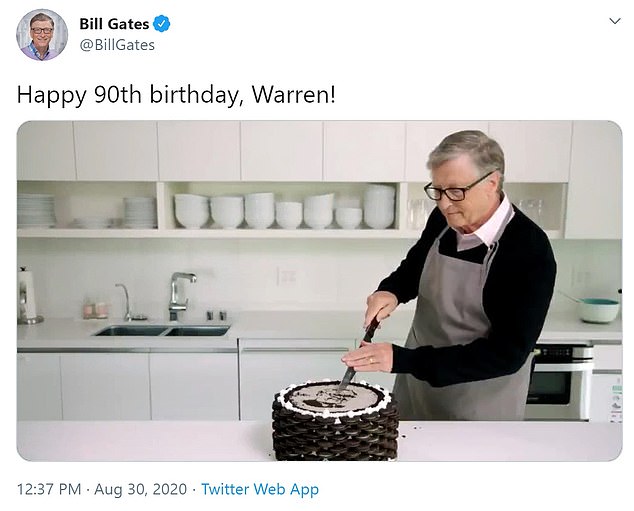 Gates, while wearing a grey apron and playing Randy Newman’s ‘You Got a Friend in Me’ in the background, prepares to make a delicious Oreo cake to honor Buffett.

The clip shows the 64-year-old cracking eggs, whisking flour and sugar, cutting chocolate and blending together an assortment of cake ingredients.

Gates lines the double-decker dessert with rows of Oreos -one of Warren’s favorite treats – dotes it with icing and decorates with cookie dust.

A quick shot of the cake shows a portrait of Buffett’s face drawn in chocolate icing.

The video ends with Gates cutting a slice of the cake, placing it on a plate and setting it on the counter next to the Oreo-dusted message: Happy 90th Birthday Warren. 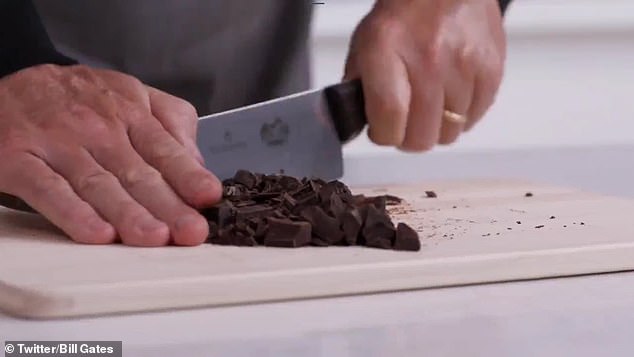 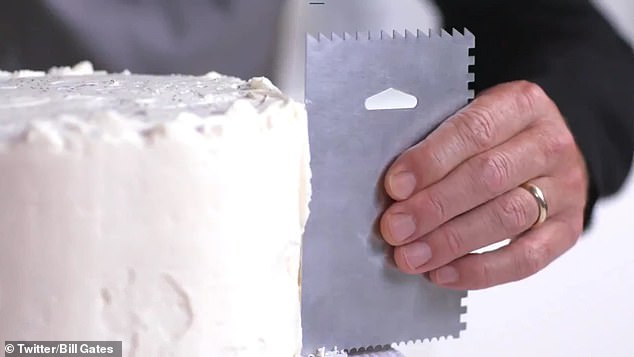 Gates: ‘Of all the things I’ve learned from Warren Buffett (and there have been a lot), the most important might be what friendship is all about’ Pictured: Gates icing the Oreo cake 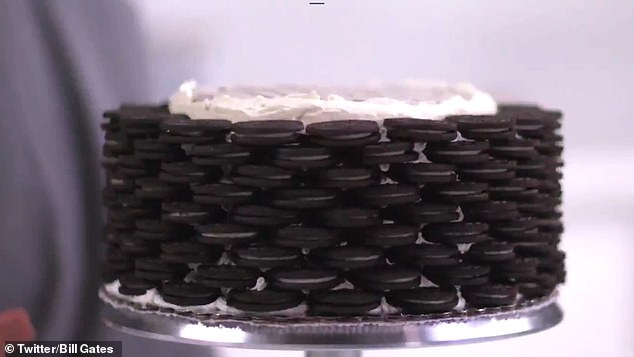 The cake was lined with Oreos and covered in white icing, which is perfect for Warren’s apparent sweet tooth

The cake was a special homage to Buffett, whose notorious sweet tooth has been documented over the years.

In fact, he’s known for drinking around six cans of Coca-Cola daily, as well as being a  large investor in Coca-Cola Co. Berkshire Hathaway, the $520billion company where he sits as chairman and CEO, even owns See’s Candies.

Gates also shared an accompanying blog post on Gates Notes where he continued his well wishes to his friend of 29 years. 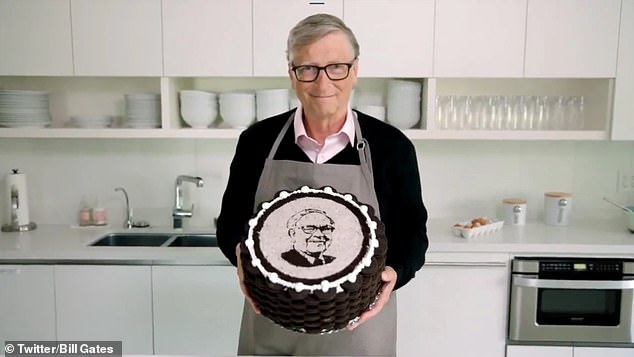 The video ended with a shot of Gates (pictured) holding the finished cake, which has a portrait of Buffett’s face drawn in chocolate icing 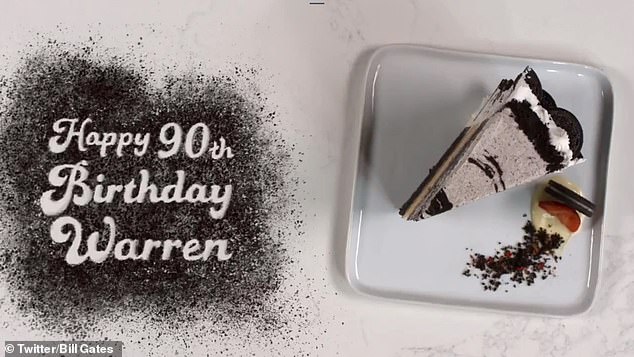 Written with Oreo cookie dust, Gates wrote, ‘Happy 90th Birthday Warren’ on the kitchen counter at the end of the video

‘Warren has the mental sharpness of a 30-year-old, the mischievous laugh of a 10-year-old, and the diet of a 6-year-old,’ wrote Gates.

‘He once told me that he looked at the data and discovered that first-graders have the best actuarial odds, so he decided to eat like one. He was only half-joking.’

The two men discovered they ‘both love math and numbers’ the first time they met on July 5, 1991, so Gates shared a few calculations in tribute.

’30: Number of years Warren has spent sleeping in his lifetime (assuming he gets his 8 hours a night),’ Gates wrote.

‘2: Phone numbers I have on speed dial at my office—Melinda’s and Warren’s,

‘Incalculable: The impact Warren has had on the world by committing to give virtually all of his wealth back to society.’ 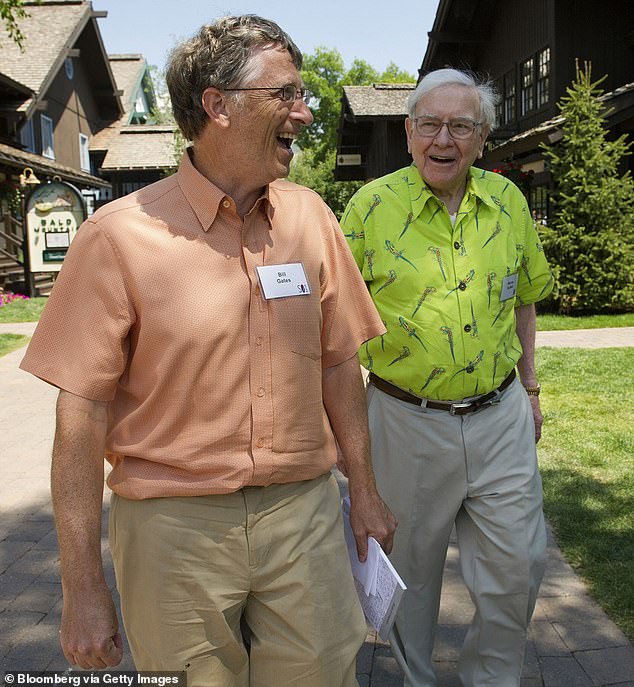 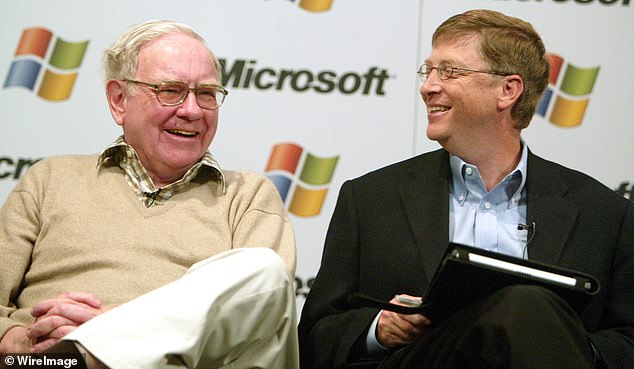 Gates (right): ‘Incalculable: The impact Warren has had on the world by committing to give virtually all of his wealth back to society’

The blog post went on to champion Buffett’s ‘unshakable sense of right and wrong,’ his work ethic and commitment to camaraderie.

‘As Warren himself put it a few years ago when we spoke with some college students,’ Gates wrote, ‘“You will move in the direction of the people that you associate with. So it’s important to associate with people that are better than yourself.

“The friends you have will form you as you go through life. Make some good friends, keep them for the rest of your life, but have them be people that you admire as well as like.'”

The two men first met when Gates’ mother invited her son to their family’s vacation home in Hood Canal, Washington, to met Buffett. 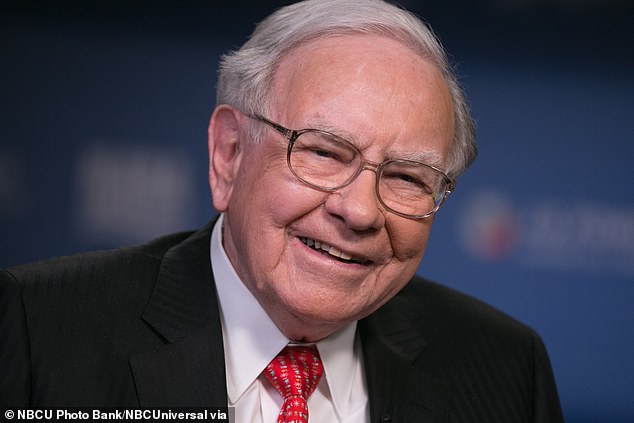 Buffett (pictured): ‘Make some good friends, keep them for the rest of your life, but have them be people that you admire as well as like’

Gates admitted in a previous blog post that he was apprehensive to meet Buffet, but was quickly won over when Buffett asked him a series of thoughtful questions about Microsoft’s future, including how the company expected to compete against IBM.

‘It was a deep friendship from our very first conversation,’ wrote Gates.

Since then, the two men have continued to be leading figures in global business and amassed massive net worths.

Buffett was worth $82.4billion, according to Forbes, who ranked him at No.4 for on the 2020 billionaires list.

Gates came in at a staggering 117.3billion as of Monday, and ranked No. 2 on the same list.

Together, Gates and Buffett founded The Giving Pledge, a philanthropic campaign that encourages the world’s wealthiest people to donate a majority of their wealth to charities and altruistic organizations. 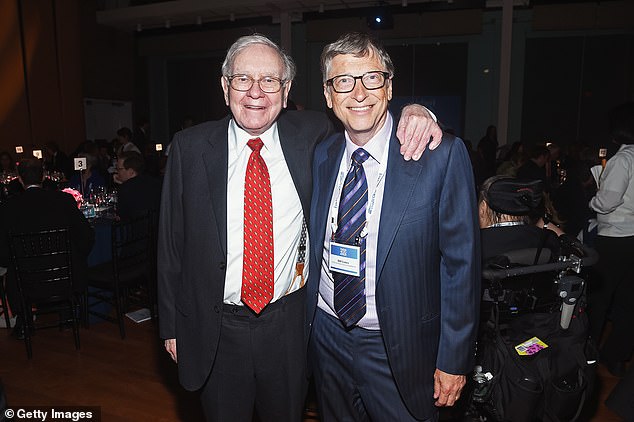 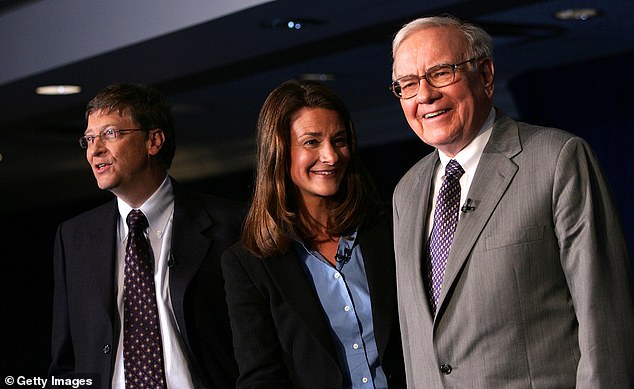 Bill Gated (left), Melinda Gates (center) and Warren Buffett (right) created The Giving Pledge, a campaign to encourage the world’s wealthiest people to donate the majority of their money to charities

The pledge has more than 200 signatories, including Facebook’s Mark Zuckerberg, Michael Bloomberg and Mackenzie Bezos.

Bill and Melinda Gates’ charity, the Gates Foundation, in 2018 became one of Berkshire Hathaway largest shareholders.

But in 2020, Gates left both Berkshire and Microsoft’s boards to focus more of his time on philanthropy.

So far, Gates has donated more than $50billion to charitable causes over the course of his career.