Who knew building a forever home would be such hard work? Just ask Andrew Bogut’s team of lawyers and planning experts who spent much of Thursday debating a stone wall in Victoria’s Civil and Administrative Tribunal.

It was the third day of hearings in the famous basketballer’s appeal against Bayside Council’s decision to knock back his plans for a four-bedroom mansion with a swimming pool, gym, sauna, massage room, roof terrace and, of course, half-size basketball court on Point Avenue.

The tribunal heard from landscape architect Steve Schutt, playing for team Bogut, who defended a wall, described several times on Thursday as fortress-like, around much of the proposed house.

But Schutt said the stone-faced wall would be an appropriate and complementary presence in the neighbourhood.

Under questioning from Bayside’s barrister Chris Wren, QC — yes, they have a QC — about the visibility of the house amid the plants, trees and shrubs planned for the site, Schutt suggested that everyone keep the matter in perspective. 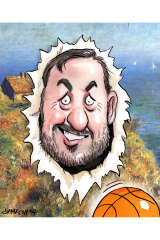 “It’s a two-storey residential dwelling,” the expert witness told the hearing. “That’s what it is.”

It’s been a colourful few days in the virtual hearing room with the inevitable comparison, from one of the objectors, to the classic Australian movie, The Castle. Another opponent of Bogut’s forever home compared the seaside setting to a Claude Monet painting which the former Boomer intended to despoil with his proposed house.

The hearing, already longish by VCAT standards, continues on Friday although one of the VCAT members warned from the bench on Thursday that a fifth day might be on the cards if the parties didn’t “work together”.

Not that it’s taking up much of Bogut’s time. While proceedings were under way on Thursday, the champion basketballer hosted Seven’s Olympic coverage of the Boomers’ semi-final loss Team USA in Tokyo alongside fellow former basketball champ Andrew Gaze.

The Victoria Racing Club has incensed a slew of members this month with a mail-out reminder of annual fees. The Flemington institution, chaired by Neil Wilson, asked for the full annual membership rate as if COVID-19 had not kept racetrack gates shut for the past year.

The fee is $529 for members, guest passes cost $448 and car parks are $102 for the year. Not cheap considering last year’s Melbourne Cup ran as a crowdless — sorry, “spectator-free” — event. But the club is more optimistic for the year ahead.

Wilson’s mail-out predicted the club could host “at least” 60,000 attendees a day during the four-day spring carnival due to be held next month.

Never mind the fact that the Royal Agricultural Society of Victoria announced the Royal Melbourne Show — held just 200 metres from the Flemington track — will be cancelled again because of COVID-19.

VRC members were promised a “make good” for the missed days if the carnival did not proceed as planned. But those in touch with CBD say what they really want is an upfront discount. They point to the Melbourne Cricket Club which gave members a 30 per cent discount on fees to account for COVID-19 match cancellations. In club land, that’s the gold standard.

The US Congress was reminded of its most special friendship on Thursday with the annual accounting of gifts given to senior US officials by foreign leaders. The accounts captured the final year of Donald Trump’s presidency and made intriguing reading.

The former leader was gifted three portraits of himself in 2019 from foreign leaders. Then-Vietnamese president Nguyen Phu Trong gave Trump a painting of himself on dual-pane glass while Egyptian President Abdel-Fattah el-Sisi gifted the POTUS a “large double frame carved from black stone” featuring Trump’s image on one side and the Egyptian coat of arms on the other.

And the third portrait? That one — a photograph — came from Scott Morrison and featured Trump standing alongside wife Melania after the historic state dinner held for the Australian Prime Minister during a much-hyped Washington trip in September 2019.

Other gifts exchanged on the trip — and revealed at the time — included a bronze statue of the late Australian Corporal Leslie “Bull” Allen, awarded the US Silver Star for gallantry for rescuing 12 wounded Americans under fire in New Guinea during World War II. The former first lady received a pair of Paspaley classic stud earrings while soccer fan son Barron was gifted a Socceroos jersey. But news of the photograph remained under wraps until now.

A spokesman for the PM said the gift had been sent after Morrison returned to Australia as a gesture “thanking [Trump and Melania] for the hospitality during the state visit”.

And it’s no wonder Morrison was effusive in saying thanks. The state dinner marked the first time an Australian PM had been hosted at a US state dinner since George W. Bush hosted John Howard in 2006.

The US gift accounts also revealed the apparent disappearance of a nearly $6000 bottle of whisky the government of Japan given in 2018 to former secretary of state Mike Pompeo. The department said it couldn’t find any trace of the bottle and noted there was an “ongoing inquiry” into what happened to the booze. Morrison, for his part, does not appear to have been as lucky.

The PM’s declarations of gifts to Parliament say he received “glasses and chopsticks” and a “silver pin” from former Japanese prime minister Shinzo Abe. Former foreign minister Julie Bishop got a kimono.