Boris Becker gets six-month driving ban and £1,700 fine after being caught speeding twice on same road within four months 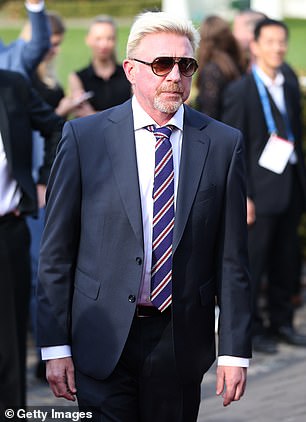 Becker, 51, (seen on July 16 in Germany) first sped through the 30mph A-road in Putney, south-west London, on March 24 last year

Former Wimbledon tennis champion Boris Becker has been banned from driving and fined nearly £1700 after racking up two speeding offences on the same road in four months.

Becker, 51, first sped through the 30mph A-road in Putney, south-west London, on March 24 last year, and was then was caught on a camera speeding down the road again on July 1, 2018, the day before Wimbledon started.

In both cases he was going between 11 and 13 miles an hour over the speed limit of 30 mph.

He already had nine points on his licence for using a phone and speeding.

The former world number one did not appear for his hearing at Lavender Hill Magistrates’ Court this afternoon and was represented by barrister Rhys Rosser.

According to a court documents from May, Mr Rosser was instructed by the solicitors firm owned by ‘Mr Loophole’ Nick Freeman.

But Mr Rosser did not make an application for Magistrates to consider whether Becker could avoid a ban under ‘special circumstances’ and said his client accepted he would be handed a six-month ban.

He said Becker had a ‘high income’ and although no financial details were provided to the court, the sports pundit accepted he could be fined a maximum of £1,000 per offence.

Mr Rosser said: ‘He’s not able to attend and he’s content for proceedings to go ahead in his absence.

‘He accepts that by the imposition of penalty points he becomes a totter and therefore faces a six month disqualification.

‘There’s no application in respect of that. He’s held a UK driving licence since 1996.

‘He asks for a six month disqualification be imposed, he makes no issue in respect of the decision.’

Becker’s lawyer added that the case had taken time to be resolved as Becker may have been prosecuted for another alleged traffic offence from August last year. 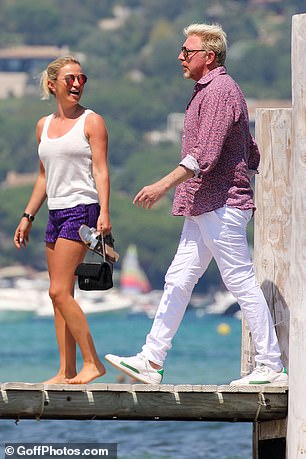 Becker on holiday in St Tropez with a friend on Saturday

He said: ‘It came to be there was a Surrey driving matter that dated to August. That’s been investigated and it’s fair to say they were dragging their heels in court.

‘I can confirm as of the 19 July, Surrey Police confirmed no further action would be taken in respect of any offences.’

Opening the case, prosecutor Matthew Spratt said: ‘On the 24 March 2018 at around 7.20 in the morning the gentleman was driving a Mercedes vehicle in Roehampton Lane. The speed limit was 30mph and his speed was recorded as 43mph.

‘The second offence was on the 1 July at 1.14pm when he was driving a BMW motor vehicle on Roehampton Lane. The speed limit was 30mph and the speed recorded was 41mph.’

The court heard Becker already had nine points on his licence dating back to 2016.

It was said he was handed three points for using his mobile phone while driving in February 2016, and six points for speeding in October 2017.

Magistrates took around fifteen minutes to decide on Becker’s fine and ban.

Boris Becker’s trouble on the roads

July 1 – Caught again going at 41mph on the same stretch of road.

His licence was then endorsed with four penalty points for each speeding offence on top of nine already on his licence.

Becker was also ordered to pay prosecution costs totalling £170 and a victim surcharge of £75, making a total of £1655 to be paid to the court.

Chair of the bench Amanda Otway said: ‘We do not have an income but as Mr Rosser has told us he has implied that his client has high income and therefore we are dealing with it on that basis.

‘And we have taken into account the guidance and that Mr Becker pleaded guilty to the offence on the 1 July 2018 and should be given maximum credit for this.

‘For the offence on the 24 March, his case was proven in his absence. This case has been aggravated by it being the second offence in a very short period of time.’

Now a coach and TV pundit, Becker was declared bankrupt in 2017 and held an auction earlier this month to raise money by selling off memorabilia.