Johnson, at the very last minute on Saturday night, asked the Europeans for a Brexit delay, until the end of January 2020.

In fact, he sent three letters, leaving people to puzzle over exactly which one meant what – and to wonder where Brexit is headed next?

A most excellent question. Because nobody really knows. 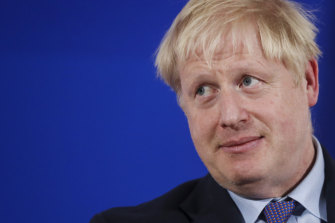 If at first you don’t succeed… Boris Johnson will try again to get British Parliament to vote on his Brexit plan.Credit:Bloomberg

After lawmakers voted 322 to 306 to withhold support for Johnson's new Brexit deal, scuppering his hope of completing Britain's exit plan at an extraordinary "Super Saturday" session in Parliament, the prime minister was forced to fold and seek an extension.

A bill passed last month by British lawmakers mandated that if a deal were not approved by Saturday, Johnson would have to formally seek a three-month extension beyond the October 31 deadline.

With an eye on looming elections? Indubitably.

After the Saturday showdown in Parliament came a kind of Sunday hangover, with the British people, and the Europeans, in a bit of a fog, as they read the morning papers and slurped tea.

Johnson's government announced it was now seeking a "meaningful vote" on his Brexit deal on Monday afternoon – a ballot that Johnson was denied by Parliament's maneuverings on Saturday. 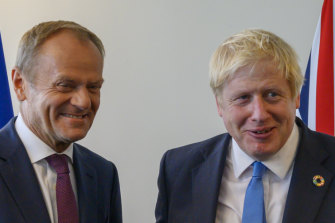 "I will now start consulting EU leaders on how to react," Tusk said.

But Johnson also sent a side letter, a "Dear Donald" letter, to Tusk.

It begins on a personal note: "It was good to see you again at the European Council this week …"

Then gets to the bad news: "Regrettably, Parliament missed the opportunity to inject momentum into the ratification process for the new Withdrawal Agreement …"

Then puts the burden on Tusk: "I have made clear since becoming Prime Minister, and made clear to Parliament again today, my view, and the Government's position, that a further extension would damage the interests of the UK and our EU partners, and the relationship between us."

The Europeans have hit the "pause" button again, waiting to see what happens in the British Parliament this week.

EU diplomats in Brussels told The Washington Post that they will watch what transpires in Britain before deciding how to handle the Brexit delay request.

Tusk will spend "a few days" speaking to EU leaders before coming up with a plan, one diplomat said.

Johnson's multiple-letter strategy is unlikely to have an effect on the final decision, diplomats said.

But EU leaders would prefer to know whether the new Brexit deal has passed Parliament before they decide how long to delay the date and on what terms. There is little question that an extension will be granted.

EU ambassadors gathered Sunday morning for a 15-minute meeting in which they signed off on the Brexit deal and forwarded it to the European Parliament so that it could be ratified this week.

That way, the accord would be squared away, from the perspective of the Europeans, on the off-chance that Johnson manages to win approval in London.

The EU diplomats did not talk about the extension request, two people familiar with the gathering said.

As has been the case through much of the Brexit debate, the Sunday morning talk shows in Britain focused on the political fallout and the artful bobbing and weaving – with not much about what Johnson's deal would mean for economy or the average person. 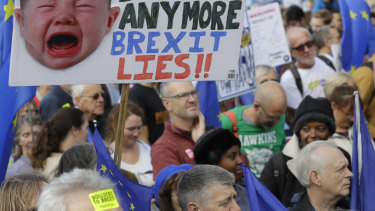 The Sunday newspapers were focused on blame.

The pro-Johnson Telegraph was all sputtering blind-quoted vitriol. "Let's call this what it is," said one furious Downing Street insider, according to the Telegraph. "An act of sabotage."

The Sunday Express banner headline was "Why Won't They Let Us Leave?" and the Mail on Sunday went with "House of Fools."

The Observer and the Sunday Mirror called Johnson's defeat in Parliament the day before "humiliating."