Boris Johnson is making a final push for a Brexit deal amid claims that the two sides are closing in on an agreement.

In signs that negotiations are gathering pace, the PM has cancelled a Cabinet meeting this morning – and the DUP was sighted in Downing Street last night.

Tomorrow looks to be the absolute deadline for getting a settlement in time for a crunch summit in Brussels on Thursday and Friday, although the Finnish PM has warned he believes time has already run out.

Briefing coming out of the discussions suggests the outlines of a ‘hybrid’ customs proposal have been thrashed out.

Sources in Brussels and London told The Telegraph there was now ‘cautious optimism’ that a joint position will be found.

Brexit Secretary Steve Barclay will head to the Belgian capital this morning to meet EU negotiator Michel Barnier and other ministers. Sources told MailOnline no-one was getting ‘overexcited’ about an imminent breakthrough.

However, the tone has dramatically shifted from the weekend, when Mr Barnier warned little progress was being made and demanded more concessions from the UK. The Eurocrat will brief ambassadors on the evolving situation later. 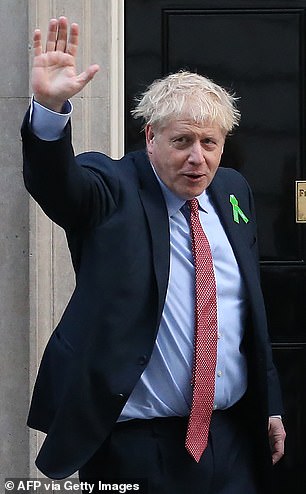 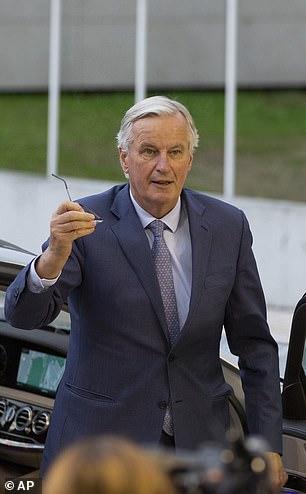 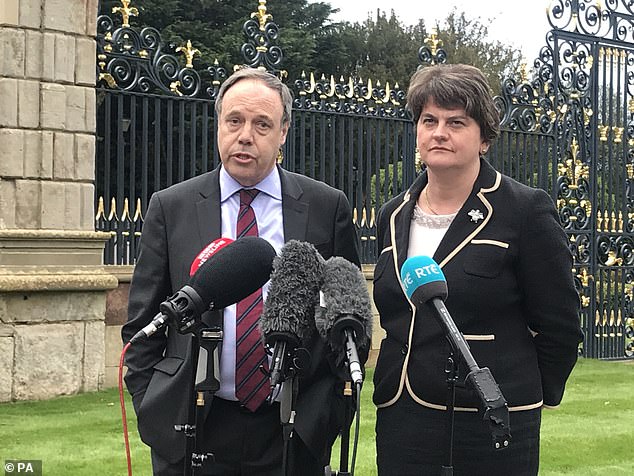 No10 was buoyed yesterday when Irish deputy PM Simon Coveney said an agreement was still ‘possible’ this week.

But Finnish PM Antti Rinne, who holds the rotating presidency of the EU, last night played down hopes of a breakthrough on the Irish border.

‘I think there is no time in a practical or legal way to find an agreement before the EU Council meeting,’ he said. ‘We need more time and we need to have negotiations after the meeting.’

Mr Johnson is anxious to get a deal agreed before Saturday, when legislation requiring him to seek another Brexit delay kicks in.

The PM has said he will lead Britain out of the EU on October 31 come what may. But any attempt to get around the law would lead to a clash with the courts and could spark a Cabinet walkout led by Attorney General Geoffrey Cox.

Downing Street has been tight-lipped about the latest compromise plans, which emerged from head-to-head talks between Mr Johnson and Irish premier Leo Varadkar last week.

But the decision to delay Cabinet will fuel hopes that a deal is close.

A government source said: ‘There is a feeling there is no point holding a Cabinet meeting if the PM can’t brief ministers on the deal and that maybe things will look different in a day or two.’

Sources said the PM was considering a call to European Commission president Jean-Claude Juncker today to help speed up the process. 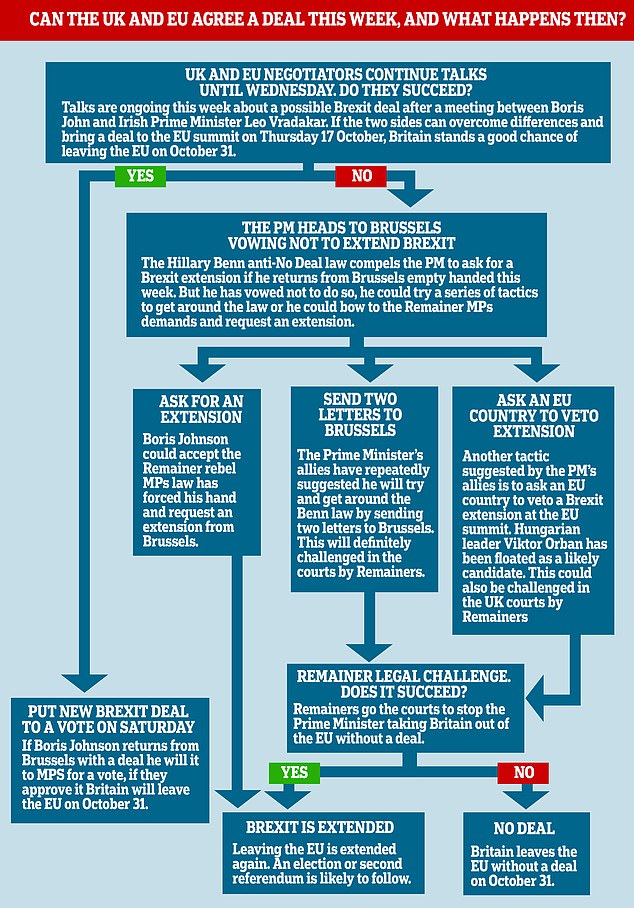 Mr Coveney said it was still ‘possible’ to strike a Brexit deal by the end of the week. He also appeared to suggest that those briefing against Mr Johnson’s new proposal should stop. EU sources say the Republic of Ireland is very keen on Mr Johnson’s latest plan for breaking the border backstop deadlock.

But Mr Barnier previously trashed the plan, insisting it would be ‘very difficult’ to do a deal in time for Britain to leave on October 31.

Brussels sources last night denied divisions between EU capitals and Mr Barnier over his hardline stance, insisting he was not the ‘roadblock’ to a deal.

Despite major concessions made by Mr Johnson, Mr Barnier told EU ambassadors on Sunday night that the UK’s proposals would cause ‘the unravelling of the EU’s customs code’, that they are ‘untested’ and could open up the single market to fraud.

Mr Johnson’s alternative for replacing the backstop is thought to be a dual customs arrangement which would see Northern Ireland subject to EU tariffs on goods, but de facto remain within the UK’s customs jurisdiction.

At the weekend, Jacob Rees-Mogg said he was ready to ‘eat my own words’ and back the ‘dual customs’ plan, which he previously opposed.

However, the Democratic Unionist Party continue to express doubts over the plan.

Arriving for a meeting of foreign ministers in Luxembourg yesterday, Mr Coveney said: ‘I think, as Leo Varadkar has said, a deal is possible and it’s possible this month, it may even be possible this week.

‘But we’re not there yet, and as Michel Barnier said yesterday there is still a lot of work to do, so I hope that we can make more progress today.’