London: Senior British ministers agreed to remove specific references to the Paris climate accord in a free trade deal with Australia after the Morrison government made it clear the new pact should not be used as a tool to force its hand on carbon emissions.

The backdown, revealed in an email leaked to Sky News UK, has prompted claims British Prime Minister Boris Johnson is not applying enough pressure on Australia ahead of the COP26 climate summit in Glasgow in November.

Johnson and Prime Minister Scott Morrison signed the in-principle post-Brexit free trade deal in London in June and negotiators have spent the months since drafting the final terms.

The email shows Britain had wanted to include “a reference to Paris Agreement temperature goals” of limiting global warming to 1.5 degrees, but that was dropped in an apparent attempt to get the deal with Australia “over the line”.

While the deal won’t include specific references to temperature goals or any mechanism to punish either side should they stop complying with the 2015 Paris accord, it will contain language reaffirming both parties’ commitments to emissions reduction.

British and Australian officials played down the email’s significance on Wednesday but the Labour opposition claimed it pointed to a “massive betrayal of our country and our planet”.

The UK’s approach to the Australian free trade deal is a departure from the one it recently struck with the European Union, which includes specific references to the Paris temperature goals.

Australia does not have a blanket ban on referencing the Paris climate agreement in deals; a clean technology partnership signed by Australia and the UK last month notes both sides “share a commitment to the Paris Agreement and its goals”.

However, the view within the Morrison government is that trade deals should not become an avenue for other countries to dictate domestic climate policy.

“I just think if you try to do everything in a trade deal you’ll end up doing nothing,” he told MPs during a committee hearing. “There are other forums to pursue climate initiatives.

“If Britain tries to insist that everything that’s done in Britain has to be exactly replicated everywhere else, it won’t do trade deals. Are we trying to do trade deals or are we trying to reach out from one country and try to dictate to another country exactly how it should do things?” 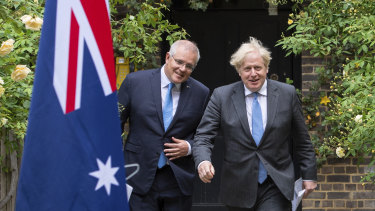 In an interview with Sky News, Tory peer Lord Deben – the chair of an independent body advising the government on climate change policy – blasted the UK’s decision.

“If we’re not prepared to hang our hat on the Paris Agreement – to which we have put our solemn promise and which we have put by law into action in this country – when we are dealing with Australia, which is one of the recalcitrant nations, one of the countries that’s not doing what it ought to do, then really we are not taking the lead at all and to do this at a time before COP26 is very serious,” he said.

“Australia is one of the world’s biggest polluters and key to the goal of limiting global warming to 1.5 degrees,” Miliband said.

“But rather than piling pressure on them, the government has simply rolled over. This is simply a massive betrayal of our country and our planet.”

While the politics of climate change in Britain are far more measured than in Australia, the difficult policy changes needed to achieve Johnson’s goal of cutting emissions by 78 per cent by 2035 is starting to cause some friction within the Conservative Party.

The email was published on the eve of a potential Westminster cabinet reshuffle, prompting speculation its leaking was designed to destabilise Truss and Kwarteng – two of the strongest backers of a deal with Australia.

There has been some talk that Truss may take the prestigious Foreign Secretary post should Johnson decide to demote incumbent Dominic Raab over his bungled handling of last month’s Kabul airport evacuation.

A UK government spokesperson said: “Our ambitious trade deal with Australia will include a substantive article on climate change which reaffirms both parties’ commitments to the Paris agreement and achieving its goals, including limiting global warming to 1.5 degrees.

“Any suggestion the deal won’t sign up to these vital commitments is completely untrue.”