Three British teachers accused of negligent manslaughter after a 12-year-old girl drowned during a school trip to France have arrived in court today, after French prosecutors said the trio should be jailed for three years.

Steven Layne, Chantelle Lewis and Daisy Stathers are accused of the French equivalent of manslaughter by gross negligence following the death of Jessica Lawson in July 2015.

The schoolgirl, who was the youngest child on the trip, became trapped after a pontoon capsized in a lake near the city of Limoges.

A trial at the Palais de Justice in the French town of Tulle heard how Ms Lewis and Ms Stathers began to ‘panic’ after noticing Jessica was missing, with both becoming emotional on the witness stand during Tuesday’s proceedings.

Mr Layne said he thought the pontoon was a safety feature and saw no signs of distress when he looked at the lifeguard after it capsized. 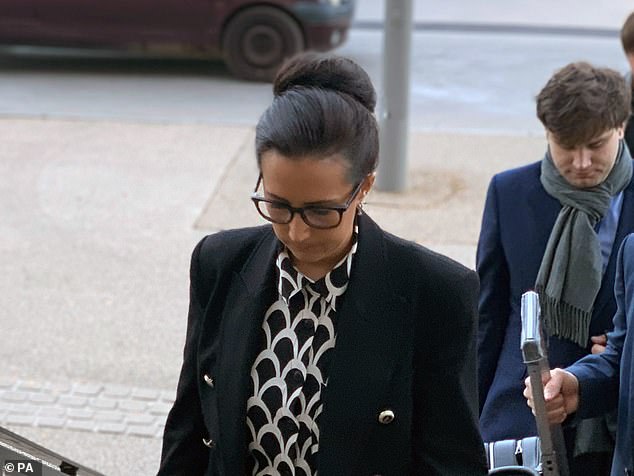 Three British teachers accused of negligent manslaughter after a 12-year-old girl drowned during a school trip to France have arrived in court today. Pictured: Teacher Daisy Stathers arrives at Palais de Justice, Tulle, central France, on Wednesday – where she is accused of of the French equivalent of manslaughter – along with three other teachers 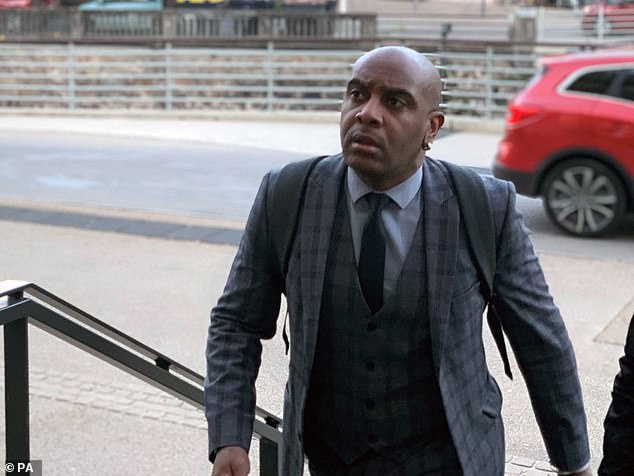 French prosecutors have said the trio should be jailed for three years over the death of Jessica Lawson in July 2015. Pictured: Steven Layne arriving at Palais de Justice, Tulle on Wednesday 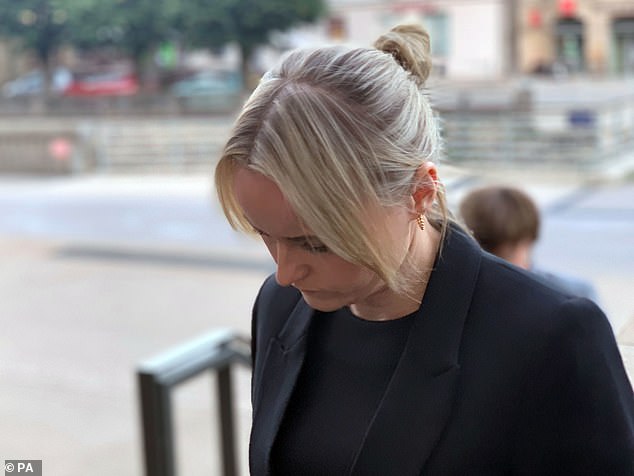 Pictured: Chantelle Lewis arriving at Palais de Justice, Tulle, central France, where she is accused of of the French equivalent of manslaughter by gross negligence following the death of Jessica Lawson. The schoolgirl, who was the youngest child on the trip, became trapped after a pontoon capsized in a lake near the city of Limoges

The youngster’s mother, Brenda Lawson, told the court she expected the teachers from Wolfreton School in Willerby, near Hull, to have ‘respect and integrity’ during the trial, while saying she received little support from the school, teachers or the UK.

She said that only during the trial’s proceedings did she learn the sequence of events that led up to her daughter’s death, and that neither the school nor teachers had provided her with an explanation in the seven years since.

Jessica, who was 12 when she died, would turn 20 on November 7 this year if she was still alive today, Ms Lawson noted.

During her closing speech, prosecutor Myriam Soria told the head of jurisdiction in Tulle, Marie-Sophie Waguette, she recommend three years’ jail time for the three teachers, as well as lifeguard Leo Lemaire.

Ms Soria also advised Ms Waguette that the local authority in the town of Liginiac should be fined 45,000 euro for its alleged part in Jessica’s death.

In her speech, the prosecutor said: ‘Jessica Lawson was a good swimmer. She was a little girl. Her swimming should have been monitored with vigilance.’

Ms Soria said none of the teachers could see where Jessica was during the swim due to a lack of surveillance.

Addressing the pontoon itself, the prosecutor said the local authority ‘knew about instability and knew about its age.’

Jessica’s parents, who have followed proceedings through an interpreter, are set to find out whether their daughter’s teachers are guilty on Wednesday.

Speaking on Tuesday, Brenda Lawson told the court her family had been through ‘torturous suffering’ since her daughter’s death. 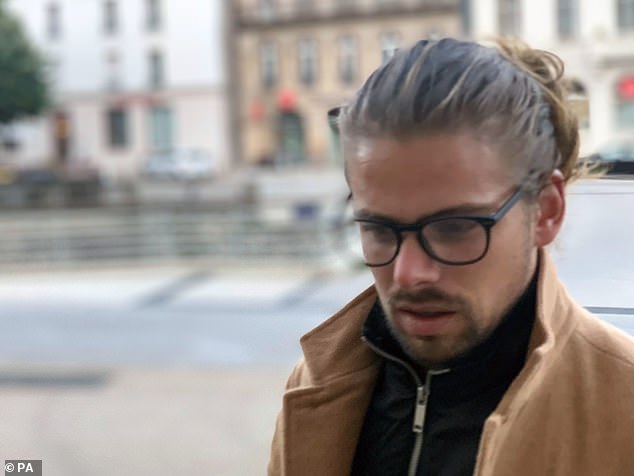 Pictured: Leo Lemaire, who was a lifeguard at the scene, is also facing three years over Jessica’s Death. He is seen here arriving to court on Wednesday

She also criticised the response from the UK and Wolfreton School to Jessica’s death, saying they ‘did not provide us with any answers or help in any way’.

Asked to describe the schoolgirl, Mrs Lawson told the court: ‘To describe Jessica is easy really. We use the word sunshine and the brightness still remains in my life. She was full of fun, laughter and care.

‘She was just on the cusp of becoming a delightful young lady.’

Mrs Lawson continued: ‘For me, she should be 20 on November 7 this year, so it has been seven years for me and my family of what can only be described as torturous suffering of not understanding what happened to her or why.

‘For that reason I would personally like to thank the French justice system for taking it seriously. From second one, they treated it with the severity it deserved and they investigated it straight away. 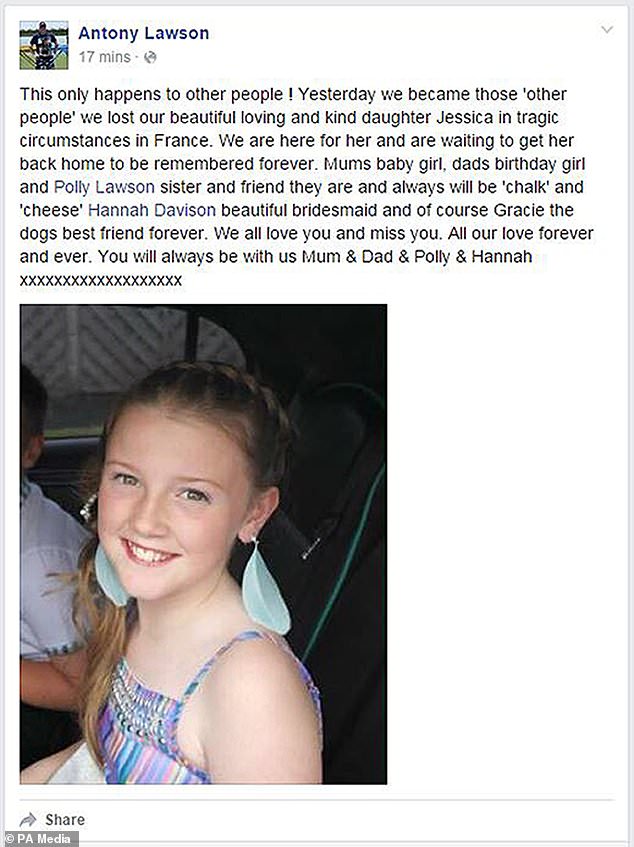 Pictured: A post made by Antony Lawson, Jessica Lawson’s father, on Facebook after her death in France in 2015, along with her picture

‘Sadly for my family, in the UK we did not get that response whatsoever. The UK did not provide us with any answers or help in any way.’

Addressing how Jessica’s death had affected her and her family, Mrs Lawson said: ‘Most of our family’s holidays, most of our family’s free time was to do with swimming and water. So as a parent and as a family, for Jessica to drown is the most awful thing that could have possibly happened to her.

‘We can’t look back on memories because there’s water everywhere – we have struggled for many, many years to face the present that we were left with.’

Mrs Lawson added: ‘I handed over my parental responsibility to other people.

‘She had only been in the camp for 48 hours when I was called on my mobile phone from the school to tell me that Jessica had been involved in a serious accident and that she had been under water for a considerably amount of time.

‘They then gave me the telephone number of the hospital in Limoges for me to ring and speak to the resuscitation ward.

‘So for me that’s been the worst thing for a mum to accept – that I wasn’t there to protect her and take care of her and say goodbye to her.’

Mrs Lawson went on to speak about a meeting she and Jessica’s father Tony had had with the school a month before the trip – adding that they had provided families with a booklet which said children would be supervised at all times.

Speaking about the meeting, Mrs Lawson said: ‘We just went to the front and said ‘she will wear a life jacket when she’s doing any of these activities?’ and they said yes.’ 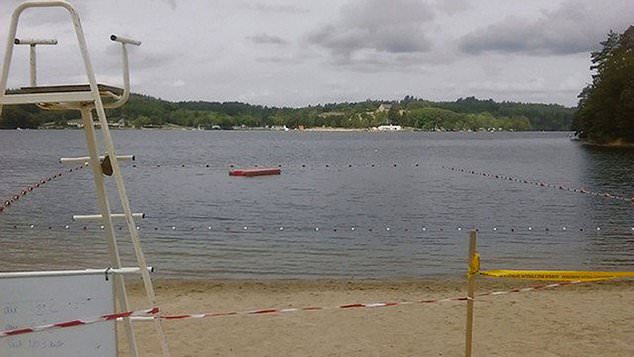 Pictured: The scene near Meymac in the Massif Central region of France where Jessica died

The head of jurisdiction in Tulle, Marie-Sophie Waguette, asked Jessica’s mother: ‘Do you have any idea what happened to your daughter?’

Mrs Lawson replied: ‘Not really because from the beginning it was never made clear to us what happened and why there was a pontoon. We never fully understood or it was not explained to us why she was in the water.

‘It is only today that I have understood that she had done hiking and kayaking and then this swimming.

‘I didn’t know the series of events because after that initial meeting in France with the lead teacher, the UK school and teachers refused to discuss anything else with us.

‘If I’m truthful, listening to people trying to explain here what they did for Jessica, it is not really any clearer because I was expecting those who had a duty of care for her to be open and transparent and to have respect and integrity for her mum in the way they have handled themselves here.

‘It is a phrase I didn’t understand before this happened and it is a phrase called ‘moral compass’ – to do the right thing.

‘Really, no matter what the outcome is for my family, we have lost.’

Mrs Lawson said she wanted to finish her opening remarks with words from her daughter’s secret diary, which read: ‘My future ambition is to become a nurse. The thought of others in need devotes me to do well and succeed in my career path.’