The brother of bigwig fraudster Nino Napoli has pleaded guilty to swindling Victoria’s Education Department, just days after his sibling was jailed for doing the same.

Robert Napoli, Nino’s younger brother, on Monday admitted conspiracy to defraud during a short appearance before the County Court. 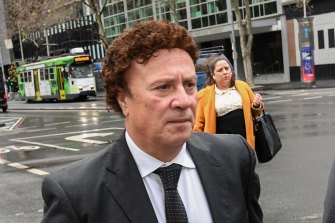 But prosecutors announced they were no longer pursuing the same charge against Robert Napoli’s wife, Domenica, who sat next to her husband on a video link as he pleaded guilty.

The developments came five days after Nino Napoli and cousin Carlo Squillacioti were jailed for defrauding the Department of Education and Training from 2007 to 2014, when Nino Napoli abused his position as head of the department’s finance unit – where he was responsible for a $5 billion budget – to approve contracts to companies run by family members.

As the architect of the department’s “banker school” scheme, where designated schools receive money to share with nearby schools, Nino Napoli approved fake invoices and dodgy contracts totalling $500,000 by concealing his connections to relatives’ businesses, and either used department money or directed banker schools to pay invoices.

Under a plea deal, prosecutors accepted Nino Napoli’s personal benefit was $95,000, part of which he spent on a television, wine, an iPad and his signature toupee. 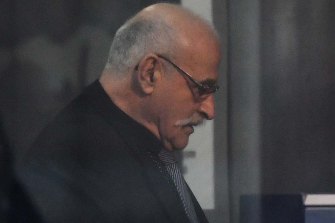 Squillacioti is a motor mechanic but was also the director of printing and IT companies that were awarded department contracts, despite the businesses lacking the equipment to carry out the works. Under the plea deal, prosecutors accepted he personally benefited by $58,000.

Nino Napoli, 65, was last Wednesday jailed for three years and 10 months and must serve one year and 11 months before he is eligible for parole. He is also being sued by the state government for further funds it alleges were swindled.

Judge George Georgiou jailed Squillacioti, 63, for two years and five months. He must serve 15 months before he is eligible for parole.

Both men pleaded guilty to one charge each of conspiracy to defraud and conspiring to pervert the course of justice.

Robert Napoli, 52, pleaded guilty to being part of a conspiracy that defrauded the department from 2007 to 2010. He told the court he now runs a mowing business.

He had his bail extended to appear in court for a plea hearing on September 6. Domenica Napoli, 52, had faced one charge of conspiracy to defraud until prosecutors dropped the charge.