Two brothers in Missouri were charged Tuesday with allegedly shooting a man in front of his four young children in a road-rage encounter, authorities said.

Joseph was driving through St. Louis County on Monday while his brother was in the passenger seat of a Mitsubishi GTS when they got into a road-rage situation with another man, Scott Thomas, the St. Louis Post-Dispatch reported. 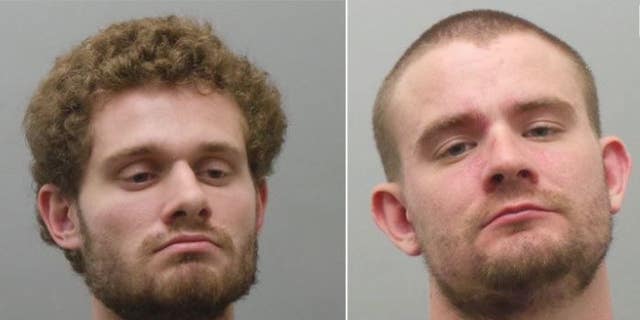 Joseph Marino, 24, left, and Nicholas Marino, 27, are charged over the shooting of a father of four in front of his children.
(St. Louis County Police Department )

They saw Thomas, 46, pull over and take down their vehicle's license plate number, prompting them to pull over as well, prosecutors said. Joseph Marino allegedly pointed a gun at Thomas while Nicholas allegedly got out and fired three shots at him, wounding him in the chest and side.

Thomas was taken to a hospital with non-life threatening injuries, KSDK-TV reported.

Thomas, a barbecue aficionado with a large social media following, was with his children, ages 11, 9, 6 and 3 years old. They were in the car and were unharmed.

The brothers were stopped by police shortly after for allegegedly using the shoulder of the road to pass traffic.