A murder suspect described by authorities as a “crazed man” accused of fatally stabbing a California woman and her dog in a seemingly unprovoked attack in broad daylight will appear in court on Monday.

Ricardo Saldivar, 23, of Upland, California, will make his first court appearance this week after being medically treated for head injuries suffered after a good Samaritan, in an attempt to stop the knife-wielding rampage, hit the suspect with a rock, knocking him unconscious.

JUVENILE SUSPECT IN MURDER OF VIRGINIA GIRL HELD WITHOUT BOND

The stabbing happened Thursday at about 1:35 p.m. near Lone Hill Park in San Dimas, a city in the San Gabriel Valley of Los Angeles County. Jeanne Ann Edgar, 66, of Glendora, California, and her dog, Sashi, were both pronounced dead at the scene, KCBS-TV reported.

Another victim, identified by authorities as a White man in his 30s, said he had parked his truck and was walking through the park toward the public restroom when Saldivar began approaching him while wielding a knife. The man turned and ran from the suspect, who at first chased after him but then changed his focus to Edgar and her dog, according to the Los Angeles County Sheriff’s Department.

“I see in my peripheral vision, this guy – he looks like he’s deranged and on drugs,” the male victim, who identified himself to local outlets as Joe, told KNBC. “He approaches me, and he says something along the lines of ‘I’m going to kill you.'” 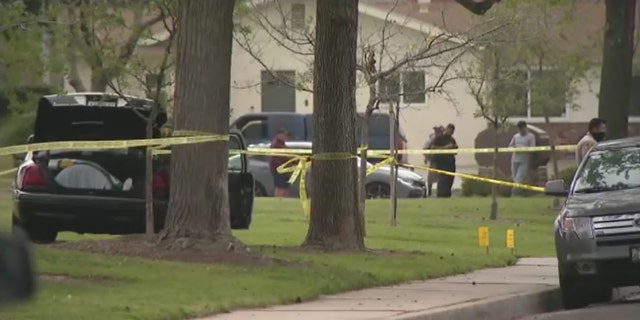 A woman and her dog were fatally stabbed near Lone Hill Park in San Dimas, a city in the San Gabriel Valley of Los Angeles County (KTTV).

The suspect grabbed the woman’s dog by the leash and yanked it free of her grasp, the sheriff’s department said, and then stabbed both the pet and its owner. The male victim, witnessing what was happening, got out of his truck and managed to strike the suspect in the head with a rock, knocking him unconscious before deputies arrived to make an arrest.

“I threw it as hard as I could and it hit him and he fell over. And at that point, I see a bunch of neighbors everywhere – people yelling,” the male victim said. “It was a horrific scene.”

Deputies from the San Dimas sheriff’s station responded to Lone Hill Park regarding a call of an assault with a deadly weapon in progress, the department said, adding that the “call indicated a woman was screaming and later updated indicating a woman was being stabbed.”

Upon arrival, deputies found a woman lying unresponsive in the street, appearing to have sustained multiple stab wounds. She was pronounced dead at the scene. A dog was lying dead next to her. A knife was also recovered at the scene.

After he was medically released, Saldivar was booked into jail on suspicion of murder and attempted murder. He remained in jail on $2 million bail and was scheduled to be arraigned Monday, according to Fox 11 Los Angeles. Authorities so far have not released a motive.