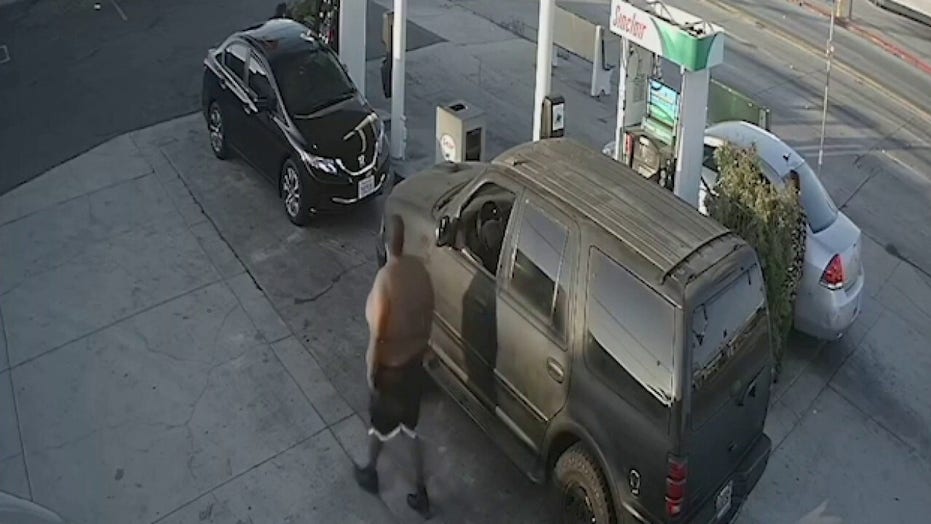 A woman pumping gas in Gardena, Calif., was severely beaten last week in what authorities believe was a random attack.

The California woman who was severely beaten while pumping gas in an unprovoked, random attack last week said she continues to live in fear even after the suspect’s arrest, according to a local report.

Surveillance footage captured the shirtless suspect calmly leaving his SUV and walking over to the woman just after 7 p.m. on May 30 in Gardena, a city about 14 miles south of Los Angeles, before he began to viciously punch her. Police described the suspect as a 6-foot-tall, 300- to 350-pound Black male.

The victim, who did not wish to be named or have her face shown, detailed the traumatic experience to KABC-TV.

She said she’s been constantly “nervous and afraid” and hasn’t even returned to work since the attack.

The woman described how she yelled for help as the suspect punched her and grabbed her hair, slamming her head against her car and onto the ground multiple times, but no one immediately came.

Bystanders can be seen on video gathering near the pump during the attack but none appear to intervene. The suspect calmly walked back to his vehicle and drove away, the Los Angeles County Sheriff’s Department previously said.

The woman was treated at a hospital for injuries to her head and face. She has since been released and is recovering at home.

She told the station that her daughter now wants to become a police officer to prevent anyone else from being attacked like her mother.

Authorities said a man believed to be the suspect was detained Friday in Long Beach, FOX11 reported. The suspect was also believed to have been involved in another attack a day earlier on a 63-year-old woman in the same area.

On Monday, KABC identified the suspect as 37-year-old Antoine L. Rainey after his mother saw local reports about the attack on TV and reported her son to police.

Police said Rainey, who was on parole at the time of the two attacks, suffers from schizophrenia and has a violent criminal history, according to the station. His mother reportedly said he hasn’t been taking his medication.

Rainey was expected to appear in court on Tuesday.