McConnell: Capitol mob was ‘fed lies,’ ‘provoked by the president’

Federal Magistrate Judge Michael Harvey called the charges against Jackson “very serious,” adding that Jackson apparently had admitted he is the person in pictures and video shown repeatedly striking a Capitol Police officer with a bat.

Harvey told Jackson and his attorney that he could think of no combination of conditions that would allow him to release Jackson and ensure the safety of the community. “People did die that day and it could have been even worse,” said Harvey, calling Jackson a “willing participant,” in the “violent attack” on the Capitol. 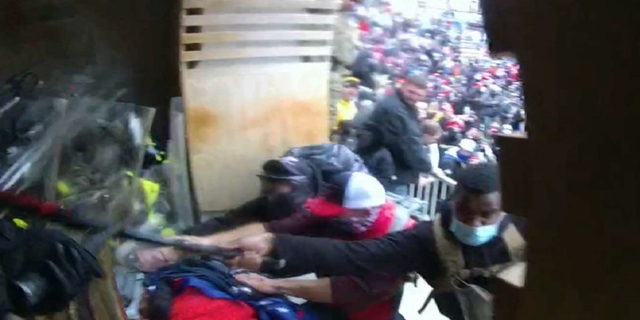 There has been not yet been a formal arraignment in this case, but Jackson’s attorney indicated that the defendant is planning to plead not guilty in the case.

Jackson faces five federal charges, including assaulting an officer with a deadly weapon and obstructing an official proceeding at the Capitol. Each of those counts carries up to 20 years in prison. Court documents filed by the prosecution show several pictures, and a video, of the man they say is Jackson swinging a baseball bat at Capitol Police officers during the events of Jan. 6.

Government prosecutors say Jackson was one of the first people to storm through the doorway of the Senate side of the Capitol building and struck an officer with his fist at that time. Jackson is accused of attacking Capitol Police again hours later with a bat.

Jackson will next appear in court for a preliminary hearing on Feb. 29 at 11:30 a.m.